The fed continues to print massive amounts of dollars out of thin air. The US dollar is fundamentally and technically very weak and headed for even lower levels. Once the psychologically important support at 80 is broken, we expect a dramatic sell-off of dollars around the globe. We are in the early stages of a massive global currency debasement which will see tangibles, and most particularly gold, rise significantly in price.

Gold is bought and sold in U.S. dollars, so any decline in the value of the dollar causes the price of gold to rise. The U.S. dollar is the world’s reserve currency – the primary medium for international transactions, the principal store of value for savings, the currency in which the worth of commodities and equities are calculated, and the currency primarily held as reserves by the world’s central banks. However, since it has been stripped of its gold backing, the dollar is nothing more than a fancy piece of paper.

Money supplies all over the world are increasing – 10% per annum in the United States, 10% in Europe, 14% in Asia. The printing presses are working over time and eventually the chicken must come home to roost… 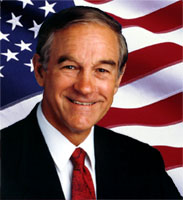 The greatest threat facing America today is the disastrous fiscal policies of our own government, marked by shameless deficit spending and Federal Reserve currency devaluation. It is this one-two punch – Congress spending more than it can tax or borrow, and the Fed printing money to make up the difference – that threatens to impoverish us by further destroying the value of our dollars.” – Ron Paul

I assume most of our readers are familiar with Ron Paul, given his calls for a commodity-backed currency. He is also a strong advocate of individual liberty, limited government, low taxes and free markets. He was one of the few politicians to vote against both the Patriot Act and the Iraq War. Dr. Paul has long been my favorite politician and offers a true alternative to the sell-outs running for President in 2008. Check out www.ronpaul2008.com for details on his election campaign, platform and voting record.

The shock has started to wear off as the reported levels of government spending and debt keep rising to ridiculous amounts. I have borrowed the following text from The Mogambo Guru who not only summarized the key statistics succinctly, but always manages to bring a dose of humor to subject matter than can otherwise be on the dry side (SMTCOBOTDS).

The U.S. federal government spent more money in March than in any other month ever. Ever!

In total, “Excluding the Social Security and other trust funds, the deficit totaled $108.2 billion in March and $347.8 billion for the fiscal year so far.” That’s about $700 billion!

And all of this excessive spending, made possible by the excessive creation of money and credit by the Federal Reserve, means that prices will go up excessively. And sure enough, from Bloomberg.com we read that the Labor Department released the nightmarish news that that U.S. consumer prices, as measured by the Consumer Price Index, rose 0.6% (including food and energy prices) in March, which is even higher than February’s 0.4% increase.

It’s a good thing that they are excluding energy costs in reporting inflation, as “Energy prices jumped 3.6 percent last month after increasing 3.5 percent the prior month. The price of gasoline rose 8.7 percent, the most since November, and natural gas costs increased 3.3 percent”! Yikes and yikes again! – Mogambo Guru

The following film is mandatory viewing for gold bugs. While the beginning of the film focuses on the idea that the income tax on personal wages is illegal and unconstitutional, the remainder of the film goes into the creation of the Federal Reserve, currency debasement, Nixon taking the U.S. off the gold standard and plenty of other information critical to understanding the direction of the dollar and the price of gold. Click on the following link to view: America: Freedom to Fascism.