In the face of a declining overall energy market today, three of our favorite alternative energy stocks posted strong gains on high volume.

First on the list is our favorite wind energy play, Welwind Energy International (WWEI). We recommended Welwind during October of 2006, when it was trading around $0.07. It closed today at $0.18, up 26% on 4X average trading volume. That is more than a 900% gain in the six months since we first initiated coverage on Welwind.

Next on the list of breakout stocks today is Nova Biosource Fuels (NVBF). Nova just announced a move from over-the counter to the AMEX, which will be effective on Monday, May 14. Nova recently held its official groundbreaking ceremony at the site of its planned biodiesel refinery in Seneca, Illinois. The plant is expected to have a 60-million-gallon per year biodiesel production capacity from locally generated, low-cost feedstocks, including rendered animal fats and oils and recycled vegetable and animal- based greases. Nova’s stock price increased by 4.5% today on 12X normal trading volume.

Our final stock is getting its first mention on Gold Stock Bull today. Despite being the darling of the ethanol investment community and attracting funding from none other than Bill Gates, we have been hesitant to recommend Pacific Ethanol (PEIX). We watched the stock quadruple during 2006 from $10 to nearly $45, but couldn’t see any fundamental justification for the rise and held off. PEIX has since retreated to around $15 in an overall downturn amongst ethanol producers.

So what is driving our optimism with Pacific Ethanol? A shift from hype to substance. The Sacramento, Calif.-based company swung to a first-quarter profit, earning $1.9 million, or 5 cents per share. During the same quarter last year, Pacific Ethanol lost $612,000, or 2 cents per share. This first-quarter profit was generated from revenue that more than doubled to $99.2 million from $38.2 million. Pacific Ethanol sold 37.5 million gallons of ethanol, almost twice as many as it did a year ago, and ethanol prices were up more than 20 percent.

Pacific Ethanol’s share price responded by climbing 9.1% on 6X normal trading volume. Despite fears by some investors of an oversupply in ethanol during the back half of 2007, we believe PEIX will continue pushing higher. We have a price target of $22 for 2007, which is a 47% increase from the current price. The chart below shows clear support at $15 and we believe a bounce off this price floor is imminent. 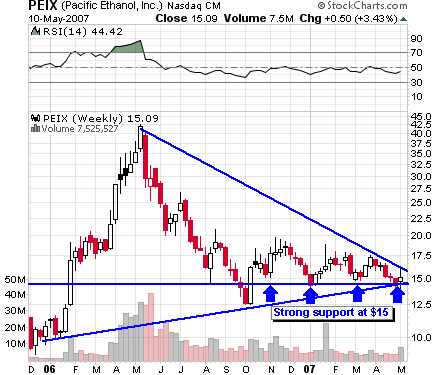 Pacific Ethanol currently has one plant operational, one plant about to open and three other plants under construction. The operational plant is located in Madera, California and has a capacity of 35 million gallons per year. It is the largest ethanol plant on the west coast.

Their second plant is being constructed in Boardman, Oregon and will also have a capacity of 35 million gallons per day. Construction is scheduled to be completed in the next few months.

The energy bill passed by Congress in 2005 requires an increase in ethanol use by refiners to 7.5 billion gallons by the year 2012. With Democrats now controlling both houses and looking likely to take over the presidency, we can only expect additional government incentive for alternative energies such as ethanol.

A significant portion of Ethanol demand is coming from the fact that states across the country have banned MTBE (Methyl Tertiary Butyl Ether), a fuel additive formerly required to increase octane levels of gasoline. MTBE has found its way into drinking water and many believe is cancer-causing. Ethanol is the only other commercially viable additive that will bring gasoline into compliance with state and federal clean air regulations. Consumption and production of ethanol has continued rising at a record pace and should be considered as part of any investment portfolio.