Last year was incredible by all accounts. The average gain for the year in our model portfolio was 330%. That isn’t a typo. We’ve had a triple digit year once before and double-digit years several times, but this was the best year of our portfolio performance by a comfortable margin. Most of those gains came from two sectors, which I will discuss in Part 2 of this article.

2018 hasn’t been nearly as kind to us. The portfolio started the first few weeks strong, climbing to double-digit gains in January, but then got trounced by sharp corrections in the months that followed. It has bounced back over the past few months, but is just barely in the green year-to-date.

Despite the relatively weak first half of the year, I remain convinced that we are going to close the year strong. I have high expectations for the back half of the year, as I believe capital will begin flowing into a few key undervalued and oversold sectors.

The remainder of the article will lay out my case for three sectors to avoid and three sectors to buy aggressively during the back half of 2018. As always, this is just my personal opinion and not investment advice.

I will admit that I have been wrong about this call for a while. When equities tripled in value from the late 2009 bottom to mid-2014, I was convinced that the stock market had run too far, too fast. A move of that magnitude could hardly be justified by papering over the much deeper fundamental issues that caused the financial crisis? Right?

The market certainly liquidated a large amount of  mal-investment and toxic assets. This was an incredibly helpful reset, which almost always occurs to the benefit of the wealthiest in society and the expense of the middle and lower classes. The markets lost nearly 9 million jobs and the GAO (Government Accounting Office) estimated it cost the economy over $22 trillion.

The image below shows what various amounts of money look like stacked up next to a person. Do you see the man at the bottom of the image below? The close-up is him standing with just the corner of what looks like a football field of $100 bills stacked waist high. This is what one trillion dollars looks like. 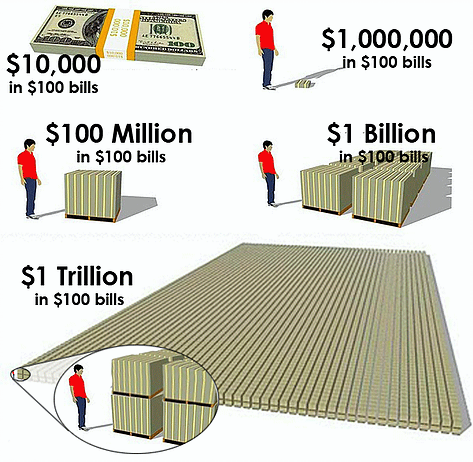 Now multiple that by 22 to get some feel of how much was lost by the reckless gambling of Wall Street and government meddling in the markets! Yet, the economy recovered in grand fashion with the S&P 500 rocketing over 4 times higher to new records. The official unemployment rate has dropped to the lowest level this century, at just 3.9%.

However, all of this rapid growth has come at a price. The debt has shot dramatically higher and the market is once again over-leveraged. Margin debt is at an all-time high, as with consumer debt, college debt, government debt and overall global debt. The human race is awash in a sea of debt.

Of course, the debt is just money that was created out of thin air with interest attached. Interestingly, there is not enough money in existence to pay off all of the debt accumulated. It is just a powerful tool used by central bankers to concentrate and control the majority of the world’s valuable resources. Just Google “money created out of debt” and click on any of the handful of excellent documentaries for the back story on how this occurs. 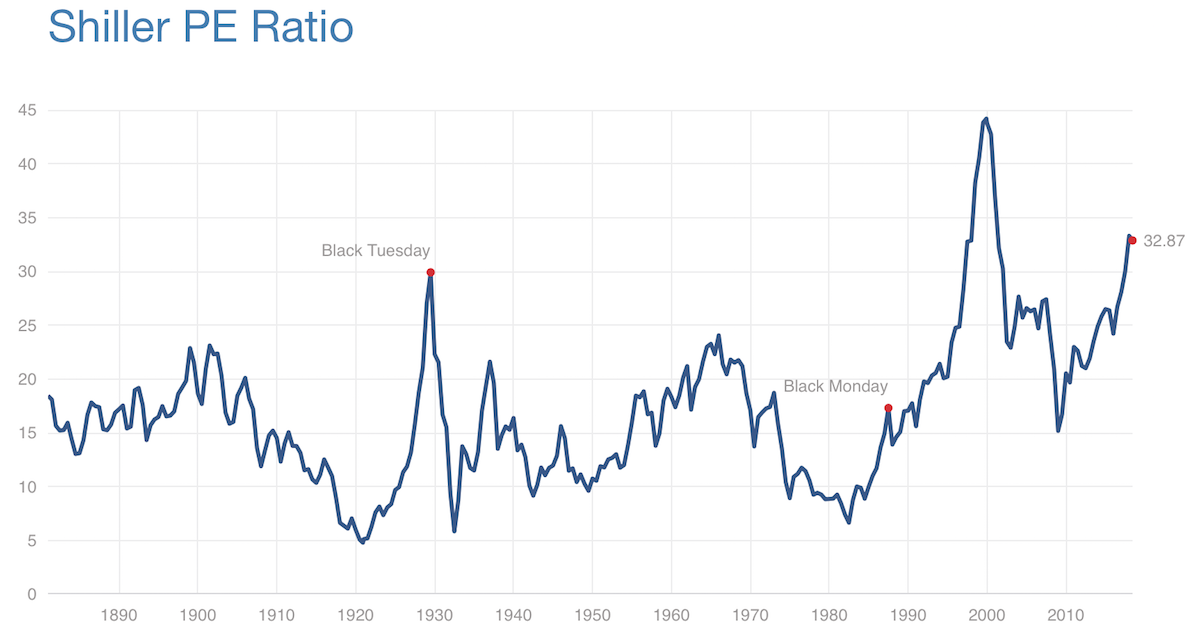 This price-to-earnings ratio is based on average inflation-adjusted earnings from the previous 10 years, known as the Cyclically Adjusted PE Ratio (CAPE Ratio), Shiller PE Ratio, or PE 10.

There are a few well-known ways to the push the stock markets higher and inspire confidence in the masses of investors to jump back into the shark-infested water. Artificially low interest rates, debt monetization and other forms of stimulus have been used to prop up the markets over the past decade. In addition, corporate stock buybacks (share re-purchases) and the use of high levels of margin debt are other ways.

American companies announced a record $201.3 billion in stock buybacks and cash takeovers in May, on track for $2.5 trillion in 2018. This smashes previous records and helps corporations manufacture growth in earnings-per-share.

Margin debt is at record highs and the problem has grown to be systemic. The following chart shows the strong correlation between margin debt and stock valuations. This type of leverage helps to push valuations higher at an accelerated pace. 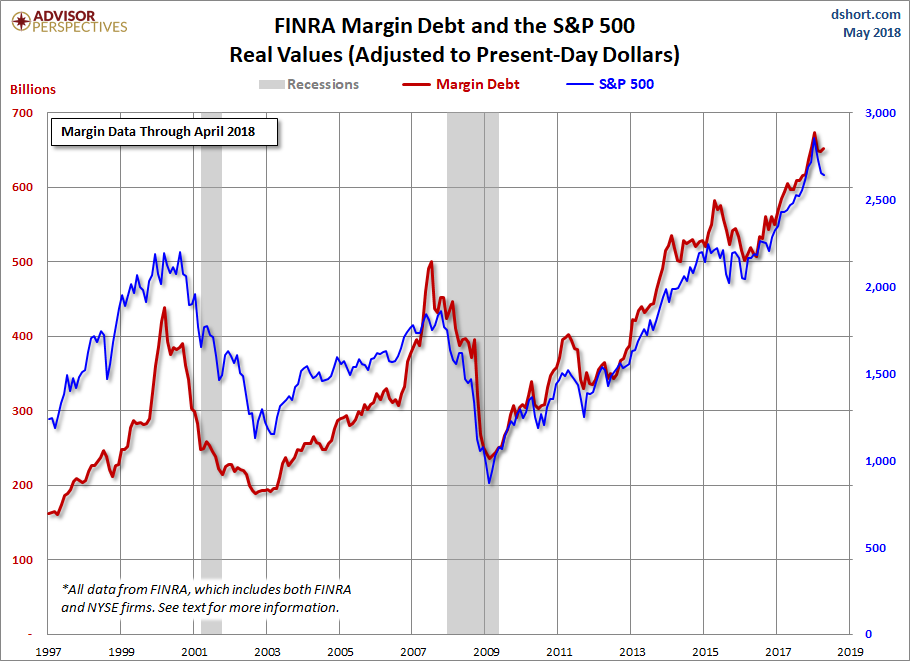 Of course, it cuts both ways. Any shock to the markets and panic selling will be exacerbated by this level of leverage. It wouldn’t take long to give back 50% of the post-crisis gains.

Despite all of these factors, I am not currently short the market. I try not to fight the prevailing trend and while there are significant cracks in the veneer,  the trend remains to the upside (for now). But I believe it is wise to deploy relatively tight stop-loss orders and make sure you have plenty of non-correlated assets in your portfolio.

If you think bonds are “risk free,” think again. The bond bull market is over and normalization has started. Former Federal Reserve Chariman Alan Greenspan told CNBC in March that the decadeslong bull market in bond prices is coming to an end.

Yields on the 30-year U.S. Treasury bond tumbled from around 15% in 1981 to just 3% today. This is the second-longest bond bull market of the modern financial era. Note that bond prices move inverseley to bond yields. As rates increase, yields will rise and the value of previously existing bonds will drop. If the FED raises rates too aggressively, we could see multiple bubbles bursting at the same time. 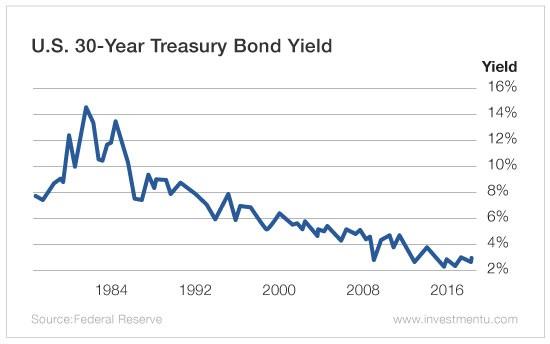 The recovery in real estate prices has truly been spectacular in the decade following the bursting of the housing bubble. Home values in many markets have bounces back to record highs. But I believe that home prices are at or near a top and are going to start declining over the next few years. Price appreciation has slowed considerably already and prices are starting to drop in some markets. Watch for an increase in mortgage defaults as households are back to spending too high a percentage of their incomes on housing.

On average in the United States, homes were 5x incomes during the housing bubble and dropped back to 3.5 after the crash. They have crept back up to 4.5 currently, the second least affordable they have ever been. Of course, this is a regional dynamic, with the current ratio around 10x in many areas of California.

The issue here is that real home prices are at or near all-time highs in most major cities. Yet, the median incomes for families are nowhere near keeping up. This does not mean that prices can’t continue to creep higher, but watch for prices to level off in the near term. This will be driven by higher interest rates making homes less affordable, minimal wage growth, and less beneficial tax treatment on mortgage interest.

I expect the overall price trajectory to continue higher in the long-term, with a growing population and limited areas of desirable building space. Priced in depreciating paper money, housing can be a good inflation hedge as well. But in the near term, it feels like housing bubble 2.o is at our doorsteps. 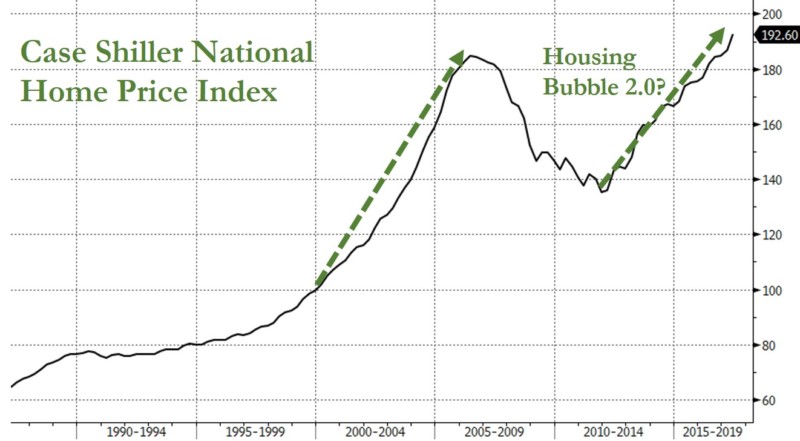 This doesn’t mean that investors should have zero exposure to these sectors. But I believe that the easy gains are behind us and it makes sense to rotate funds out of asset classes that are looking increasingly overvalued and into asset classes that remain vastly undervalued. Shifting your investment capital based on the timing of key market cycles can greatly increase your long-term gains.

In part 2 of this article, due out Monday, I will cover three investment sectors that I believe are undervalued and likely to outperform over the next 12 months. If you haven’t already subscribed to our email list, you can enter your information below in order to receive part 2 of this article and all of our future research.

We never rent, sell or share your email address and will not bombard you with promotional junk.