Investors in the cannabis space have thus far focused primarily on the growers of the product. We first recommended Canadian greenhouse growers in 2016, added in 2017 and added again in early 2018. It has been a very profitable ride and I believe there is more upside ahead for cannabis growers over the next 12 months.

But they will eventually face margin compression, as the supply shortfall turns into oversupply. This is due to the massive amount of money that has been injected to rapidly expand production capacity at multiple companies. As they maximize output in an attempt to achieve revenue growth, market share and first-mover advantage, they will inevitably overshoot and the oversupply will drive down prices. Lower prices will equate to lower profit margins for the growers, but this is probably 12 to 18 months out, so there is still room for valuations to continue higher before the margin compression occurs.

Another way to profit from this high-growth emerging sector is through retail exposure. A big advantage to retailers is that they will not face the same margin compression as the growers, when all of the new supply comes online. Their margins are likely to remain relatively high no matter what happens with supply and they stand to benefit from exploding demand in Canada, where cannabis becomes fully legal on October 17th.

To give you an idea of the potential for the retail side of the business, take a look at leading retailer, California-based Medmen (MMEN.CN or MMNFF). While it took a while for their share price to gain traction, it has rocketed 50% higher in the past week alone and is up 80% since their IPO in May. They currently operate 66 retail stores across 12 U.S. states.

Cannabis retail outlets can typically generate revenues in excess of $5 million per store, per year. Medmen are targeting $20 million in annual revenue per store. The stores have a gross margin of 60% and are so profitable that they have an average payback of under one year. Clearly, the retail side of the cannabis industry is a good place to invest. 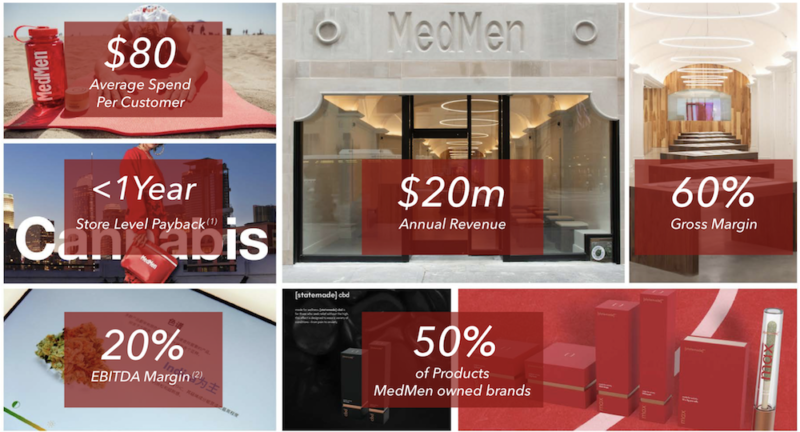 “Retail is the place to be because of the defensibility due to the zoning restrictions and the limited number of licenses,” Bierman said. “I think retail is the permanent moat opportunity for this industry and that’s where we’ll continue to be focused.” – MedMen CEO Adam Bierman

I personally am not invested in MedMen, due to the way they structured their IPO and excessive executive compensation. They aim to be the Apple store of the cannabis sector, which may appeal to some, but they are priced significantly higher than their competition. This brings me to what I believe could be a better near-term opportunity for investors looking to profit from the retail side of the cannabis industry.

Alcanna (CLIQ.TO or LQSIF) is a company that we have written about multiple times to subscribers due to its potential in the Canadian cannabis industry. They are transitioning from solely a liquor store chain to adding dozens of cannabis retail outlets in Canada. They changed their name from Liquor Stores N.A. Ltd. to Alcanna Inc. to better reflect the new strategic direction through the expansion of the company’s business into two divisions: alcohol and cannabis.

In 2017, Liquor Stores’ previous management went through a proxy fight with activist PointNorth Capital, which ended with PointNorth taking over the board and replaceing 6 of the 8 directors. PointNorth appointed new management with the view to explore opportunities in cannabis retail.

Alcanna currently has a market cap of CAD$390m and has a dividend yield of 3.6%. They are the largest liquor retailer in Canada and second largest in North America with over 230 retail stores. With revenues in excess of $600 million, Alcanna processes over 20 million individual retail transactions of beverage alcohol per year.

But Alcanna’s alcohol store margins are not particularly high. Despite $621 million in revenue in 2017, operating income was only $15 million and they reported a net loss of $30 million. These numbers have been improving in 2018, due to cost cutting, closing their weakest-performing stores, renovations, discount store launches, increased private label offerings, new management, improved branding and a number of other initiatives.

Aurora Cannabis (ACB.TO or ACBFF) invested in Alcanna earlier in the year, acquiring 25% ownership for $138 million in cash. Aurora paid CAD $15 per share, a premium of 50% to the current share price of $10 per share. They have an option to increase ownership to 40% and I believe they will eventually acquire all shares of Alcanna at a significant premium as retail sales and margins move significantly higher.

The vertical integration makes sense for Aurora and both Aurora and Alcanna are based in Alberta. Aurora’s flagship Aurora Sky production facility is located next to the Edmonton International Airport in Alberta. It is clear that Aurora is doubling down on Alberta and wants the home court advantage to expand from production into the retail side of the business.

Alcanna has been given exclusive rights to open retail cannabis stores under the brand name “Aurora” across Canada. Alcanna’s position as the biggest private sector liquor retailer in Canada, aligns with Aurora’s position as one of the world’s leading cannabis companies.

Alcanna’s CEO James Burns said they will be opening the doors to five or more new cannabis stores on the day of legalization, October 17th. All 37 stores are planned to be up and running in Alberta during the first quarter of 2019. Here are some renderings of what the new stores will look like. 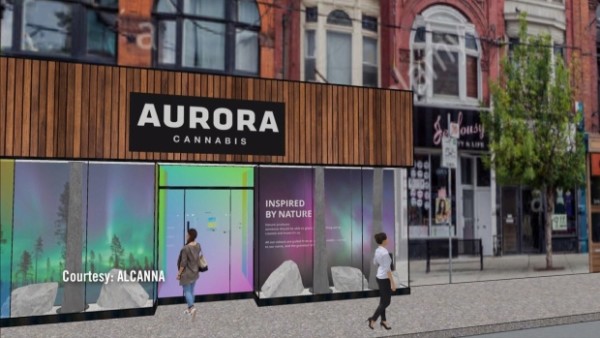 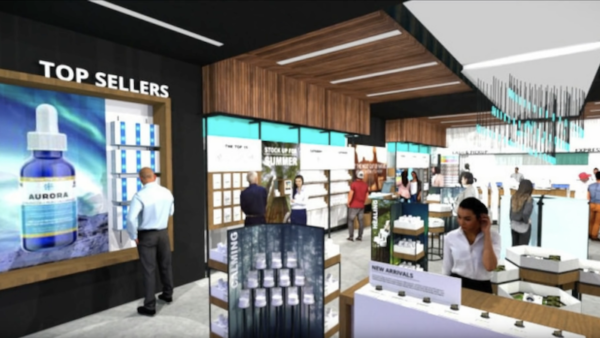 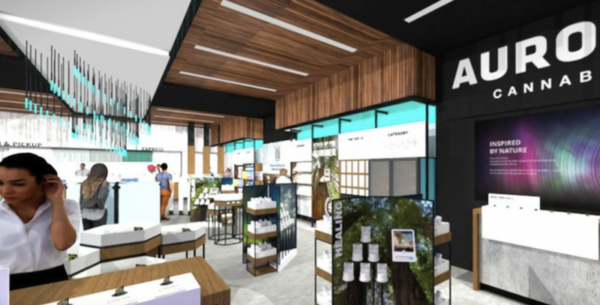 Alcanna finally received some attention from the markets in early October, when the share price spiked 15% higher on 5x normal daily volume. The main reason for the share price increase was that the company was mentioned during the FY2018 earnings call of partner Aurora Cannabis. Aurora is a much larger company ($12B market cap) with much greater coverage than Alcanna, so I suspect the fact that they mentioned Alcanna during the call drove investor interest and buying.

Alcanna was mentioned around 8 minutes and again around the 25-minute mark in the Oct 9 Aurora conference call.

There are others competing in the retail cannabis space in Canada, but Alcanna has a major leg up on the competition. They already have the stores, the operational experience, relationships with landlords and governments and the fundamentals of retail. They have been selling controlled substances in multiple provinces and had their boots on the ground days after the election in order to secure new locations for their cannabis stores. Their profit margins will rise considerably as they open new cannabis stores and convert some of their current liquor stores to cannabis retail outlets.

Key to our investment theses is the vote of confidence from Aurora Cannabis, which bought 25% of the company and lent their branding to the stores. They have an option to buy up to 40%, but I believe they will eventually buy the entire company at a premium to market prices. At today’s prices, we are able to buy shares 50% below the price when Aurora invested. Of course, we don’t get the warrants, but the price looks attractive nonetheless.

The stock has not participated much in the cannabis sector rally over the past few months, but we believe the upside potential is significant. Cannabis sales in Canada are estimated at $5 billion this year and will double to around $10 billion over the next 3 to 4 years. This is a massive market opportunity and incredible future growth potential. Alcanna is likely to gain significant retail market share, but even if they only capture a small percentage of the retail business, the upside potential is enormous. I expect to see Alcanna report rapidly growing revenue and significantly improved profit margins in the back half of 2019 and into the future.

The chart shows a higher low this July versus the low from August of last year. There is also a nice uptrend over the past few months with higher highs and higher lows. After a brief spike to $11.50 in late September, the share price has dipped again to support at the trend line. The RSI is near oversold and has plenty of room to run higher. For these technical reasons and the fundamental bull case covered above, I believe this dip represents a buying opportunity in Alcanna. 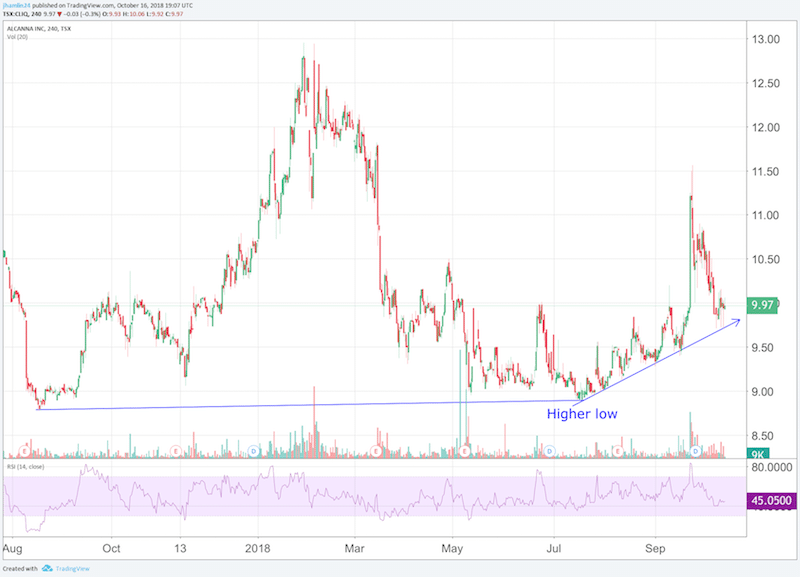 Disclaimer: I own shares of Alcanna in my personal portfolio and have added the stock to the GSB model portfolio.

We also have our sights on another emerging retailer in the cannabis space. Like Alcanna, we think this company will have a significant advantage over the competition due to their history and speed to market. They have secured 30 store locations and are in various stages of the application process with the local municipalities. Sign up for the premium membership to receive this pick and all of our top picks across the cannabis sector, precious metals, cryptocurrencies and more. New subscribers can take 25% OFF any subscription level by using the discount code GREEN25. The discount is good until the end of day on October 17th.