Bitcoin has enjoyed a massive breakout during 2017, up over 500% year to date from $960 to the current price of $5,750. It briefly hit an all-time high near $6,200 last week, but has since corrected nearly 10%. The main driver of the price advance was the Bitcoin Gold fork, as investors were looking to increase their exposure to Bitcoin prior to the snapshot in order to get free Bitcoin Gold. Once the fork date passed, the correction ensued, with the price dropping toward $5,400, before bouncing and correcting again in volatile trade.

Can the Bitcoin Price Continue Higher?

There are a few reasons to believe that it might. First off, another fork is coming up around November 16th, when Bitcoin Segwit2X will split from Bitcoin Core to become it’s own token. Segwit2X will double the block size and proponents claim it will help reduce costs and speed up confirmation times. Opponents say it is unnecessary as the implementation of the Lightning Network will accomplish the same without needing another contentious and potentially dangerous hard fork.

If this sounds familiar, it is exactly what happened with Bitcoin Cash and Bitcoin Gold. In both cases, the price of Bitcoin ran up considerably in anticipation of the forks. If history repeats, we can expect another rally in the price of Bitcoin leading up to the November 16th Segwit2x fork.

For the record, I think Bitcoin Cash is terrible and B2X is potentially even worse. I view Bitcoin Gold as a shit coin and this opinion is shared by the market, as the price has quickly dropped from $500 to $120. Developers are cashing in for little work or real improvement to the network. These forks are mostly money grabs and only serve to confuse Bitcoin adopters, while dividing and distracting the community. When I receive “free” tokens from these forks, I typically sell them within the first week.

But everyone loves a free lunch or in this case, free coins. Those holding Bitcoin prior to the fork on November 16th will receive an equal number of Bitcoin Segwit2x (B2X). I expect the value will probably end up somewhere between Bitcoin Cash and Bitcoin Gold. Thus, we might also expect the impact on the price of Bitcoin leading up to the fork to be within similar scope to what occurred with these past forks.

The Bitcoin Cash fork occurred on July 24th and the price of Bitcoin rallied 52% in the week prior to the fork. It was also bounced back after the China ban FUD, so we can’t assume the entire rally was due to the fork. But it was certainly the main driver of the sharp advance.

The Bitcoin Gold fork occurred on October 24th and the price of Bitcoin rallied roughly 21% in the two weeks prior to the fork.  I don’t think it makes sense to give Bitcoin Gold any credit for the price bounce any further back. The bounce off the $3,000 level came after JPMorgan CEO Jamie Dimon called Bitcoin and fraud and the proceeded to buy the dip aggressively, either for JPM or their clients. At any rate, Bitcoin was bouncing from a variety of factors until the Bitcoin Gold fork was in the headlines. 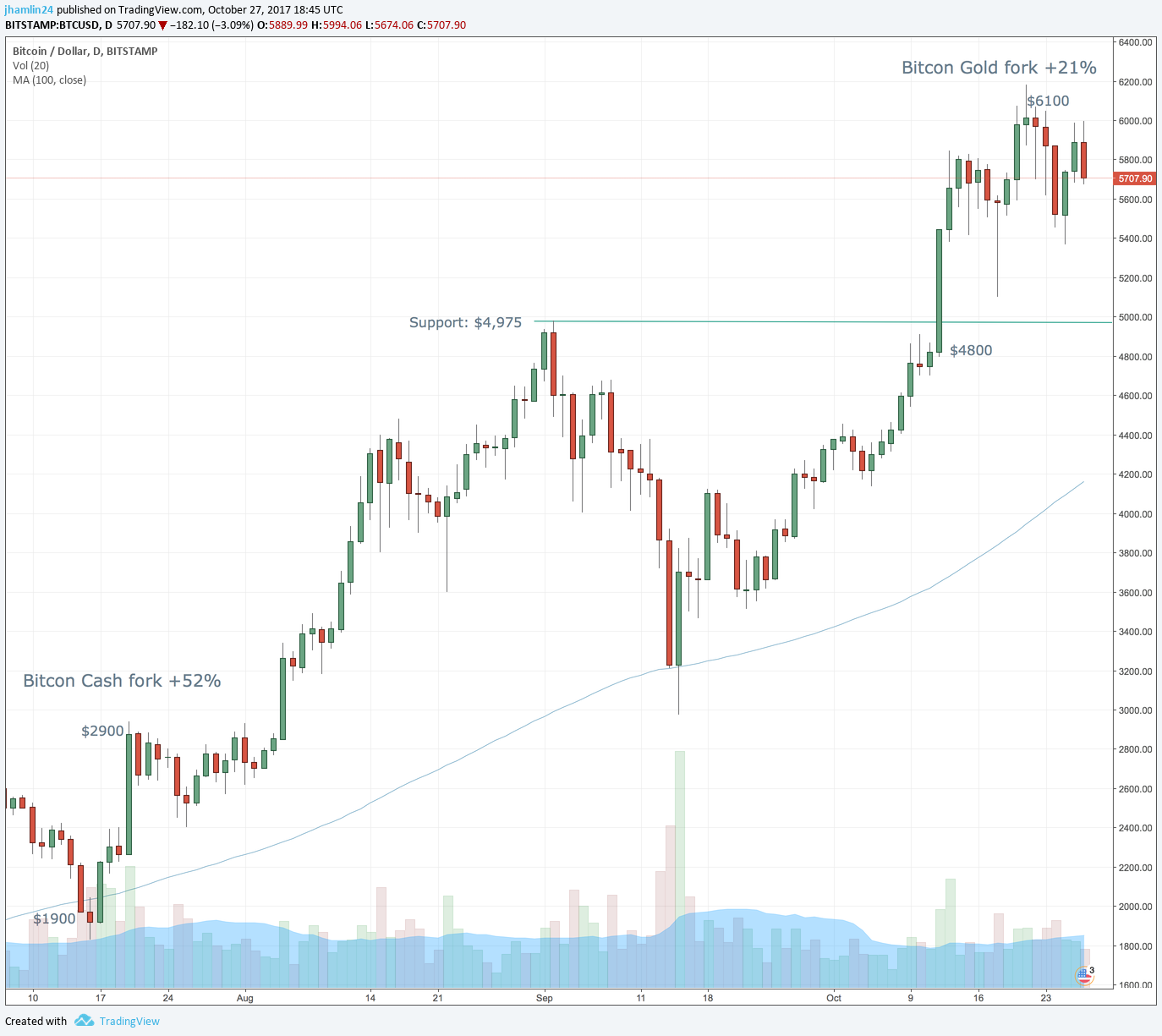 If we assume that the Bitcoin Segwit2X fork will generate a rally in magnitude somewhere between these two prior rallies, we can use 37% as the half-way mark. A rally of 37% from the current price of $5,750 would give us a Bitcoin price of $7,850 by November 16th.

Of course, there is no guarantee that the price will rally as it did in the past. Negative news could slam the price lower in the near term and the B2X fork may already be priced in to some extent. Regardless, our long-term view is for a much higher price, as there is a limited supply and growing demand from new investors entering the cryptocurrency space for the first time.

Bitcoin is nothing like Tulip Mania and those buying into this riduclous line continue to miss out on profits from one of the best performing assets ever. Here are 5 reasons why Bitcoin is not a bubble, which came from an unusual source in Nasdaq.com:

1. The Growing Acceptance of Bitcoin as Legal Tender

One of Bitcoin’s biggest challenges so far has been acceptance by lawmakers and financial regulators due to its decentralized nature and its unfortunate association with criminal activities carried out on the dark web. However, Bitcoin’s “official” acceptance is on the rise.

In April 2017, Japan announced that it would officially begin accepting Bitcoin as a legal payment method, which immediately boosted the price of bitcoin and has led to a substantial increase in merchant adoption across Japan.

In the Philippines, citizens have been increasingly using Bitcoin to send and receive low-cost remittances. This has not gone unnoticed by the country’s central bank, which announced in February 2017 that it will regulate Bitcoin so that the digital currency can be used as an officially accepted remittance system and, thereby, granting it full legal status.

Countries such as Australia and Russia have recently made similar statements that could lead to Bitcoin becoming a fully accepted medium of exchange in their respective countries. This is a trend that is likely to continue, given the growing demand for Bitcoin as an investment as well as an online payment system.

In the early years of Bitcoin, merchant adoption was limited to a few brave ecommerce stores, usually run by early-stage Bitcoin enthusiasts. This, however, has changed substantially as leading tech companies and ecommerce platforms have chosen to accept Bitcoin as a payment method. Microsoft, Rakuten and Overstock are three of the largest companies to accept Bitcoin payments.

With bitcoin’s sharp price rally, increased media coverage and newfound acceptance in places such as Japan, Bitcoin merchant adoption is on the rise and this trend will likely continue.

The arguments for online merchants to accept Bitcoin are actually very strong; fees are lower than for credit card payments, chargeback fraud is entirely eliminated, new customers can be reached in underbanked regions and a new, tech-savvy consumer base can be attracted.

The more that merchant adoption increases globally, the more there will be regular and stable demand for the digital currency. And given the current low rate of merchant adoption, there is a substantial room for upside.

3. Bitcoin Is Increasingly Acting as a Store of Wealth in Distressed Economies

Another reason why Bitcoin is most likely not a bubble is that is has a much-need real world application in economically distressed countries. In places such as Venezuela, Bolivia and Zimbabwe, for example, bitcoin has been acting as a store of wealth and as an alternative spending currency as local currencies are weakening into worthlessness. This can be witnessed by increasing bitcoin trading volumes that are negatively correlated with the performance of local currencies and economic growth in distressed regions.

Bitcoin also allows individuals and businesses in countries with strict capital controls, such as Venezuela, to receive much-needed remittances to stay financially afloat. In other words, wherever there is economic distress, Bitcoin demand will likely rise and Bitcoin adoption will grow.

4. Bitcoin Has Only Just Gone Mainstream

You could say that 2017 has been the year in which Bitcoin has finally gone mainstream. Five years ago, if you would have asked the average person on the street what Bitcoin is, they would have most likely given you a bewildered look. Today, most people have at least heard of Bitcoin and many even know that one bitcoin is worth more than an ounce of gold.

Now that Bitcoin has become mainstream, the buying potential from new investors is immense, especially as institutional investors have started to open up to the idea of investing in bitcoin and other digital currencies.

Finally, one of the key reason why Bitcoin has become so valuable is that its increasing demand is met with a fixed limited supply.

Because of the way Bitcoin was created, only 21 million coins can ever be mined. Furthermore, the rate at which new coins are created slows down over time, which means the increasing demand for the digital currency is not only met with a limited total supply but also with a continuously slowing supply.

The discussion of whether Bitcoin is a bubble or not will likely continue indefinitely, but the comparison between Bitcoin and early internet stocks does not hold true due to the fundamental differences between the two asset classes.

How to Maximize Profits in the Cryptocurrency Sector

We remain long Bitcoin and a handful of quality altcoins that we believe will outperform Bitcoin over the next 12 to 24 months. In addition to holding Bitcoin and altcoins in our portfolio, we also invest in initial coin offerings (ICOs), also referred to as crowdsales or token sales. We have created an ICO tracker for our subscribers that rates ICOs on multiple criteria and assigns an overall score for the future potential. These are the ICO’s that we believe will provide the best investor returns, with potential “home run” investments from investing early during pre-sale periods.

Below is a screenshot to give you an idea of what is included in our tracker. A few of our top picks have been redacted out of respect to paying subscribers, but it will give you a good idea of what is provided. 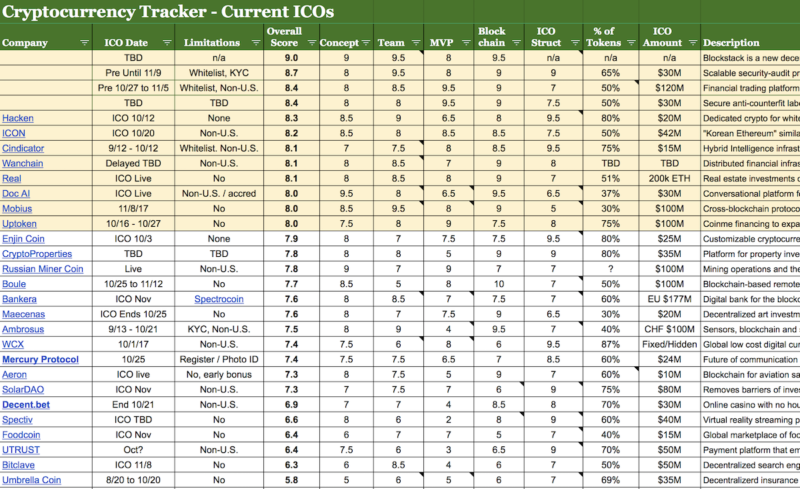 Our subscribers have been generating significant profits in cryptocurrencies this year. We were early investors in this space and first covered Bitcoin around $100. You can receive all of our top cryptocurrency picks, detailed research and analysis, crypto watch list and the ICO tracker mentioned above by clicking here.

In addition to cryptocurrencies, we also cover precious metals, cannabis stocks and select sectors (such as lithium) where we believe there exists a favorable risk/reward tradeoff for investors. Get started today for just $99 by clicking the button below!