Commercial Traders Continue To Pare Back Short Positions in Gold

The price of gold has begun 2017 on more solid footing, posting a 1.9% gain in the first trading week of the new year. The bears came out of the woodwork this weekend to warn us that last week’s move was simply an oversold bounce. They cheered on the slight pullback in gold prices Friday, and all of them are in consensus that $1,200/oz will be a brick wall of resistance. While the trend is still in the bears’ favor, they seem to be ignoring the COT data.

The COT (Committment of Traders) data is one of my favorite indicators I use when trading commodities, and I am the most interested in the positioning of the Commercials. The Commercials are the largest powers in the marketplace, and are the users and producers of the commodity. They do not use the markets to speculate, but instead use it to sell forward/hedge their production or demand. The ability to study the Commercials movements is a huge asset, as their footprints are like those of elephants. When the commercials are at heavy net short levels you want to be cautious with your long positions. Conversely, when the commercials are heavily net long, you want to have a tight leash on short positions, and begin position yourself to the long side.

Unfortunately, it is very rare to see extreme positioning in the COT report. Opportunities only arise once every few years, and net long positions in the gold price are even more rare. The last time the Commercials were net long gold was late 2001, so waiting for them to get net long has been a useless application of the indicator. You may be asking, if the Commercials have been net short the past 15 years, how do I know when to get long gold? There is no perfect answer, but I believe the best risk/reward opportunity is when the Commercials’ positioning is near parity.

As we can see from the above 20 year chart of COT data, the last time the Commercials were net long was November of 2001. This marked the bottom for gold, and came shortly after the Commercials moved to their largest net long position in gold in 15 years, at the January 2001 lows. This proved to be an excellent time to buy gold, as the metal bottomed the same month that they moved to their largest net long position. I have shown the Commercials positioning in the below chart, with a monthly chart of gold between 1995-2005. The Commercials moved to net long at an average price of $265/oz on gold, which was within 5% of catching the exact lows in the gold price for that decade. The gold price tripled over the next 6 years, and the Commercials’ timing proved to be very impressive. 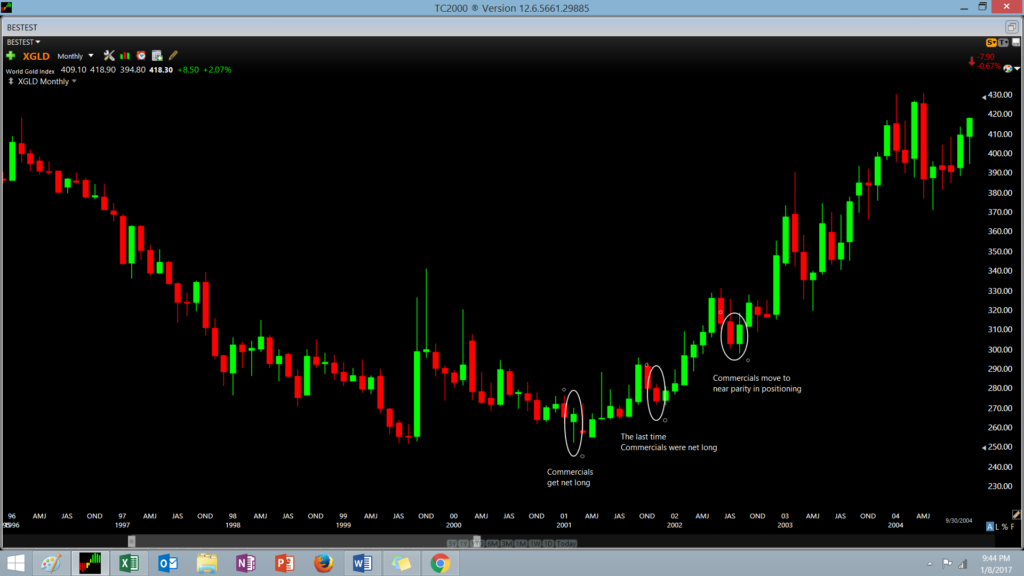 Taking a look at a 5 year chart of COT data, we can see that the Commercials have only moved from heavily net short to near parity on 5 occasions. These occasions in chronological order are as follows:

These buys are shown with circles in the above COT data chart, and investors would have done very well following these signals. Within 3 months of every occurrence, the price of gold gained at least 7%. To give a look at what these signals looked like on a chart of gold, I have included the below chart. 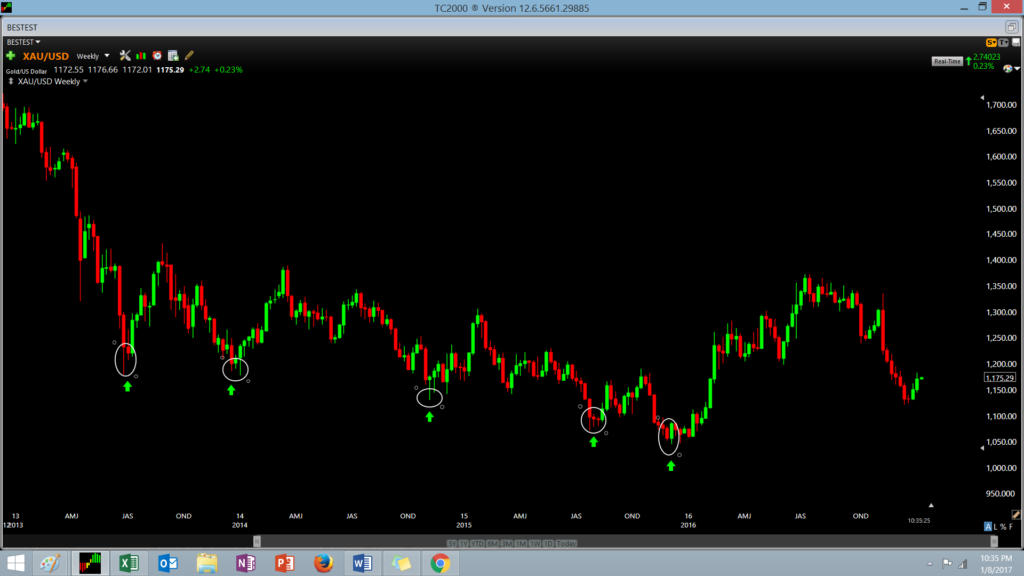 So how does this relate to the current market? Are Commercials nearing parity in their positioning? 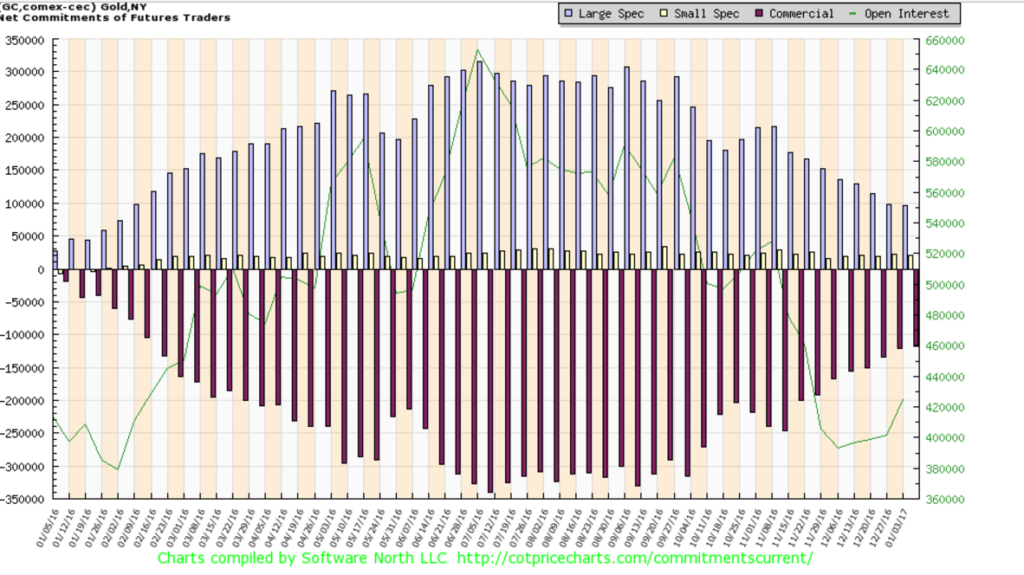 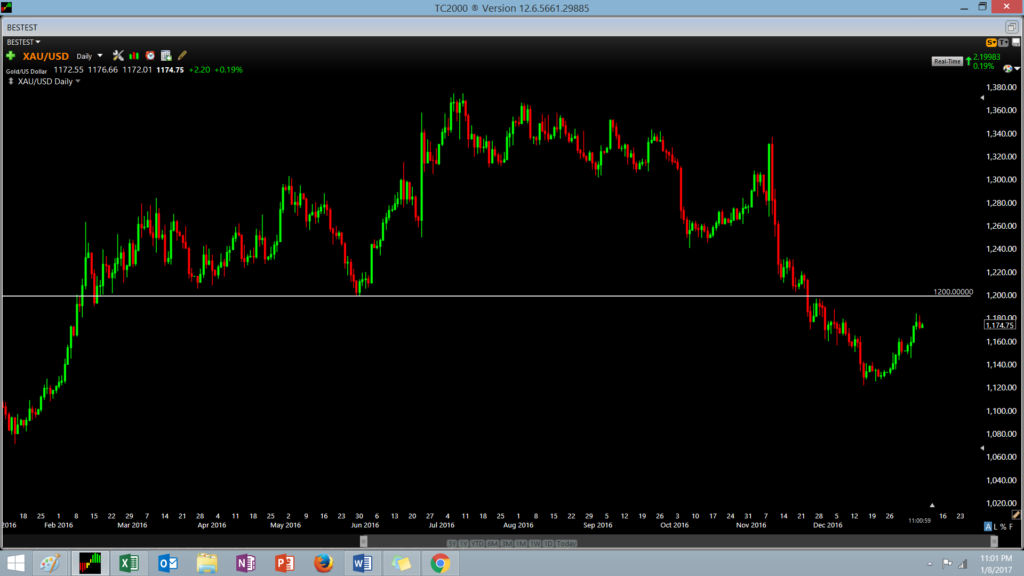 So what’s next for the gold price?

The gold chart is looking quite constructive as it makes higher highs and lower lows over the past 4 weeks. While this is a good start to putting in a bottom on the shiny metal, we need to see gold break out and hold above $1,200/oz. The $1,200/oz level is very important for both the bulls and bears, as this was support for the majority of 2016.

In addition to this, gold needs to find a way to get back above its 200-day moving average. The 200-day moving average for gold sits at $1,270/0z, and tends to be a line in the sand for bull and bear markets. Until the bulls can close the commodity above these two levels, the bears have the trend in their favor.

Having said that, despite the bears having momentum in their favor still, they are fighting the Commercials. This is not a fight that anyone wants to be in, as the Commercials have a great track record and certainly pack a punch. The next couple weeks should give us better clarity on whether this move from $1,120/oz was simply a dead-cat bounce, or the beginning of a new bull market for gold. As long as the bulls can defend $1,120/oz, I am quite confident the lows are in. This week’s COT report will be important as it will tell us what the Commercials did in terms of positioning when faced with a gold price above $1,180/oz.

Our top-rated newsletter gained 69.8% in 2016 and is up over 10% already in 2017. Get access to the newsletter, our model portfolio, trade alerts and more by signing up here.

About the Author: Taylor Dart

Taylor has over 10 years of experience in active investing with a compound annual growth rate of 19 percent per year. His main focus is on undervalued growth stocks outperforming the market and their peers. In addition he use extensive technical analysis to capture maximum upside price action, as his belief is that timing is everything. Taylor scans upwards of 1200 stocks nightly on the U.S. and Canadian markets to identify the best fundamental opportunities with the most timely technical setups. He is a huge proponent of trend following.