This action is being driven primarily by a robust US dollar index, which is flirting with the 100 level for the first time since 2003. Take a look at the exponential move higher in the USD. 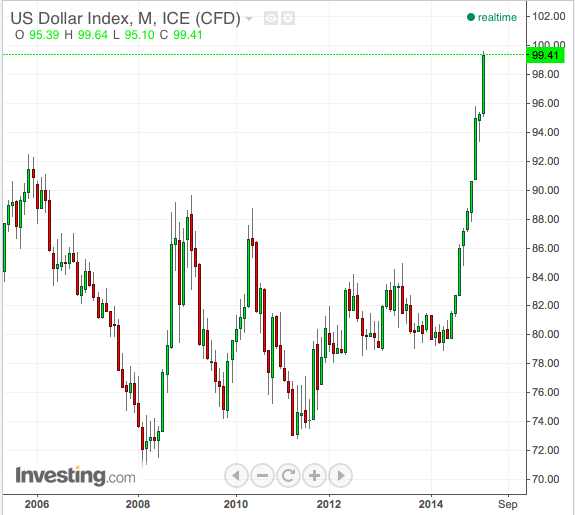 This type of move is largely unprecedented, with the only other time in recent history occurring during the 2008 financial crisis. That spike was caused by a scramble for cash and liquidity, but the current spike is happening absent any major crisis. Sure, the ECB is easing and the U.S. stock market is outperforming many others around the globe, but I believe there is something greater behind the move. Could it be the market foreshadowing a coming crisis?

So, what is next for gold? It is time buy or do we risk catching the proverbial falling knife?

I believe we could see gold test the 2014 low of $1,130 this month, as the USD makes a run at the 100 level. Some are forecasting that gold could drop to support around $1,000 in the next few months, as we enter the low seasonal period for gold. I think this outcome is unlikely, especially given the price action today.

As I am writing this piece, gold stocks are staging a comeback rally and diverging from gold. In fact, the GDX is currently up 2.5%, despite both gold being down $10 or nearly 1%. This is very bullish in the short term, as mining equities tend to lead the metals higher and divergences like this typically signal a trend reversal.

I still expect a major rally by the end of 2015 and I don’t believe gold investors should get too discouraged by the current correction. It has been disappointing to give back all of the recent gains, but we must maintain a long-term vision.

The gold bull market of the 1970’s corrected by roughly 45% over a 2-year period before it reached mania levels with a 709% increase from the low! The current gold bull market has been correcting for about 3 1/2 years to date but has only corrected roughly 41% from its high.

This bull is unwinding at a slower and more moderate pace than the 70’s one and the correction, so far, hasn’t been as quite as severe as the 70’s. I remain convinced that the gold bull market is not yet over and the mania phase with the greatest profit potential is still ahead.

A multiple of 6X from the current price would put gold around $7,000 before this bull market is over. With projected leverage of 2X-3X from best-in-breed mining stocks, the potential exists to see your investments go up by a factor of 10 to 20 times!

Of course, this assumes a repeat of 1980 and you will have to sell near the top, but it helps to give some perspective of the potential gains that could be ahead.

Another bullish factor for gold is that the current price is below the cost of production for many mining companies. Just yesterday, Allied Nevada filed for Chapter 11 bankruptcy, and there is no doubt that others will soon follow. Their profit margins have been wiped out, they have no cash flow and the capital markets are not willing to risk throwing a lifeline.

The pricing mechanisms of the gold market are clearly out of whack when you can purchase the finalized product for less than it costs to dig it out of the ground, transport and refine it. This situation cannot last. As more miners shut down their operation or go out of business, supplies with decline rapidly. With constrained supply and a continuation of robust demand from central banks worldwide, it is not difficult to predict which way the gold price will be heading. It may not happen next week, next month or even during this year, but higher prices for precious metals are on the horizon.

In this context, we view the current correction as an excellent buying opportunity. Yet, the majority of investors will do what the majority has always done throughout history – sell low and then attempt to buy back at higher prices during a rally. Those with the wherewithal to do the opposite, diverge from the herd and buy the dip, are likely to be richly rewarded.

This does not mean that we advocate going ‘all in’ at this moment. The more prudent course of action is to buy in tranches at regular intervals during the corrective phases. This is what we are currently doing for Gold Stock Bull Premium Members, as we finally begin to put our large cash position in the portfolio to work. Click here to join us!