FBI Director James Comey said Friday the bureau is reviewing new emails related to Hillary Clinton’s time as secretary of state, according to a letter sent to eight congressional committee chairmen, a surprise development with 11 days until the election.

The surprising news jolts a presidential race that had largely settled as Republican presidential nominee struggled in national and key battleground polls. Now, Clinton will be placed back on the defensive and forced to confront yet again questions about her trustworthiness.

Jason Chaffetz tweeted that the FBI’s probe into Hillary Clinton emails has been reopened: saying that “The FBI has learned of the existence of emails that appear to be pertinent to the investigation.”

“Now that the FBI has reopened the matter, it must conduct the investigation with impartiality and thoroughness,” he said in a statement. “The American people deserve no less and no one should be above the law.”

Almost 15,000 new Clinton emails were discovered in September, but it’s unclear if the announced investigation relates to them or other correspondence. The newly discovered emails are not related to Wikileaks or the Clinton Foundation, law enforcement sources told CNN’s Evan Perez.

Trump has said this shows the system may not be rigged after all and he is hopeful “justice will finally be done.” I wouldn’t hold your breath Donald. He added that the FBI probe is “bigger than watergate.”

As CNBC adds, Donald Trump seized on the news Friday that the FBI is probing new emails related to Hillary Clinton’s private server, contending that she threatens United States security and cannot be trusted in the White House. “I have great respect for the fact that the FBI and Department of Justice are now willing to have the courage to right the horrible mistake that they made,” Trump said at a rally in New Hampshire. “This was a grave miscarriage of justice that the American people fully understood and is about to be corrected.”

“In connection with an unrelated case, the FBI has learned of the existence of email that appear to be pertinent” to Clinton’s investigation, Comey wrote to the chairs of several relevant congressional committees, adding that he was briefed about the messages on Thursday. “I agree that the FBI should take appropriate investigative steps designed to allow investigators to review these emails to determine whether they contain classified information, as well as to assess their importance to our investigation.”

The FBI director cautioned, however, that the bureau has yet to assess the importance of the material, and that he doesn’t know how long that will take. Some believe Comey may be trying to save himself from a jail cell should Trump win. Websites that place odds on which candidate will win the election have shown Clinton’s odds drop and Trump’s odds spike following the news. Trump is still considered a long-shot to win the Presidency, but this news has certainly increased his chances.

Clinton held a press conference to address the news:

She seems to be above the law, with insider connections that few can rival. I realize it is not likely, but it sure would be nice to see justice served, for Clinton and the rest of the corrupt politicians on Capitol Hill. The system needs a reset, not that I necessarily believe Trump would be the one to do it.

Adding to recent revelations of Clinton’s corrupt activities 2006,  audio has emerged of Hillary Clinton proposing rigging Palestinian Elections. When you throw in the Clinton Foundation pay-for-play, one would think this might be enough to convict her.

The news that the FBI is re-opening the investigation caused stocks to erase all gains on the day, crashing from a gain of 0.5% to a loss of 0.5%. As for now, this news appears to be overshadowing the higher-than-expected Q3 GDP growth of 2.9%. 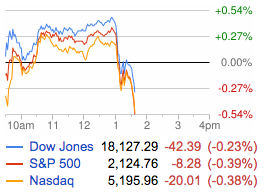 The news also caused the USD to drop sharply and both gold and silver to spike higher.

Mining stocks are also spiking higher this morning, reversing a morning decline into a 2% gain so far. After nearly 3 months of correction and consolidation, this could be the spark that starts the next bull cycle advance for mining stocks.

Several of the junior mining stocks that we track are now up more than 5% on the day. I will be watching for volume and follow through momentum to determine if we should add new positions to the Gold Stock Bull portfolio today or early next week. Sign up here to view our top stock gold and silver picks, plus get the monthly newsletter and receive trade alerts.