Over the past few months, mining stocks have returned to offering excellent leverage to the advance in prices for precious metals. Yet, during the recent pullback, the downside leverage has been absent. This is atypical behavior as mining stocks usually lead the metals and generate leveraged gains (or losses). This could be a bullish development, suggesting that investors in mining stocks believe they have the seen the bottom and are unwilling to sell despite the recent dip in gold prices.

Precious metals had a powerful start to the year, with gold climbing over $100 and silver rocketing roughly $3 higher during the first three weeks of January.  But the rally has since faded with both metals giving back nearly all of their 2015 gains.

Mining stocks typically offer leverage to the movement in the gold or silver price. From the start of 2002 until the end of 2007, gold went up roughly 203%. During the same time period, the HUI index of mining stocks rocketed 547% higher.  That is leverage of roughly 2.7 times. You will notice that the leverage cuts both ways, as gold dropped 41% from the high mark on 9/06/11 until the 11/06/14 low, while mining stocks (HUI) fell by 77%. The leverage to the downside was 1.8x. 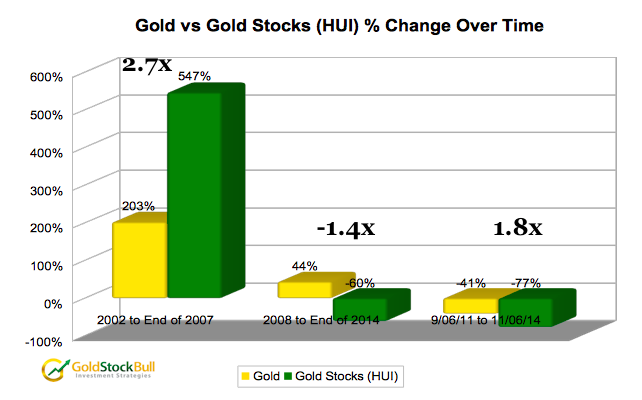 Anomalies pop up such as the period from 2008 to the end of last year. During this time period mining stocks were down 60%, despite gold being up 44%. So the positive correlation and leveraged gains are not consistent, which I will discuss more later in this article.

During the latest rally from mid-December 2014 to mid-January 2015, the leveraged gains that investors grew accustomed to during the early phases of the gold bull market returned. Gold advanced by 12% from the mid-December low to the mid-January peak. During the same time period, gold stocks advanced by a massive 37%, generating leverage of 3.1 times the advance in the gold price! 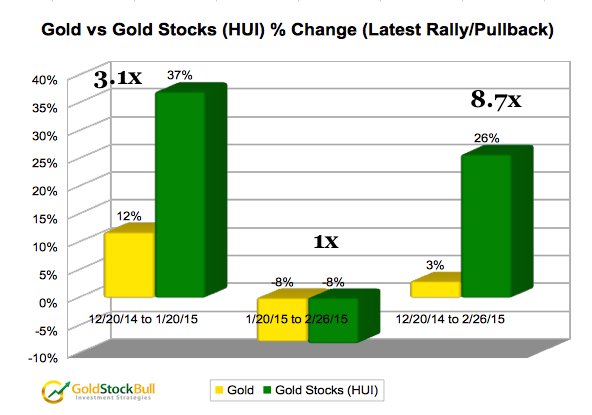 The really interesting aspect of the latest advance and pullback is that gold stocks have not registered a leveraged decline this time around. From the peak on 1/20/15 to 2/26/15, gold stocks declined by the exact same amount as gold, -8%. Investors were able to capture 3.1x leverage to the upside, without being penalized by that same leverage to the downside. This has resulted in a total gain of 26% for gold stocks since the 12/2o/14 low, despite the fact that gold is only up 3%. The leverage is an astounding 8.7 times over the last two months!

The miners are not following the metals lower and this is a significant development, as mining stocks typically lead the metals (either higher or lower). This is driven partly by lower energy costs improving mining margins. But it also seems that investors are not convinced that the pullback in gold and silver will last and continue to view mining stocks as undervalued. This could indicate that we are about to see a bounce in precious metals in the near term and that edging into new positions could be warranted.

While we advocate holding physical metals in your possession first and foremost, the leverage mentioned above is why we believe that mining stocks will offer better returns going forwards.

While the leverage cuts both ways, it has not been as severe to the downside as of late. From the top in September of 2011 until the low during November of 2014, gold dropped by 44% and gold stocks (HUI) fell by 77%. The decline in gold stocks was 1.8 times as severe as the drop in the gold price.

However, mining stocks don’t always offer such leverage. During periods when costs are climbing rapidly, particularly energy, labor, and borrowing costs, the leverage declines. When investors lose their risk tolerance or trust in the markets, they will favor metals over mining stocks. This occurred around the time of the 2008 financial crisis and ensuring years, when investors favored the metals over the miners.

So then, how can we determine if we entering a period when mining stocks are going to outperform gold? When will mining stocks generate positive leverage to the advance in the gold price?

The HUI/Gold ratio can lend insight. When the ratio is below the gold line, I expect gold stocks to outperform the metals (to the upside or downside). When the ratio is above the gold line, I expect gold stocks to underperform the metal and gold to outperform. At the current ratio of 0.16, gold stocks are near the most undervalued they have been since the start of the bull market back in 2001. There has been a nice bounce in the past few months, but the ratio still needs to double to reach equilibrium. The bottom line is that mining stocks remain oversold and undervalued relative to the metals that they produce and this suggests leveraged gains in the near future.

Like most indicators, the HUI/Gold ratio is not perfect. But it is one of the many tools that we use to determine the investment strategies outlined in the Gold Stock Bull Contrarian Report (50% off special for new members: $47 for a 3-month trial with coupon code TRY47).

Of course, not all mining companies are created equally and we always aim to outperform the HUI. When analyzing which mining stocks to buy, we look for companies that have high grade mines with low costs, a high growth profile, experienced management, low political risk, mining-friendly governments/tax incentives, blue-sky pipeline projects, the ability to secure financing at favorable terms, high insider ownership and projects that are attractive takeover targets for the majors.

You can perform all of this research yourself or let us do it for you at a minimal cost. Our current ‘50% off’ special allows new members to try out the service for three months at just $47, instead of the normal $95 quarterly rate. Best of all, you can try it out 100% risk-free for 30 days. If you aren’t 100% satisfied, we will give you a full refund. Click here to get started now!