Time to Short Housing and Financials

The gig is up. The Fed’s repeated intervention is having a diminishing effect and the media’s consistent denial is becoming less and less believable. The economy is in very bad shape and by any honest assessment already in recession. Understating inflation to produce the facade of economic growth only delays and exacerbates the inevitable. The dollar is toast and is showing no sign of stabilizing as Chinese officials continue talk of diversifying their reserves away from dollars. Investing in tangible assets such and gold and silver will protect your wealth, but even mining companies will likely be hit by a downturn in the economy, at least temporarily. So it is worthwhile to diversify your contrarian investment strategy and consider shorting the overall market.

I am not an expert on the housing and financial sectors. My focus and expertise is within precious metals and alternative energy. But it doesn’t take a genius to see the writing on the wall and so I decided to short both the housing and financial sectors via a relatively new and attractive investment option known as the ProShares UltraShorts. The two ETFs are SRS (UltraShort Real Estate) and SKF (UltraShort Financials). The “ultra” part of the ETF refers to funds attempt to track twice the inverse of the daily performance of various indices. If the Dow Jones Financials Index goes down 5% (like today), the UltraShort ETF goes up 10% and likewise with the Dow Jones Real Estate Index.

These new ETFs provide a better way to short the market because they don’t carry the unlimited risk or dividend costs inherent in shorting stocks or ETFs. They also don’t carry the added risk or time restraints of put options. Another advantage of the UltraShort ETFs is that they are not subject to IRA trading restrictions, which often forbid shorting.

These two funds were up 8% and 10% today alone, as I was able to capitalize on what I see at the beginning of turbulent times for the markets. “Turbulent” is putting is lightly, as one of America’s prized corporations and the largest car-maker in the world reported a third-quarter loss of $39 billion. Let’s write that out longhand to underscore the point: GM lost $39,000,000,000 in the last three months alone! 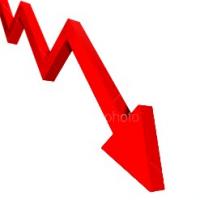 But why stop there? The country’s biggest mortgage finance companies and Washington Mutual Inc warned the housing downturn would extend well into next year. New York Attorney General Andrew Cuomo said his office was sending subpoenas to government sponsored mortgage finance companies Fannie Mae and Freddie Mac as part of a probe of the home loan industry. Their stocks tumbled 10% and 8.6%, respectively. Hello SKF. This seems like a no-brainer to me. Declining stocks outnumbered advancing ones by a ratio of about 10 to 1 on the NYSE and by about 4 to 1 on Nasdaq. Oil prices are flirting with $100 as war propagandists are employing scare tactics once again and urging the Bush administration to attack Iran. Has Iraq really taught us nothing?

Gold, silver and energy are rocketing to all-time highs, but you may want to consider diversifying your contrarian plays by taking positions in one or more UltraShorts. We expect the Real Estate and Financial sectors to be the hardest hit in the coming meltdown. It is our opinion that the troubles are just starting for these sectors and there will be at least another 6-12 months of significant downside.

Disclosure: Author owns shares of both SKF and SRS