On July 18th, a South Korean company claimed to have found the wreck of a Russian warship holding $130 billion in gold. Shinil Marine said it had discovered the wreck of the Dmitrii Donskoi, a Russian armored cruiser sunk in 1905 after fighting Japanese warships off South Korea’s Ulleung Island. It was reported that a staggering 200 tons of gold, worth $130 billion, was on board!

The ship, discovered 434 meters beneath the surface of the sea, was a 6,200-ton first-class armored cruiser from the Russian Baltic Fleet. It had left the Baltic Sea in 1885 and sailed the oceans until its doom in 1905 when the Battle of Tsushima began, wherein  38 Baltic ships including Dmitrii Donskoi, and 89 Japanese ship  went to war. The ship was sunk, leaving many searching for her for years.

So, it is unclear why a value of $130 billion was reported in the first place. One report claims the ship was carrying 200 tonnes of gold coins AND 5,500 boxes of gold bars. Maybe the gold bars make up the missing $122.16 billion in the calculation, but it seems unlikely. For reference, the image below is a pallet of around 10 tonnes of gold. The ship would need to be carrying 20 of these pallets to equate to the 200 tonnes or 325 of them to equate to $130 billion worth of gold.

If a newfound supply of $130 billion came into the market, it could soak up demand and force prices lower. Even the discovery of $8 billion would be meaningful in the short term, so I initially viewed the discovery as bearish for prices. The gold price shed $20 in a six-hour time period leading up to the public announcement of this gold discovery. Gold hit a new 2018 low around $1,211 per ounce the day after the news was released. Of course, correlation does not imply causation, but here is the chart for your amusement… 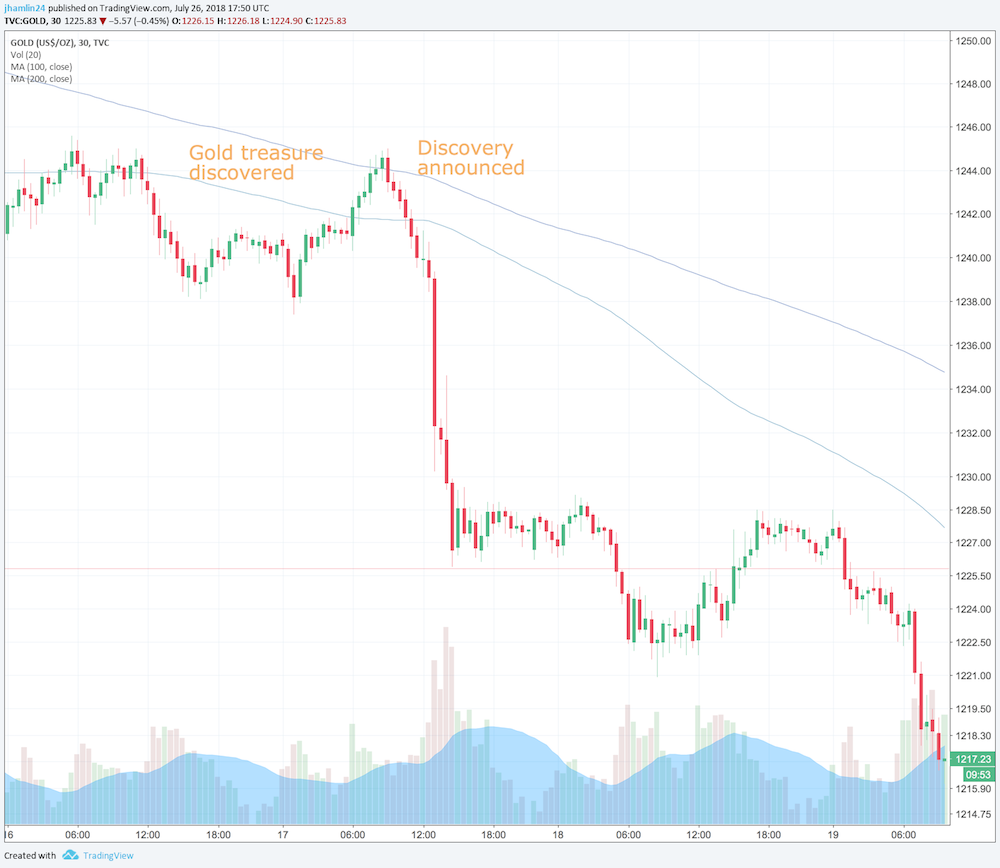 The story has taken an even stranger turn today. The company that made the discovery now says it has not verified the existence of any gold. From $130 billion worth of gold to nothing in a just over a week! Of course, there are theories that the discovery team is trying to retract earlier statement to avoid Russian claims on the gold, taxation or theft.

But a financial watchdog said it was probing possible unlawful stock trading. Shares of Jeil Steel, in which Shinil Group’s founder has acquired a large share, skyrocketed, only to fall by 20 per cent on Thursday and another 30 per cent on Friday.

“Concerning the treasure ship salvage project, investors’ discretion is recommended as there are risks of them suffering great losses if they rely on rumours,” the South Korean Financial Supervisory Service said in a statement.

“Spreading false informations or groundless rumours about the ‘treasure ship’ salvage can be subject to a criminal punishment,” it added.

The warning came with Shinil Group reportedly selling virtual coins to investors, promising huge returns after salvaging the wreck. Shinil is unlisted but its president recently agreed to acquire shares in a local company, Jeil Steel.

Further complicating the story is the fact that Russia had a land route to Vladivostok anyway. A vast railway network connected Russia from East to West. Trains would have been safer and more reliable. The war was far from the tracks.

Adding to the suspicion, the Dmitrii Donskoi had to carry 1600 tons of coal as fuel to take it from the Atlantic to the Pacific. And it had 500 crew operating its enormous engines and 12 heavy pieces of artillery. There simply was no space within the warship to carry that much gold, historians say. Some note it would be a physical impossibility for a ship of this size to carry over 3,000 metric tonnes in its holds. But then again, maybe that is why it sank.

As for the $133 billion of gold on the sunken ship, it is anyone’s guess if it exists. But if it does, then it would undoubtedly dwarf the recent discovery of $17 billion in booty off the coast of Cartagena, Colombia. Here is a video of the moment of discovery by the exploration team:

If the gold does not exist and this was fake news, then prices should bounce back to the extent that the news created a price drop. Either way, we believe that gold prices are offering excellent entry points for investors willing to buy while others panic sell. In particular, we believe that gold mining stocks are undervalued and overdue for a major bull cycle. We spend hours each day studying these companies to determine which are the most undervalued relative to their peers and which have the potential for the greatest returns over the next 12 to 24 months. Click here to get our top picks and all of our investment research instantly.

Or you can sign up FREE below to receive our news as soon as it is published: