How Will Trump, Clinton and This Contentious Election Season Impact Gold?

This election season is shaping up to be an extremely contentious one, with emotions running high, rigged primaries, pending lawsuits, threats of violence and deep-rooted hatred between supporters of Trump versus Clinton. The stock market looks like another massive bubble waiting to burst and any number of black swan events could be the needle that finally bursts the bubble and causes the phony recovery to come tumbling down.

In today’s article, we take a look at how the election season could impact your investments and which asset classes stand to benefit the most. We believe it is important to be positioned correctly well ahead of November and the chaos that could erupt following the Presidential election.

I. Rate Hikes in an Election Year? Fat Chance

One year chart from today. The date of the Fed Rate Hike of .25% (vertical dotted line) and the price of the US Dollar Index (orange line) against the price of the GLD (blue line), a gold trust.

For example, when the Fed raised rates in December 2015, stocks had their worst drop in years to start 2016. Due to the strength of the dollar, China devalued their currency. This sent shockwaves throughout global markets – just as it did in August 2015.

This was only relieved by Yellen sounding dovish, assuring markets that they will not raise rates as expected.

Thus, if rates rise, and when markets and asset prices drop – the democrats will take the flack. Just as George W. Bush took responsibility for all the woes of 2008, Obama will be blamed for this as-well. The average American does not even know who runs what is arguably the most important institution in the world. For all they know, it’s the executive and legislative branches of government creating these booms and busts. It is almost a certainty that if the economy plunges and rising borrowing costs further burden indebted middle Americans, the republicans will blame democrats and their policies.

II. The Mysterious Meeting Between Obama and Yellen No One Cares About

Eyebrows were raised when President Obama called an emergency meeting with Janet Yellen in April. Adding further speculation, the meeting was closed to the media. It is important to note that it is very rare throughout history for the President to ‘summon’ the Fed Chair suddenly.

Ahead of the afternoon meeting, White House Press Secretary Josh Earnest described Obama as “pleased” with Yellen, who he appointed to lead the Fed in 2014. It is the first time since November 2014 that the Fed chair has met with the president on her own. The meeting was closed to the news media.

Being ‘pleased’ with a Fed Chair or any of the central bankers and global Finance Ministers doesn’t mean much. Cutting rates, protecting asset prices from falling, backstopping big banks, allowing and servicing massive debts from bankrupt nations, and letting liabilities pile on. This doesn’t take an Ivy League education to accomplish.

But it is important to watch what the elites say compared to what they actually do. Said simply, talk is cheap. And the chances the President of the United States summons the Fed Chair in person, behind closed doors, to only congratulate is odd – and unlikely. It should be further added that since the meeting occurred in early April, the economy has declined significantly. Q1 GDP, posted last week of April, was an anemic 1.1% and Q2 results from late July missed estimates by more than 50%, (2.5% GDP expected) coming in at poultry 1.2%. 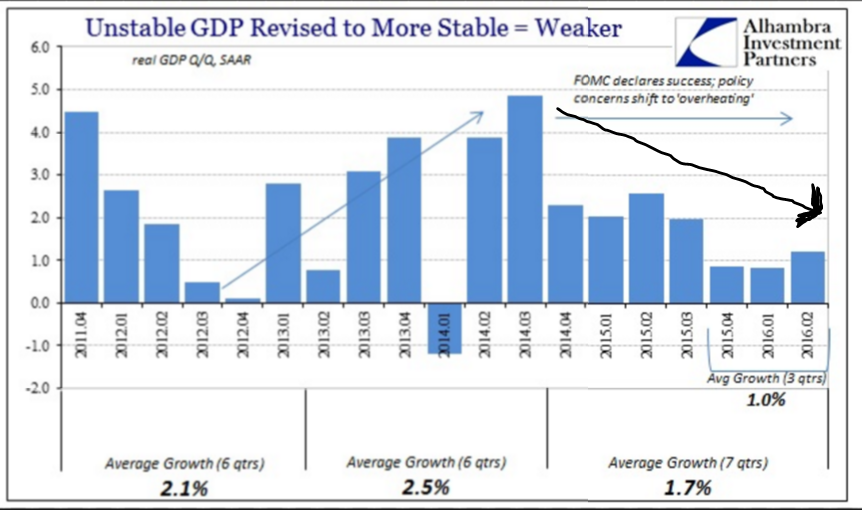 GDP has fallen straight since 2014 peaks – the Fed raising rates in December only hastens the further contraction in economy.

What was really said during that meeting is anyone’s guess – but one can make a valid argument it was about the upcoming election and keeping the economy liquid. This keeps the leviathan running and the democrats gloating about the recovery they gave the American people after the Bush years and the 2008 meltdown.

III. Clinton’s Pockets and the Establishment

It’s no surprise that Hillary gets most of her funding from ‘the establishment’, which consists of big banks, hedge funds, and unions. It should be even more disheartening to learn that Wall St is fully invested in Clinton, and they wouldn’t be if it would hurt them.

After news broke that Hillary was being paid more than a quarter-million per speech by Goldman Sachs, people began putting two and two together.

The speech in 2013 was one of three Clinton made on behalf of Goldman Sachs. According to public records, Clinton gave 92 speeches between 2013 and 2015. Her standard fee is $225,000, and she collected $21.6 million dollars in just under two years. Clinton made 8 speeches to big banks, netting $1.8 million, according to a CNN analysis.

Neglecting the outrageous sums of money her husband, former President Bill Clinton, has made from dubious involvements himself, one must ask themselves: what does she say that is worth so much? The answer is absolutely nothing.

More revelations about the Clinton’s charity group, the Clinton Global Initiative, being a “pay to play” type scheme and her sketchy dealings as Secretary of State are coming out. She barely skid past an indictment for incompetence as Secretary of State, which led to her resignation and an FBI investigation. But the democrats had no one else besides her, and once Obama endorsed her – it was hands off. Thus, as an investors in a Hillary Clinton presidency, one can expect another 4 years of Obama. She is a former lawyer, career politician, and most importantly – she is the establishment.

Donald Trump hardly ever stays on topic and quite often repeats himself and his ego balloons enough to push all logic and reason far, far away from him. But for individuals who want change – Trump is the first candidate to actually offer change in a long time. But some changes within highly complex systems (the world economies) that are barely stitched together can lead to extreme disorder.

In complexity science, this is called a phase shift: imagine a boiling pot of water. Overtime the water starts boiling and bubbling and becoming erratic, when suddenly it changes into steam – a completely different structure from the H2O. It takes a while for it to change, but once it does things are completely different. That is what Trump is to the establishment and global politics – but what about the US dollar under Trump?

The U.S. dollar will weaken sharply if Donald Trump wins the presidential election in November, according to Bloomberg’s Mark Cudmore. But it’s less clear if the sell-off has legs beyond his potential inauguration in January. 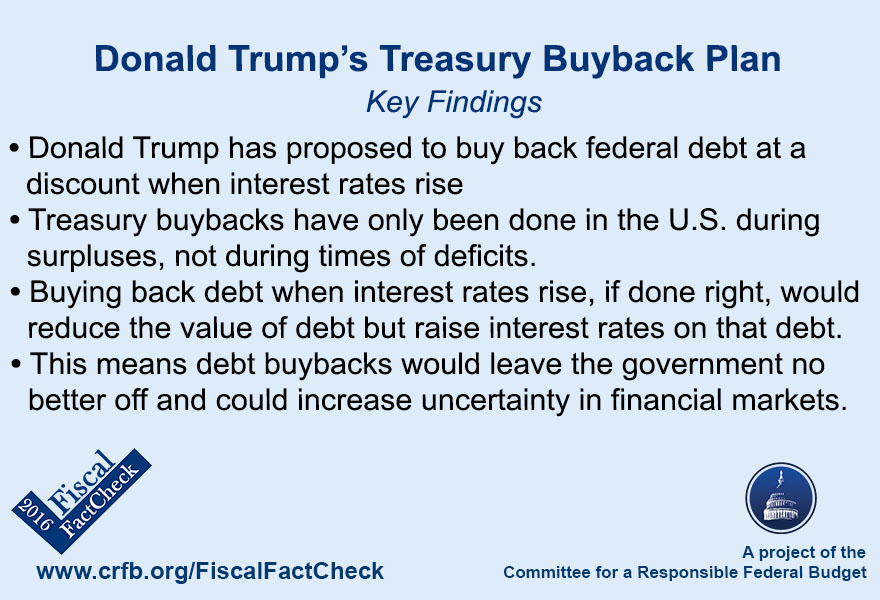 Remember, just a couple months ago, Trump publicly said on CNBC that he would renegotiate the almost 20 trillion National Debt. Imagine the soaring bond yields if he thought he could go through with this. It doesn’t make much sense what he is saying because the US Treasury already borrows at record low yields. And with the EU and Japan going negative, their yield starved citizens and hedge funds are buying US bonds. All this demand for somewhat-above-zero yield is keeping the demand for US treasuries aka debt at all time highs. This allows the US to keep borrowing, on their terms. But in the end, and as nations inevitably learn, interest rates are set by markets. And if Trump disturbs the trust in the value of the dollar and the US solvency – watch out.

Global economies are sailing into uncharted territory with Captains (central bankers and elites) that are drunk at the helm. Honestly – this is all one big monetary experiment. The Ivy League economists and financial advisers will use big, complex and boring words to discourage investors from being wary. They will draw expansive charts and models, explaining what the outcomes will be – but they’re just as scared as the rest.

These times are rather unique. Just recently the Bank of England actually couldn’t get anyone to sell them bonds, at any price, through their QE program. This must have puzzled all academics as how this could have happened – but it did. As yields all over trend to zero and then turn negative, investors dependent on fixed income will hold on to their relatively higher yielding assets as long as possible – not selling for any price. Expect central bankers to get more creative, and more destructive, with their methods.

Swiss National Bank holds about one billion in gold and silver mining stocks. This protects them from any black swan events that will cause their fragile holdings to crash. If chaos happens in the markets and their assets collapse by 25%, and gold rises from the flight to safety, their portfolio of precious metal mining stocks will dramatically rise. This will offset losses they will suffer. This makes them anti-fragile (as discussed in previous GoldStockBull article). 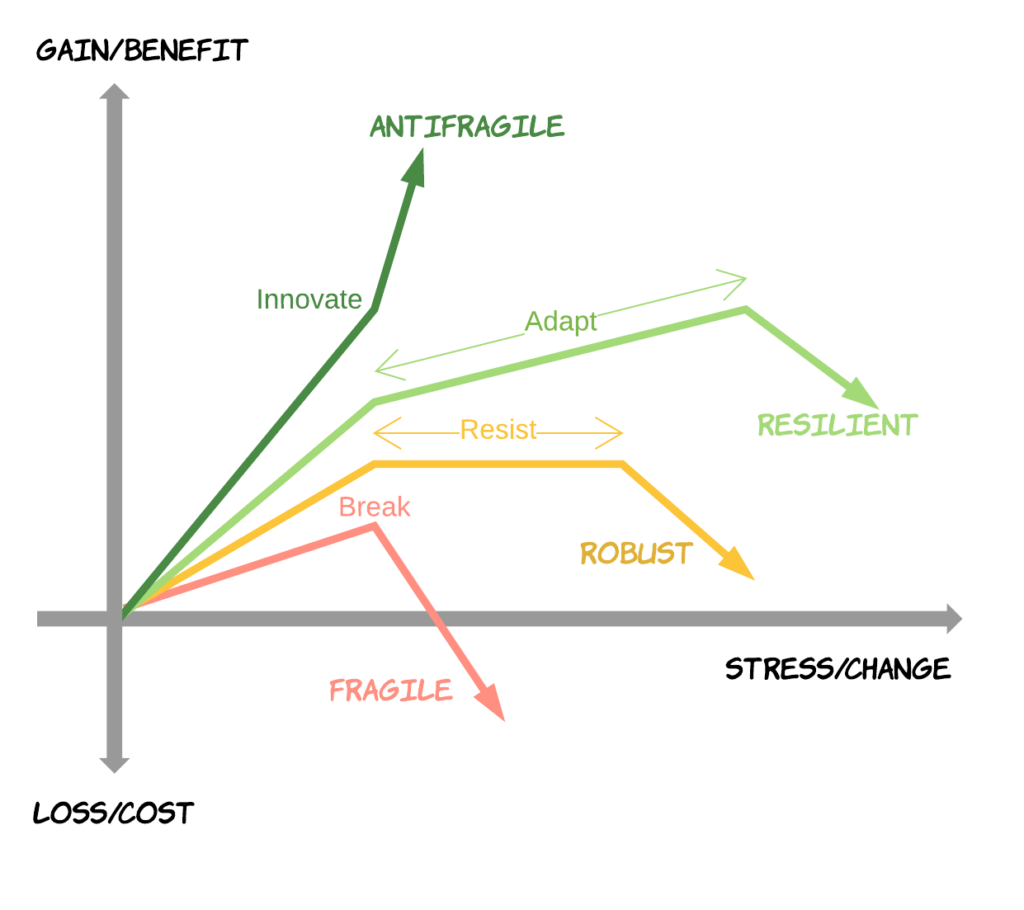 The more stress/disorder that occurs, the more the fragile (pink) suffers and the more the anti-fragile (dark green) gains.

The Swiss are on to something. And with the gold price up almost 30% since the start of 2016, citizens are catching on to that something. And with Trump and Clinton both coming in when times are most fragile in this global complex system – investors need to be anti-fragile; more than ever. Because both are inheriting a mess: Hillary will keep things going the exact same until something breaks eventually, and Trump will force change abruptly and potentially cause the system to break and implode.

Either way – no one is getting away unscathed. We believe this is a critical time to protect your wealth and position your portfolio to profit from the events that will unfold in the final months of 2016.

The Gold Stock Bull Portfolio is up 130% year to date in 2016! To receive instant access to our top stock picks, the monthly Contrarian Report newsletter and weekly updates, click here!