Gold hasn’t been acting as a hedge against geopolitical turmoil at all lately.

It barely budged after the deadliest attack on French soil since World War II killed 129 people. It has only slipped lower since Russia’s military moved into the Middle East for the first time since the botched invasion of Afghanistan in 1979.

In breaking news today, it was reported that NATO-member Turkey shot down a Russian fighter jet that is claims crossed into Syrian airspace. Putin called the act a “stab in the back by terrorist-accomplices.” Russia has for a long time been aware of oil going from ISIS in Syria to Turkey, Putin said. The money is the primary source of financing for the terrorist group, yet Turkey has been purchasing it from them at a discount to market prices.

Putin said Russia respects the regional interests of other nations, but warned the atrocity committed by Turkey would not go without an answer. Moscow plans to suspend military cooperation with Ankara. Sergey Rudskoy, a top official with the Russian General Staff, condemned the attack on the Russian bomber in Syrian airspace by a Turkish fighter jet as “a severe violation of international law”. He stressed that the Su-24 was downed over the Syrian territory. The crash site was four kilometers away from the Turkish border, he said.

Russia now plans to implement new measures aimed at strengthening the security of the country’s air base in Syria and in particular to bolster air defense.

“We warn that every target posing a potential threat will be destroyed,” lieutenant general Sergey Rudskoy said during the briefing.

“All military contacts with Turkey will be suspended,” he added.

One would think this would be enough to rattle global markets and increase safe-haven demand for gold. Yet, the gold price advanced just $6 or 0.60% today.

I don’t think gold investors want global instability and violence to be the driver of their investment returns. But one has to wonder why gold is not generating safe-haven demand they way it once did. Furthermore, record investment demand and declining supplies is also failing to generate higher prices.

This brings us to the controversial discussion about gold price manipulation and the idea that huge demand for physical metal is being hidden covered up by an enormous glut in paper supply.

Without jumping on one side or another of the debate, let’s take a look at a few recents developments that might help to explain why the gold price is failing to sustain any breakout attempts.

Undoubtedly, one of the major reasons that the gold price remains subdued is anticipation of a FED rate hike. Investors believe this will lead to a stronger dollar and lower demand for gold. But the FED is not likely to make any major move with rates, with most analysts predicting an increase of just 25 basis points. Many believe they will need to reverse course within a year of the first rate hike, as deflationary forces increase their grip on global markets. In addition, there is plenty of historical evidence to suggest that gold may rise along with interest rates.

Deflationary forces are also having an impact on the entire commodity sector. Those that argue against manipulation often bring up this point and emphasize that gold is not declining in a vacuum. Oil, natural gas, food, fertilizer, coal, copper, platinum group metals, etc have all experiences rapidly declining prices. In fact, many of these other commodities have declined more sharply than gold.

The paper gold games have certainly become more severe lately. The amount of paper gold has tripled relative to “registered” stocks available for actual delivery. ZeroHedge reported that the gold “coverage” ratio, or the amount of paper claims for every ounce of physical, hit a new all time high of 293 ounces of paper per ounce of registered physical. As you can see in the following chart, the increase in this dilution ratio has been recent and severe. 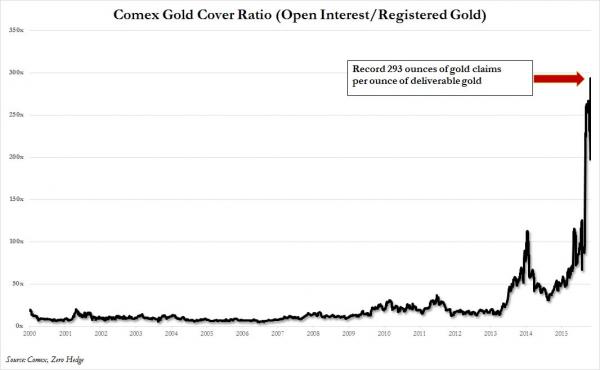 Those arguing the manipulation case believe that paper markets are generating significant downside pressure on the gold price. Perhaps those controlling the paper gold markets can continue their system a while longer. They have the ability to settle contracts in cash and have certainly kept the game going longer than many gold bugs had anticipated.

This could be a contributing factor to why the gold has failed to breakout, despite a sharp increase in geopolitical tensions around the globe. But we could be reaching an inflection point, with less than 5 tons of registered gold left in the Comex vault system. 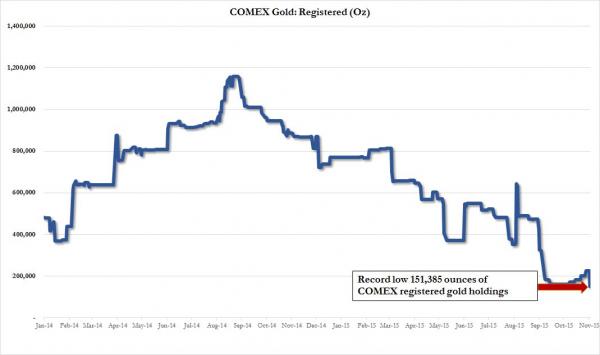 Is there a limit to the amount of paper shorting the can take place as physical gold inventories dry up? Are we close to that point and if so, will short covering force prices much higher?

The recent dip below the 2015 low of $1,072 on the technical charts increase the odds that gold will test $1,000 before prices finally bottom. However, the price quickly bounced back above this key support level and is currently trading at $1,075. So, the short-term outlook is mixed until gold makes a decisive move in either direction.

If the FED raises rates at their December meeting, I expect one final dip and capitulation selling. But I believe any drop below $1,000 will be short lived, as much of the rate hike is already priced into gold and the fear/anticipation about the hike will finally be alleviated. Market reaction to even the minor hike that I anticipate will probably be enough to keep the FED from continuing raising rates for a while. I think we are likely to see the gold price stabilize and push higher heading into 2016.