In the world of crypto, false rumors abound. Talk of a worldwide crypto ban is the latest and most incredible claim of this nature.

Trolls feed off of reactions to their ridiculous assertions. That’s why the number one rule of anything online is: don’t feed the trolls.

Unfortunately, sometimes you can’t help doing just that. While starving a troll out is the best way to cope with it in general, specific circumstances might require a rebuttal.

This week’s case of tremendous trolling involves such an outrageous claim that it deserves to be addressed.

Critics have begun claiming that all cryptocurrency will soon be banned.

The “insiders” at Casey Research claim to have exclusive knowledge of a fantastic future event regarding crypto (this isn’t the first time they have made such claims, might I add):

“They’ve been studying this situation for a full year now. And they’ve received word of a private meeting that will take place on July 21st where the 20 most powerful countries on earth are joining together to discuss cryptos.What’s most surprising, however, isn’t which currencies are most likely to be banned…But, rather, which will be allowed to survive”

Of course, the very premise here makes zero sense. How could 99.9% of cryptocurrencies possibly be banned? Absent a world government, this simply can’t be achieved. And even then, such a ban would only drive activity underground, if history is any guide.

Furthermore, how could someone know this so far in advance and also know exactly which currencies will be spared?

Simply questioning the absurd logic of this idea could make for a short book. For now, let’s consider some reasons why this will never happen.

Today, a Worldwide Crypto Ban is Less Likely Than Ever

There have been so many positive developments in the cryptocurrency community in recent months it’s difficult to keep up. Things just keep getting better and better.

There may even be positive trends on the technical side of things.

The old phrase “sell in May and go away” appears to be in play for now. But there are some indications that a big reversal could be on the horizon.

The chart below shows three significant things happening with the BTC/USD pair: 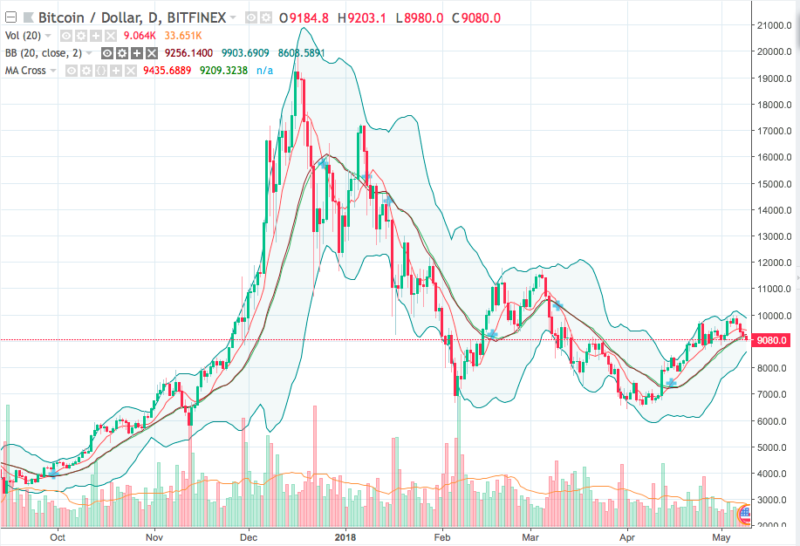 On top of all the positive news, technical indicators seem bullish as well.

As you can see, the last time these three factors combined was at the very beginning of Q4 2017, right before the big run-up to 19k USD.

BTC/USD could re-trace recent lows before beginning its next “bubble phase.”

All in all, the naysayers have begun to run out of misinformation material. You can only cry out that bitcoin has died again so many times. It seems to be the perfect time to create some sensational nonsense. Let’s see how this measures up to reality.

While three major technical developments are converging, so too are three even more important elements coming into play.

NASDAQ, one of the world’s largest stock exchanges, has said they will consider a crypto exchange in the future. They’re also working with Gemini, the second-largest US-based crypto exchange, to regulate that exchange’s markets.

Regulators, in general, seem to have decided that a “hands-off” approach is appropriate with regard to crypto markets.

Most significant of all, in my opinion, is the fact that large institutional investors such as the Rockefeller family have begun to make arrangements to pour fiat into bitcoin. This has huge implications and could lead to an avalanche of new capital flowing into the crypto markets in the near future.

Mainstream financial markets have begun to express interest in crypto. Is this suggestive of a worldwide crypto ban?

The CEO of NASDAQ recently told CNBC that a crypto exchange is being considered. The company is only waiting for clear regulatory guidance, at which point they will likely move forward:

“On Wednesday, the company announced a collaboration with cryptocurrency exchange Gemini, founded by early bitcoin investors Tyler and Cameron Winklevoss. The deal gives Gemini access to Nasdaq’s surveillance technology to help make sure the platform provides a fair and “rules-based marketplace,” for their own participants, Gemini CEO Tyler Winklevoss said in a statement.”

NASDAQ may soon get just what it wants. Some regulators have begun to soften their tone. They’re certainly not speaking of a worldwide crypto ban.

Regulators Have Become Voices of Reason

Despite all the hysteria about how to regulate this new, unique, and controversial asset class, some top regulatory bosses have begun to issue statements suggesting that cooler heads may prevail in this heated debate.

This contradicts the suggestion of some kind of worldwide crypto ban.

CFTC Commissioner J. Christopher Giancarlo told Reuters on May 1st that regulators should “respect this generation’s interest” in cryptocurrency.

“There is something going on here that is generational. Just as the baby boomer generation lost faith in the leaders that came before them and tried to seek a cultural change in those days through sex, drugs and rock and roll, I think there is a generation that also has lost faith in us that led them through the financial crisis and they see technology as a way of disintermediating institutions for which they don’t have a great deal of respect.”

Giancarlo also noted the difficulty regulators are having to figure all of this out:

“We are struggling to find out how we apply an old law to really new and different applications.”

Yes, Mr. Commissioner, that much is obvious. Some have gone so far as to speculate that a lack of regulatory clarity is the main reason for most lapses in compliance. We hope you’ll get it right someday.

On the heels of this bold proclamation of protection for the rights of crypto enthusiasts everywhere comes another striking announcement.

Hedge funds owned and operated by some of the wealthiest families in history have begun to express interest in the crypto markets.

Wealthy Dynasties Have Begun to Dive into Bitcoin

It’s not hard to see the value in big names entering the crypto space.

In general, adoption of a new industry and the corresponding investment happen in three broad phases:

It may seem as if 2017 was the year of mass adoption for crypto. But being valued at under $1 trillion suggests otherwise. The constant barrage of negative press has served to keep much of the public skeptical – for now.

“Limited liability venture capital firm, Venrock (a compound of “venture” and “Rockefeller”), is turning its sights on cryptocurrency projects and markets. Famously an investment vehicle of the Rockefeller family, the focus for Venrock since its inception nearly half a century ago is technology and science. Their investments are a laundry list of dominant companies, from Intel and Apple to AppNexus and StrataCom, among many, many others. Cryptocurrency seems like a logical progression.”

There has been talk of this for years. Now it appears to finally be on the horizon. Mass adoption could be a stone’s throw away.

We have been down this road before.

Little more than one financial quarter ago, crypto markets erupted in mayhem over a rumored crypto ban in South Korea. Sound familiar?

Here’s a snippet from Seekingalpha.com:

“South Korea this past week was said to be considering a blanket ban on all cryptocurrency (OTCQX:GBTC) (COIN) trading. While regulatory responses will vary nation by nation, South Korea’s proposed ultra-harsh action is worrying because:”

But no, really, this time it’s for real, right?

The market reaction from this recent worldwide crypto ban racket has been muted so far. Interesting, considering how much wider in scope it is, compared to the Korean rumor. Perhaps the whole thing is more bark than bite.

All in all, these fears have been overblown. They come at a time of tremendous positive developments in the crypto space.

Even if there were a worldwide crypto ban, that would spell certain success for gold mining stocks.

Of course, the two don’t have to be mutually exclusive. Combined, they make for a spectacular investment strategy going forward. They are both hedges against fiat currency failure and also hedges against each other.

“You only attain mediocrity by being a day-trader. If you want to get rich, you have to look at the long-term…you cannot possibly predict a short-term event. You can easily predict a long-term event.”