AuRico Metals is the New Royalty Kid on the Block

Royalty and streaming companies have received plenty of attention from investors over the past decade and for good reason. Their business model is in many ways superior to that of a mining company. By paying an upfront fee for a percentage of mine production, they get a steady flow of cash or metals, upside potential from new discoveries, upside potential from rising metals prices and downside protection with fixed costs. The benefits include:

1) Diversification – A streaming company has agreements with multiple miners, thus spreading and mitigating any potential risk. The larger companies have dozens of deals and multiple streams of income.

2) Unlimited Upside Potential – Since the deals they secure are usually for a percentage of the mine’s production for life, the streaming company stands to benefit immensely if new zones are discovered and actual production comes in higher than originally forecasted. This occurs all of the time in the industry, as drilling delineates new resources, either increasing annual production or vastly extending the life of the mine.

3) Limited Downside Risk – While a miner may see profit margins squeezed as the cost of production rises, the streaming company typically has a contract for a percentage of the gold/silver production, thus eliminating the issue of rising costs. Royalties are paid out of top-line revenue before any operating expenses are accounted for. In addition, the contracts usually contain a number of provisions protecting the streaming company in the event of fraud, misrepresentation, etc. This is all on top of the considerable due diliegence that is exercised before entering into any streaming deal.

4) Favorable Tax Treatment – Streamers enjoy a favorable tax situation courtesy of the Canadian Government. As long as they reinvest their proceeds or pay it out as dividends, they are gifted with a tax rate in the neighborhood of 0-8%. That’s a huge advantage when it comes to net profit margin.

Enter the New Royalty Kid on the Block

AuRico Metals (TSE: AMI or ARCTF) was created in July as a spin-out from the merger of AuRico Gold and Alamos Gold. The company was created to hold AuRico’s Kemess project, a 1.5% net smelter return royalty (“NSR”) on the Young-Davidson mine, and AuRico’s Fosterville and Stawell royalties. It was capitalized with US$20 million of cash, part of which it put to work today in the acquisition of new royalties.

AuRico will pay C$6,850,000 for all of the outstanding shares of Mineral Streams at closing. Net of Mineral Streams’ positive working capital of about C$1 million, AuRico’s acquisition cost is approximately C$5.9 million. Consideration will consist of 50% cash (for a total of C$3,425,000) and 4,753,951 AuRico Metals shares.

“We are very excited to be announcing this acquisition – our first investment to grow our royalty portfolio – only two months into our existence as AuRico Metals,” commented Chris Richter, President and CEO. “The Hemlo – Williams and Eagle River royalties are an excellent fit within our portfolio of high quality cash flowing royalties located in top tier jurisdictions, and together with the Young–Davidson and David Bell royalties we now have four royalties in Ontario giving us exposure to some of the best gold mines in the province.”

The share issuance is conditional on TSX approval, and closing of the transaction is expected to occur on or about September 15, 2015.

The share price bounced 3.3% higher today, after the announcement that AuRico Metals had acquired the new streams. It is still down significantly from the $0.90 high achieved a few weeks ago.  There is light support around $0.65 and additional support at $0.55. To the upside, AuRico Metals will need to break through resistance at $0.75 before attempting to reclaim the $0.90 level. Of course, this will be driven mostly by the movement of the gold price and decision the FED makes at its upcoming meeting.

AuRico Metals currently has a market cap of C$77 million. Most of the value is with the royalties, as the Kemess project is not very economic at current gold prices. At $1,300 gold the feasibility study returned a 10% IRR and after tax net present value of C$390 M ($134 M at a 5% discount rate). However, as gold prices move higher, the project will become more valuable and could finally be moved into production starting in 2018. It is expected to produce 105,000 ounces of gold and 44 million pounds of copper annually. 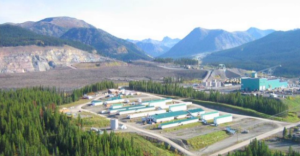 Within their royalty portfolio, there is plenty of upside and growth potential. Young-Davidson has a mine life of 17+ years, Fosterville recorded production in 2014 and returned positive drills results in 2015, and the Stawell Royalty commences on January 1st of 2016.

The share structure is reasonable with 118 million shares outstanding (123 million after acquisition of Mineral Streams). Van Eck owns 15% of the company and Sandstorm owns 12%, after buying another 2% recently in the $0.51 to $0.55 range.

AuRico Metals is a company to watch throughout the remainder of the year and into 2016. As they build their royalty portfolio and gold prices begin heading higher, we could see excellent returns for investors willing to snap up shares in the early innings.

Disclosure: I do not currently own shares and I was not paid to write this article. I may add shares to the GSB model portfolio at some point in the near future.