Big news happened in the Bitcoin space this week when Bitcoin Cash was created on August 1st.  A group of miners “forked” from the main bitcoin blockchain. This happened by moving to a software code that changed the rules by which the network functions. In a way, now there are two versions of what we knew as “Bitcoin” the currency.

What is a hard fork? In simple terms: a hard fork is a permanent divergence in the blockchain.

Slowly, miners backing the project succeeded in officially branching off, and ultimately added blocks to the separate blockchain. This marks the end of a controversial effort that began a couple years back to increase the block size limit, which controls how many transactions can be processed.

The defining moment came at around 8:20 a.m. ET – the time miners running the new software had agreed to begin diverging from the main chain. It started at approximately 12:30 p.m. UTC at block number 478,558. At around 6:15 p.m. UTC, ViaBTC mined the first Bitcoin Cash block, which came in at a block size of 1.915 MB. With the creation of this first block, Bitcoin Cash entered a new phase in which it became an actual network.

The price of Bitcoin Cash has fluctuated wildly since the fork. While most people expected the price to drop sharply after the new coins were available, it actually shot up from a low of around $215 to $750 overnight, before settling at the current price just under $600. When you combine the value of Bitcoin and Bitcoin Cash, since holders of Bitcoin received free Bitcoin Cash, the total value is around $3,330, representing a new all-time high for Bitcoin.

Note that prices have varied widely across different exchanges. On Bittrex.com, the price briefly broke through $1,000 and nearly hit 0.5 BTC per Bitcoin Cash. It is currently trading around $800 on that exchange, but the wallet says “under maintenance” and cannot be accessed, preventing any arbitrage (at least on my account). 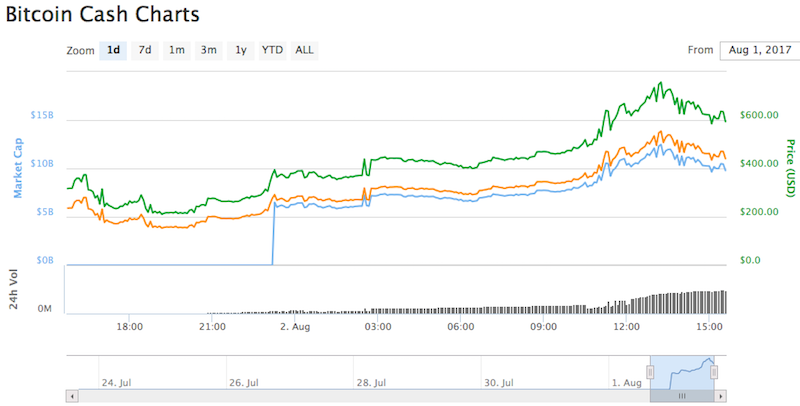 Now it is up to the market to decide what comes next in terms of price and adoption of the new currency.

In the U.S., Kraken announced they will support trading in Bitcoin Cash. In a blog on their website they stated, “All Kraken clients holding Bitcoin (XBT) balances at the time of the fork will be credited with an equal amount of Bitcoin Cash (BCH).”

There’s nowa growing list of exchanges that support BCH including ViaBTC, Bittrex, YoBit. HitBTC, CoinExchnage, NovaExchange, and others. Of the more than 20 bitcoin mining pools, ViaBTC is the only pool to publicly support Bitcoin ABC so far. However, many expect more to join in mining on the new chain.

If you have your Bitcoin in a wallet or exchange that supports Bitcoin Cash, you can sell the equivalent amount you have, which is equal to your Bitcoin holdings. However, many have been cautioning against that, since Bitcoin Cash may actually take off if more miners plan to point their hash-power to that chain. If you are unsure, the best thing is to do nothing at this point in time.

While all this was happening, the price of Bitcoin (BTC) held strong, and is currently trading at around $2,750. Ethereum saw a small increase, but then gave up some of those gains, settling around $230. 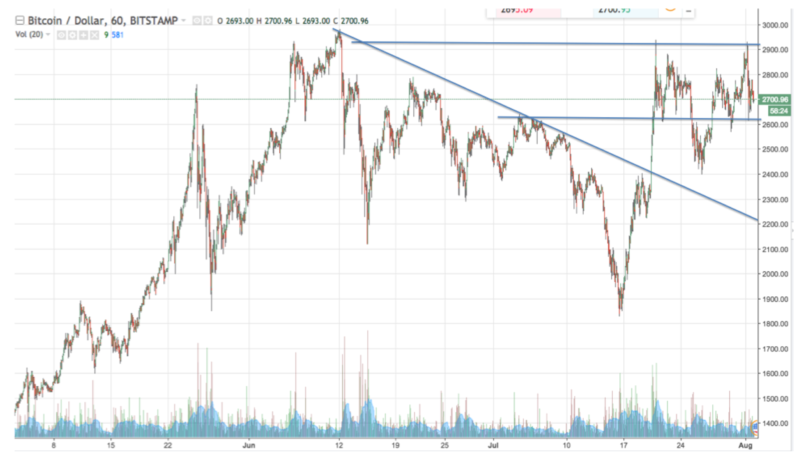 Ethereum has Broken out of a Trading-Range to the Upside 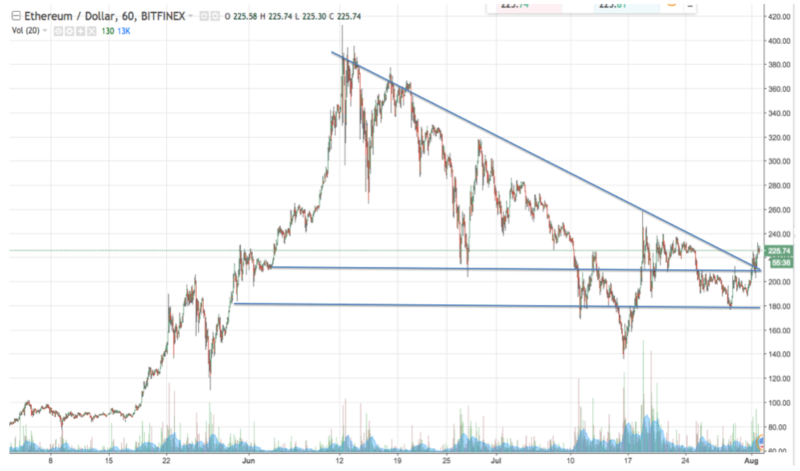 Earlier this week, Boxing great Floyd Mayweather posted a photo on Instagram advertising the upcoming Stox ICO. This project will go live on August 2nd and very few people have heard about the project up until now. This raised many alarms in the community, as well it should.

Now that celebrities have gotten involved in advertising cryptocurrency ICOs, many have argued things are going from bad to worse as far as the hype-cycle. It takes dedicated research to decipher value from scams, which is why we work hard to bring you the best analysis.

Many ICO projects will fail sooner or later and while it’s true there are sophisticated individuals in this sector, projects with the best intentions can quickly go off the rails. Many cryptocurrency ICOs are not audited by a third party before their crowd-sales begin and investors are taking their due diligence seriously. 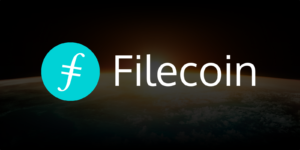 Filecoin, a well-known company in the space with a track record going back to 2014, launches its token sale next Thursday July 27. The initial coin offering is notable because it is pioneering a new way for holding token sales that attempts to address one of the questions hanging over these crowdsales: whether or not they are legal.

Up until recently, the SEC had not yet commented on whether crypto tokens that also function as equity in their networks are securities and the industry has largely tried to self-regulate. Protocol Labs along with AngelList both have created a new venture announced in May—CoinList, which plans to connect investors with new tokens. It just so happens that Filecoin is the first offering available on the site. The ICO is only opened to accredited investors which include only people with a net-worth of more than $1 million or income of $200,000 a year or more.

The website is live according to an email from the company, “The Filecoin page is now open on CoinList! This page is the jumping off point for the Filecoin Token Sale. It includes an overview of the Network and the project, collects all the documents related to Filecoin and the token sale, and lists recent news articles. Once the token sale starts, investments will be made through this web page, and a graph of the sale progress will appear.”

ICO Tokens Are as Good as Securities According to SEC

In a recent report the SEC stated tokens offered during the cryptocurrency crowd-sale can be considered as securities.

The rising popularity of ICOs as an effective fundraising method has woken up the Securities and Exchange Commission (SEC), which has designated the digital tokens as securities. The investor bulletin was posted on the SEC website at this link: https://www.sec.gov/oiea/investor-alerts-and-bulletins/ib_coinofferings.

The recent SEC announcement is becoming a major concern for many startups as they prepare to launch their own ICOs or have already done so in the past. The regulatory report was a result of an investigation carried into the controversial Decentralized Autonomous Organization (DAO), built on top of the Ethereum blockchain.

The SEC’s report on digital tokens states that the virtual coins or tokens could be considered as securities, making them subject to the federal securities laws. According to the release, ”

Some firms have already taken this into account, with FileCoin being the first as previously discussed. We expect more firms to take this path in the future and we will watch to see how things play out.

What is ERC-20 and What Does it Mean for Ethereum? 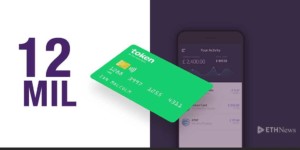 Ethereum is based on the use of tokens which can be bought, sold, or traded. There are several different tokens, from ICOs, which may be used in conjunction with Ethereum. It’s important to understand that these differ from ether, which is the currency native to the Ethereum blockchain.

Tokens represent digital assets that can have a variety of values attached. They can represent assets as diverse as vouchers, IOUs, or even objects in the real world. In this way, tokens are smart contracts that make use of the Ethereum blockchain.

The most used token standard for Ethereum is called ERC-20, which was developed about a year and a half ago.

The ERC-20 defines a common list of rules for all Ethereum tokens to follow and shows developers how to accurately predict how new tokens will function within the larger Ethereum system.

This type of standardization is good for the ecosystem and will help it grow. With this standard, now companies are taking the next step to allow tokens to be spent at retail locations or online, anywhere Visa is accepted. Firms like Tokencard, Monaco, Tenx are ushering in an exciting new age of commerce by combining the regular debit card system with cryptocurrency. This has big implications for international commerce and the under-banked, since now they can obtain cryptocurrency through a smart phone, and spend that money via traditional banking rails.

Let us do all of the research for you! If you want our top cryptocurrency picks, ICO’s we believe will be successful, fundamental and technical research, trade alerts and our monthly letter, The GSB Contrarian Report, simply sign up here.

About the Author: Ryan GSB