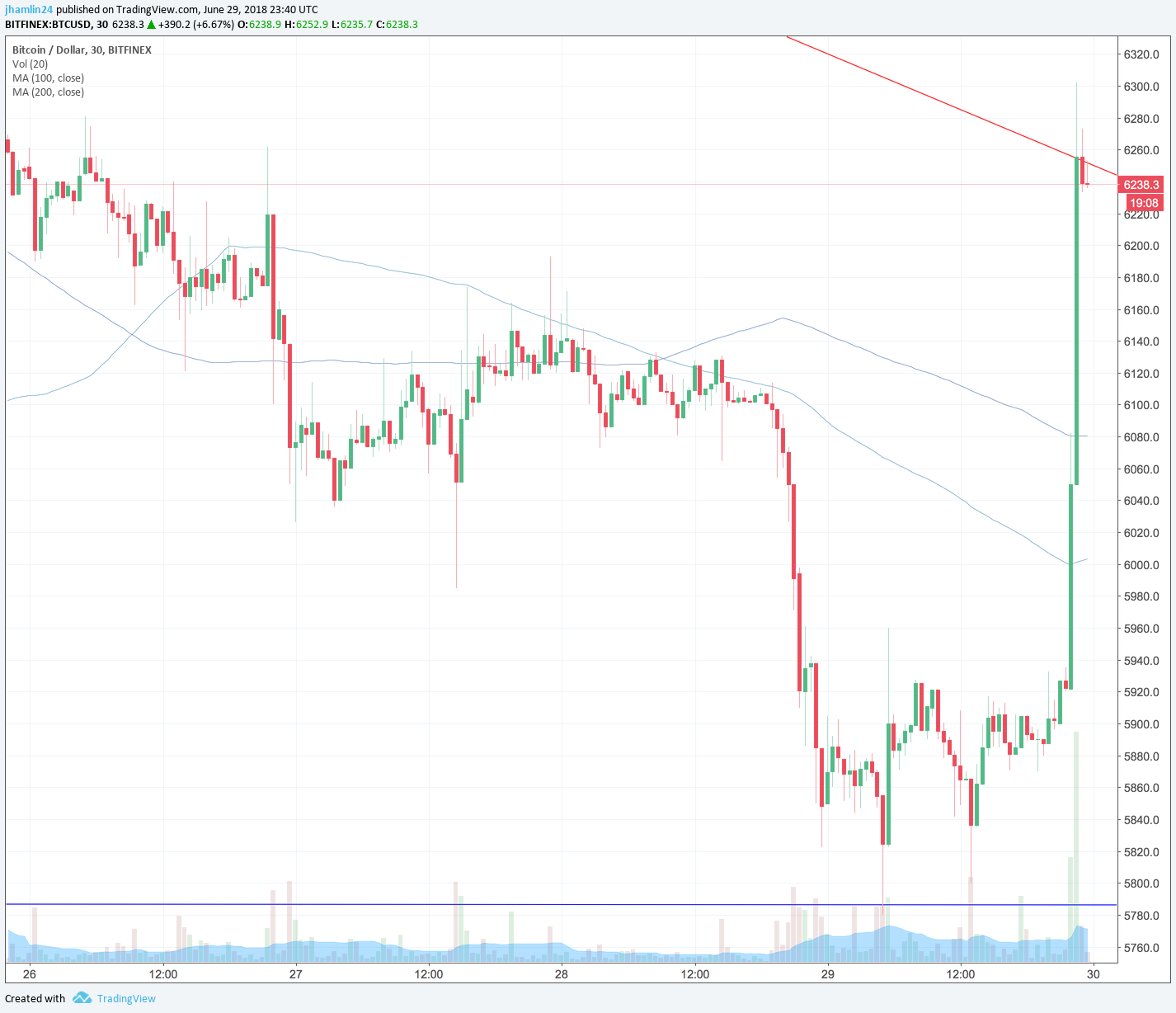 Someone with deep pockets just decided to accumulate a large amount of Bitcoin, causing the price to spike so dramatically. Notice that the rally stopped precisely at the red line on the chart, which is the resistance leg that I have charted. The chart below zooms out to show the longer-term view and highlights key support levels should the price slump again. 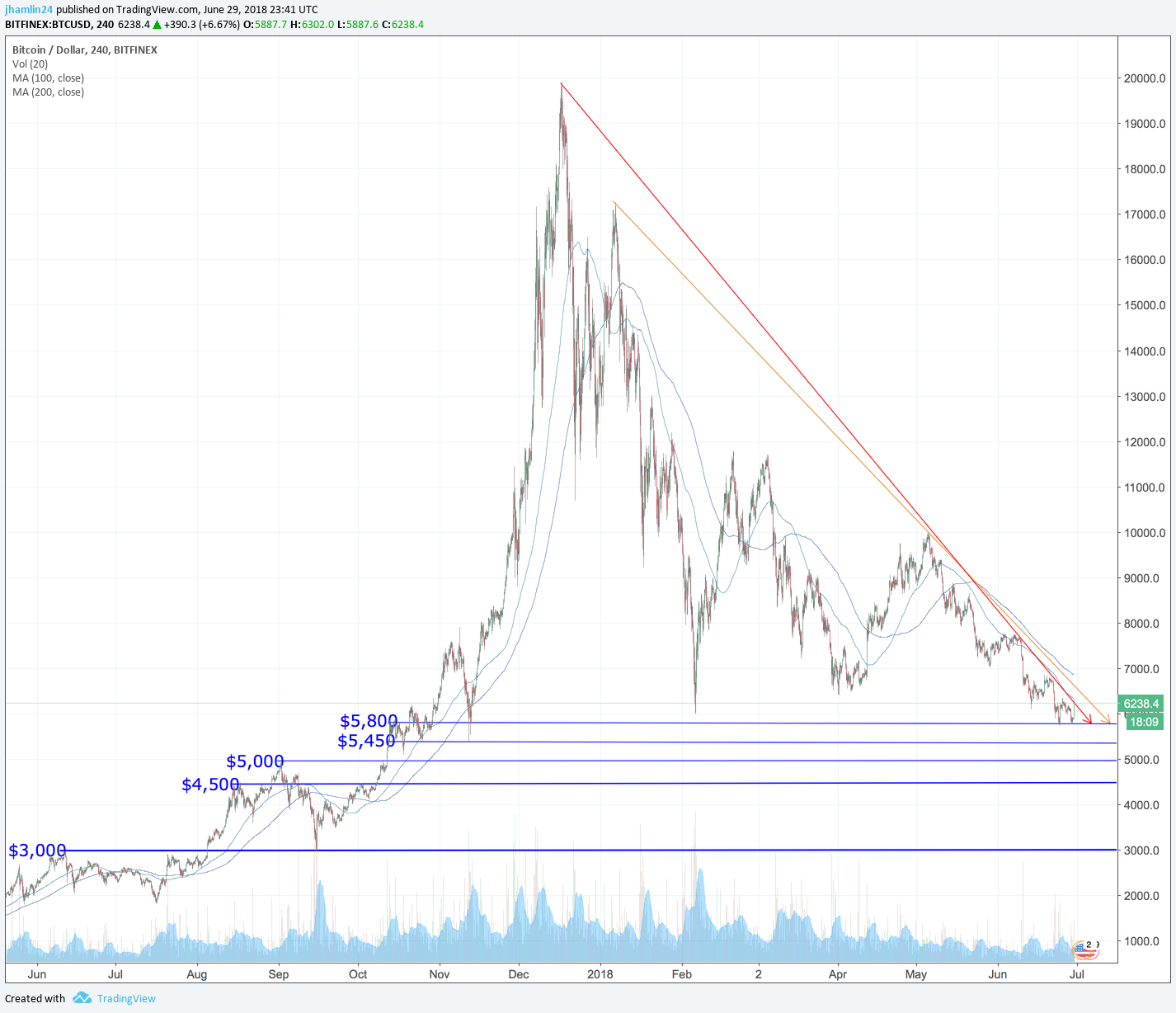 We can see multiple bounces off the $5,800 level, which coincides roughly with the cost to mine a single Bitcoin. This support level is likely to hold going forward as prices rarely persist below the cost of production (in any sector). But if this support fails, there is additional support at $5,450, $5,000, $4,500 and then very strong support at $3,000. I doubt prices will fall to these levels, but anything is possible in this highly-volatile market. Notice that the descending triangle pattern is near conclusion, suggesting that a major price move is imminent. Getting back above $6,800 would be a huge win for Bitcoin bulls.

The declining price of Bitcoin over the past few months is surprising considering how many positive developments have occurred. The news flow has been incredibly bullish, yet the price has continued dropping. I think this creates pent-up momentum and will help greatly amplify the next rally. Consider the following bullish news developments that have occurred as the price has declined:

U.S. Securities Regulator Unveils Proposal to Ease ETF Approvals as The SEC Is Seeking Comment on Yet Another Bitcoin ETF

I think the approval of a Bitcoin ETF is one of the most bullish developments that could occur this year. It would create a new vehicle for acquiring and storing cryptocurrency, increasing demand and attracting institutional money.

Speaking of institutional money, it is already starting to flow into the sector and I believe this pace will accelerate rapidly over the next 12 months.

Love or hate Facebook, they have one of the largest and most powerful advertising platforms. This news that they will once again allow cryptocurrency ads will help bring awareness to the market and should accelerate mainstream adoption.

The FUD from this news caused crypto prices to drop sharply. So, can we get half of that price drop back now? At any rate, the hacking of a single exchange should not reflect so negatively on the entire sector.

SEC says Ethereum is Not a Security

This was absolutely huge news and the markets just shrugged. Maybe they are taking time digesting it, but the regulatory threat against crypto declines with each passing announcement. This is very significant, as I have viewed regulatory risk as the biggest risk to the sector at large.

Yet another fiat on-ramp into cryptocurrency, creating new demand in the UK. The more onramps, the faster adoption will pick up pace and the sooner we leave behind the unfair and antiquated financial system.

Tether has a law firm confirm they have fiat funds to back their coins. Then issues 250 million more USDT tokens.

Some have speculated that Tether issuing coins that had no backing artificially pumped up the price of crypto in late 2017. This news should put those fears to rest, as the law firm FSS was founded by former federal judges, including a former FBI director Louis Freeh. It is not as good as a full audit, but Tether claims the major auditing firms are hesitant to work with crypto companies. Some have claimed that the bulk of the late 2017 rally in crypto was driven by unbacked Tether injected into the market, so this law-firm verification of funds is significant.

Mt. Gox trustee would not be liquidating any more Bitcoin positions, instead returning actual Bitcoin to claimants at some point in 2019.

The selling of massive amounts of Bitcoin on open exchanges in a short time period definitely contributed to the sharp correction in 2018. The news that the selling is over and future payments will be in Bitcoin at some point next year is very bullish and should have led to prices recovering much of the losses caused by this FUD.

This allows residents of New York to more easily buy and sell Bitcoin using the Square Cash app. This should lead to an increase in demand and adoption in The Big Apple. I have tested the Square Cash app, found it easy to use and the prices competitive to buying on Coinbase. Use this link and we both get $5 added to our accounts.

I continue to expect Bitcoin to hit new highs before the end of the year, as difficult as that might be to imagine in the current state of negative sentiment. Buying during dips is one of the hardest things that investors can do, yet it is usually the most profitable.

While Bitcoin is likely to do very well over the next 6 to 12 months, I think there are much greater gains to be had in some of the top-tier altcoins. We currently hold 15 cryptocurrencies in the GSB model portfolio. Subscribe now to our newsletter to view our top picks and get regular buy/sell alerts in this sector. But hurry, prices are not likely to remain this low for long and we are very overdue for a major bounce in this sector.