Bitcoin’s Historic Growth to $10,000 and Bright Future Ahead

2017 has been an epic and historic year for bitcoin and the crypto community.  The total market cap of all coins combined has grown from a mere $18.3 billion in January 2017 to over $300 billion as we enter December of the same year.  The price of bitcoin reached a then-historic high of $1,000 on New Year’s Day.  After pulling back to as low as $750 by March, a slow and steady rebound began.  By May 1st, it made another all-time high of $1,400.  And now, seven months later, $10,000 has at last been surpassed.  While breaking this barrier has potential to increase confidence in bitcoin and crypto as a whole, it should be noted that a correction might be imminent.

Today’s infographic from Blockchain Intelligence Group helps to visualize the ups and downs of this incredible journey to $10,000. Click on the image to expand it. 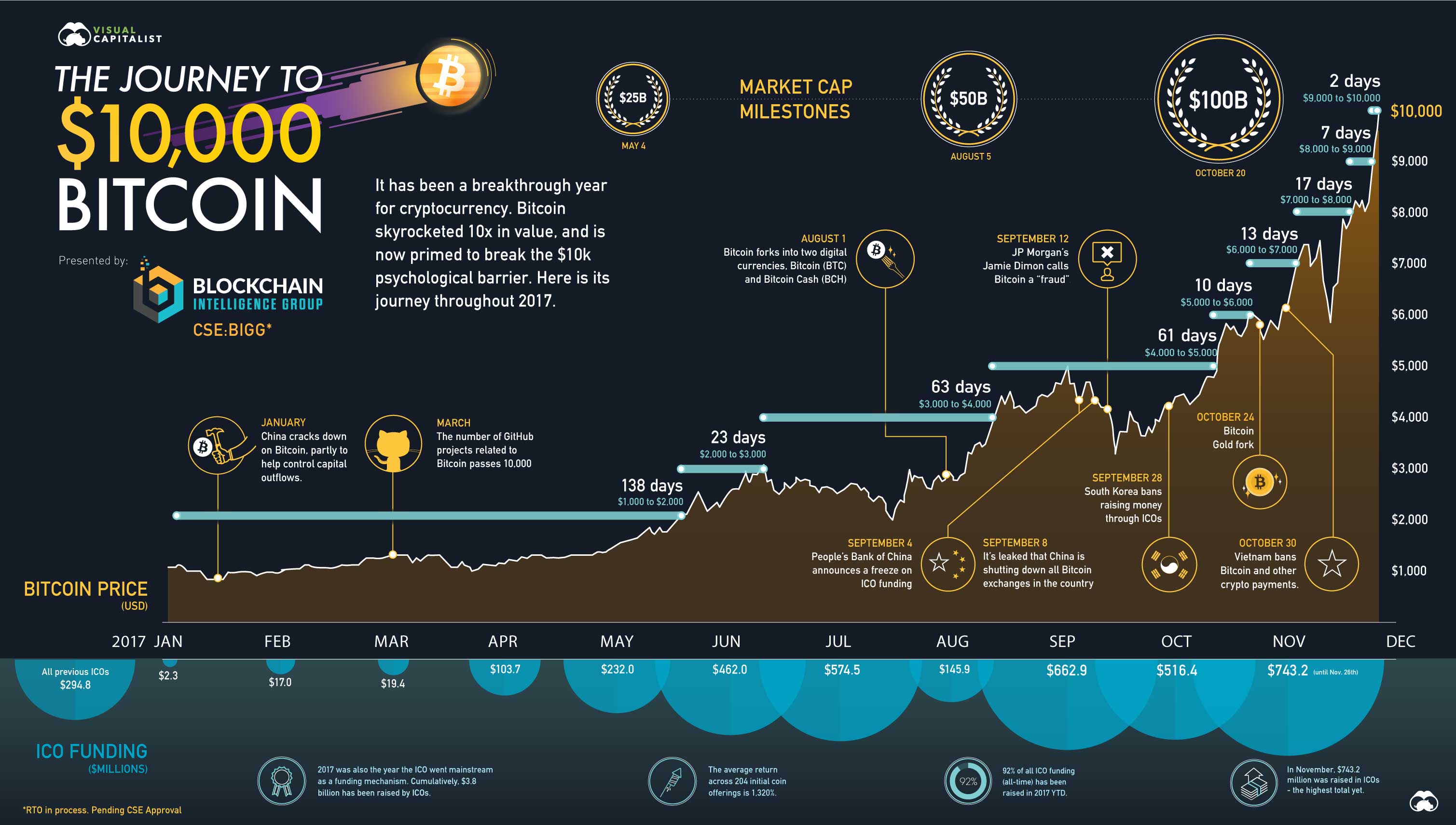 Although bitcoin is known for its volatility, the past few months have seen very little movement in any direction other than up or sideways.  It may be overdue for a significant correction to the downside.

As a matter of fact, Bitcoin tends to correct at least once every quarter on average. While these corrections have become less severe in recent quarters, they are still averaging a hefty drop of 29%.  Just look at the following bar graph: 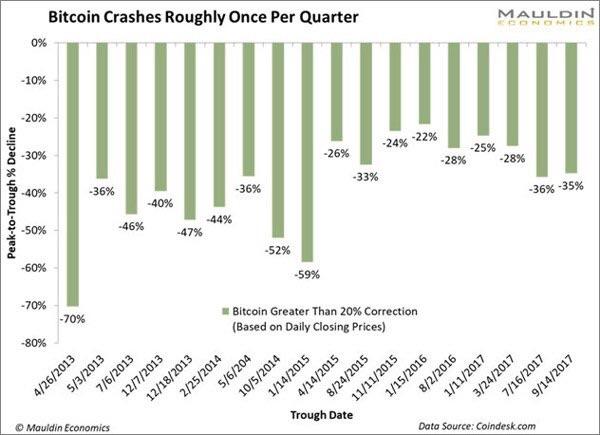 This means that you ought to consider waiting for such pullbacks before exchanging fiat for bitcoin.  The rips tend to be long and exaggerated, while the dips can happen suddenly and recover in short order.  You can either place buy orders based on previous resistance levels on an exchange or keep a constant eye on the markets to do what you can to buy bitcoin on discount.  Be wary, though – waiting for the perfect moment or the absolute bottom will often lead you to miss the best opportunity.

Has the opportunity passed by?

You may be asking yourself, “Is it too late to get into bitcoin?  “Have I missed the boat?”  In response, consider the following words of wisdom:

The best time to get into bitcoin was 2009.  The second best time is today.

Truer words have never been spoken.

While everyone wishes they had exchanged fiat for bitcoin in 2009, eight years from now (or far sooner) people will also be wishing they had done the same in 2017.  As the chart below indicates, the market still has a long way to go before it can be considered “parabolic”.  Our current price target for 2018 is $25,000, and this appears to be a conservative estimate given recent developments.

I prefer the phrase “exchange fiat for bitcoin” to the phrase “buy bitcoin” for a reason.  The words “buy bitcoin” assume that fiat is the only real money and that in acquiring it, one is just speculating.  What so many fail to realize is that with the invention of crypto, a new asset class has been created.  Bitcoin is money – a form of money superior to fiat in every conceivable way.

This brings me to a recent Forbes article entitled “It’s 1994 in cryptocurrency”.  The article makes some insightful comparisons between the Internet rush of 1994 and the state of the crypto markets today:

“With all of the calls of “bubble”, it’s worth remembering that we’re in the early stages of global adoption as well as the early stages of development of the technology.  Capital is flooding into cryptocurrency and like all floods of capital, some will find unproductive uses like the weaker ICOs with poor business cases and governance. But the strong, anti-fragile blockchain protocols are just emerging on the asset class journey.  We are not at the tech commercialization starting line as in 1992, nor the first iteration Web 1.0 finishing line of 1999, but rather somewhere like 1994.”

While these observations in general are astute, the timeline comparison can called into question.  The reason being that unlike the 90s, the Internet already exists. Things happen at superluminal speeds in today’s digital world.  So while crypto may still be in its early developmental phases, no historical precedent exists for the creation of a new asset class in the digital era.

Another significant development in bitcoin involves CME futures.  It’s clear that the creation of a futures market has been a driving factor in the recent price rally, as it signals signs of greater mass adoption. Yet some caution against the concept.

Some fear that the creation of a futures market for bitcoin may result in the same type of market manipulation that has been occurring in the silver and gold markets for some time.  Namely, the potential for so-called “short attacks”, by means of leveraging massive amounts of naked paper shorts and dumping them onto the market at times of low liquidity.  Dr. Paul Craig Roberts has described this process in detail on his blog.

Still, the overall sentiment is bullish.  This may open the door for institutional investors, which could result in massive capital inflows.  The following comes from Bloomberg Technology:

“The allure of bitcoin was too much for CME Group Inc.

The world’s largest exchange owner reversed course today and said it plans to introduce bitcoin futures by the end of the year, only a month after dismissing such a plan. The largest cryptocurrency, which has surged more than sixfold this year, climbed to a record high after the announcement.

…The creation of bitcoin futures is a key step in opening the asset to institutional investors, who currently have few opportunities, said Spencer Bogart, head of research at Blockchain Capital, a San Francisco-based venture capital firm. Bitcoin Investment Trust, currently one of the only avenues for investors seeking bitcoin-backed securities, is trading at a premium of more than 30 percent above net asset value. The trust, known as GBTC, is a “physical” fund, meaning it holds bitcoin itself.”

The CME futures constitute the clearest indicator of bitcoin’s growing mainstream acceptance.  The exact effect this will have on the market once futures begin trading remains to be seen.

What lies ahead for Bitcoin?

All things considered, this is only the beginning.  As the Forbes article states, 2017 is the year that mainstream adoption began.  The process tends to take years (although crypto adoption is unprecedented and could occur even faster).  If bitcoin can rise 900% against the US dollar in less than a year, there’s no telling what it might do in the years to come.  Yet when considering a few critical points, the upward trajectory looks almost certain – the only question will be how far and how fast.

Earlier this year, Cointelegraph reported that Coinbase added 100,000 new users in three days.  In more recent times, a bitcointalk thread has claimed that over 125,000 accounts were created in a single day.  While reports are conflicting, one thing is for sure: as the largest American digital asset exchange, Coinbase has its hands full.  And they’re not the only ones.

Cryptocurrency exchange Poloniex has also been inundated with new users this year.  In June, the exchange had so many support tickets that they had to do away with their “troll box” chat room and re-direct all moderators to support.

Increased exchange and user volume alone tends to increase the price.  But what if it were coupled with a dramatic reduction in supply?

Bitcoin Supply Much Lower Than Thought

Another factor behind the recent rise in bitcoin may come down to the simple law of supply-and-demand.  When people don’t take steps to put their crypto into cold storage, or simply send them to the wrong address, bad things can happen.  The following comes from bitcoinist:

“A recent article in Fortune reported on a research study that was conducted by a blockchain analytics company regarding lost Bitcoins. The New York-based company, Chainalysis, was founded in 2014 and specializes in blockchain analysis and the tracking of cryptocurrencies. Two of Chainalysis biggest clients include the IRS and Europol. In a study conducted by the blockchain forensics company, they arrived at the conclusion that 3.79 million Bitcoins have been lost forever. That is currently almost 23% of the circulating supply and has a current market value of $34 billion. The data is based on the existing supply and transaction activity of the Bitcoin blockchain.”

So bitcoin may be even scarcer than anyone can imagine.  Only 21 million bitcoin can ever be mined. 16,707,275 of those have been mined so far, according to Coindesk.

The finite supply makes mineable cryptocurrencies ideal substitutes for central bank debt-based fiat currencies.  The banks see this coming competition.  In response, some have created their own crypto, as with the CyptoRuble in Russia.  Will anyone use the CryptoRuble?  That is the question.

For now, crypto comprises far less than one percent of all financial transactions.  While more and more merchants have begun to accept bitcoin and other coins as payment, they still account for a tiny fraction of financial activity.  Should this change, there’s no telling what the exchange rate versus fiat currencies will do.

As mentioned before, crypto is a new asset class.  Nothing like it has ever been created before.  Therefore, long-term trends forecasting will often prove futile.  That being said, one thing can be known for certain: as crypto rises to dominance, fiat continues to fail.  What we have seen in 2017 has been a result of not only increasing market cap in crypto but of the value of fiat currencies collapsing against it.

As fiat currencies always return to their intrinsic value of zero, everything measured against them can only become more valuable by comparison.  In other words, the stratosphere is the limit. John McAfee has recently adjusted his 2020 price prediction for Bitcoin to $1 million.

We spend hours every day researching and analyzing the cryptocurrency markets for subscribers. You can get our top picks, buy/sell alerts, ICO research, monthly newsletter, model portfolio, Guide to Investing in Cryptocurrencies and more by subscribing here for just $99.

Please note that subscription prices will be increasing at the end of this month. To lock in the current low rates, sign up today!