Fooled by The Black Swan

John, an electrical engineer living in New Jersey , was conversing on the phone with his close friend Bob. John tells Bob that the plan for himself and his wife to retire at 45 is going as planned. This required overtime at work, reduced consumption and traveling, and aggressive investing – all to be able to meet their goals. The two friends say their farewells. And John hangs up the phone.

Later that evening, John was up watching CNBC as his wife slept. Suddenly he spit his cognac out and could not believe what he was seeing.

“Bishop Regional Bank (BRB), a mid-tier lender, shockingly defaulted on their creditors. BRB declared huge losses in their after hours earnings release, startling analysts that expected a modest profit for the quarter. The CEO of BRB said the huge losses were from a substantial drop in their corporate debt portfolio. As the economy has slowed and the Federal Reserve recently raised interest rates, corporations have suffered diminishing profit margins. Junk bond yields have soared, crippling already suffering companies from having less sales. This comes as a surprise as 81 of the economists we surveyed expected stronger growth in the market this year. Aswell as consensus on The Street for BRB was safe of any toxic loans. Yet, it appears things were worse than thought.

The CEO went on to further state that the economy surprised everyone and that they will be entering talks with their creditors for liquidation. Be wary of what the contagion will be when markets open tomorrow. BRB stock is down 85% in the after hours and still falling.”

John feels he is going to vomit. Bishop Regional Bank was his largest position in his portfolio. How did this happen? His expensive financial adviser, that was an expert in the financial/banking sector, said this was a must own. He raved how it could pay its 6% dividend with no problems at all. He said it was risk free with big reward; a rare feat.
John looks at his portfolio – and feels tears swell up. His US 10 year treasury bonds were still intact. But bank stock as a whole were collapsing, and the market wasn’t even open yet.

He grits his teeth and closes his laptop.

How did this happen? 9 years of savings, wiped out within an evening, John thinks to himself.

Months passed by until John and his wife found solid footing. The majority of their portfolio suffered horrendous losses – roughly 75 cents on the dollar. They pushed their planned retirement out another decade. They stayed out of financial related equities and focused on bonds, cash, and gold (which jumped $215 per oz during the banking collapse contagion – the only thing offsetting the realized losses).

John was fooled by the experts and by himself. But mainly fooled by a Black Swan.

Black Swans and the Antifragile

Nassim Taleb, a prolific thinker and former options trader, wrote a book called The Black Swan and Antifragile (if you haven’t read it – do so immediately).

The premise was the following: Black Swan’s are events that can not be predicted. This would be, for example, a sudden volcano erupting which was supposed to be dormant. He states that most of all the important events in history were Black Swan’s that changed the course of mankind from sudden, unforeseen, and completely random events. An economist creating a model for the risks during the next 3 years in the economy is pointless as the risks that cannot be modeled. Imagine the 2008 housing collapse – no one knew what day Lehman Brothers would collapse nor did anyone plan for that.

There are 3 types of exposure: there is the fragile, which breaks and collapses during chaotic times (John’s over leveraged bank stock). 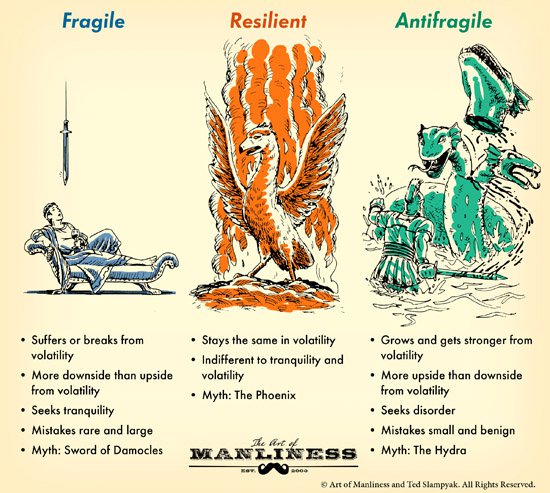 There is the robust, which resists shocks and can endure the calamity (the 10 year US bonds in John’s portfolio). Most individuals believe there is only the fragile

[positive]
and robust[neutral]. But there is the antifragile[negative], which gets stronger and gains from disorder/calamity (the gold in Johns portfolio).

The antifragile feeds off of randomness, errors, and uncertainty created by others. It is simple, whatever has more downside than upside during random crisis events or shocks – such as a terrorist attack in a major city, a sudden hurricane, an over- indebted institution or country failing – is fragile.

“Antifragility is beyond resilience or robustness. The resilient resists shocks and stays the same; the antifragile gets better.”
― Nassim Nicholas Taleb, Antifragile: Things That Gain from Disorder

Don’t Be The Turkey on Thanksgiving

An example would be; its Thanksgiving for year 2010 and a family keeps a Turkey left over. As time passes, the turkey grows and becomes healthy. It is fed daily and kept in a pen for safety – thus i 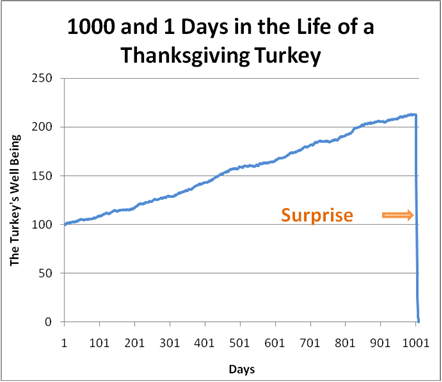 ts confidence grows. Until one day, 364 days later during Thanksgiving 2011, the turkey is suddenly beheaded for the families dinner. Yet, up until that axe dropped, the turkey saw now reason for caution or warning of what was to come. In fact – as time passed, the turkeys safety and assurance of life grew each day as it grew accustomed to everyday life, when in reality as each day passed it neared its demise.

Similar to investors that saw home prices rise for 4 years straight between 2002-2006. After watching prices increase each year they began feeling confident that prices will keep rising (a pattern of routine). They assumed it will go up another 4 years. Thus many buyers that patiently sat by, unconvinced of the rally, finally entered the market and bought at peak prices. They bought high and expected to sell higher. But, suddenly, prices for homes turned and the market began into a free fall the next year (2007). And just like the turkey before Thanksgiving, they became complacent and comfortable that prices would continue upwards when they should have been cautious. Higher prices have risk of lower future returns (10 to 20 is 100% but 20 to 30 is 50%) and the higher something is the harder it can fall. Thus as the risks increased, buyers were feeling confident.

Conclusion? Don’t be the turkey.

The majority of financial advisers adhere to the idea of the Modern Portfolio Theory. This is the notion that the more risk that the investor takes, the more the return. This is mostly true as higher risk assets demand higher yield. But study’s show that individuals that take greater risk are actually left with lower returns over full market cycles – because what MPT got wrong is all investors do not gauge risk the same. Risk in MPT means volatility, whereas this author and value investors gauge risk as loss of capital. Not buying a stock because its price fluctuates is ridiculous – one should not buy a stock that doesn’t make money and can’t pay its bills.

Thus, prudent investors, for fear of being the turkey, must have diligence and not clamor to what the herd is buying. When everyone is positioned based on Efficient Market Theories (all participants in markets are rational and asset prices reflect all current information – how absurd) and MPT models, they are fragile. The Federal Reserves models are fragile. Even most value investors are somewhat fragile. Why? Because when individuals say “hold 85% cash in your portfolio and buy on the large dips” they are still vulnerable. Remember, Black Swans are not something that can be predicted – if they were, than they aren’t Black Swans. A portfolio that is overweight dollars is subjected to purchasing power loss from annual inflation. This author goes one step further: what if the US dollar is the turkey? Major economists and media don’t even entertain the thought of the world without the dollar as the reserve currency. Yet, history is littered with the graves of fallen paper currencies that were thought the same. Thus, the gold is the antifragile as it gains from dollar (the blood of modern society and commerce) chaos.

With all the monetary printing, extremely indebted institutions, 0% interest, and no growth – the dollar could very well be the turkey with the axe hanging above its head.

In this environment, the gold price should continue to rise sharply. Click here for instant access to our top gold and silver stock picks, monthly newsletter and weekly trade alerts.