4 Blockchain Stocks to Consider and How They Perform vs. Holding Crypto

Holding large-cap cryptocurrencies like Bitcoin and Ethereum have been very profitable long-term, but how does this compare to holding blockchain stocks?  And what are some of the top blockchain stocks to consider?

As this new technology and the industry springing up around it grows, opportunities arise in multiple areas.  For example, we’ve recently seen how a company’s stock can shoot to the moon the moment it announces it intends to have anything to do with blockchain.  While the dramatic extent to which this sometimes happens may not quite be justified and does seem to indicate a manic melt-up, it also shows the promise of owning stock in companies that are actually utilizing blockchain and crypto.  There are too many such companies to list.  Here we will take a look at a few of the most prominent.

Online retailers like Overstock.com have been embracing blockchain for years.  HIVE aims to create a union between blockchain and the more traditional financial markets. MGT Capital has a massive bitcoin mining operation running alongside its development of security and privacy hardware.

Overstock.com is an online discount retailer.  They often have items on sale at steep discounts off of manufacturer suggested retail prices, sometimes as high as 75% or more.  They sell just about everything under the sun.  You can get a watch, a laptop, a piece of furniture and a matching rug from Overstock.com.  And you can pay for it all with bitcoin.

In 2014, Overstock.com became the first major retailer to accept bitcoin as a form of payment.  Today they also accept Ethereum, Litecoin, Dash, and others.  The company has also recently announced the creation of its own digital currency exchange.  They have proven to be ahead of the curve when it comes to merging blockchain with mainstream business, thanks to CEO Patrick Byrne’s steadfast support of the new technology.

Back in October, CNBC reported that traders were betting big on Overstock.com due to its investments in the blockchain. 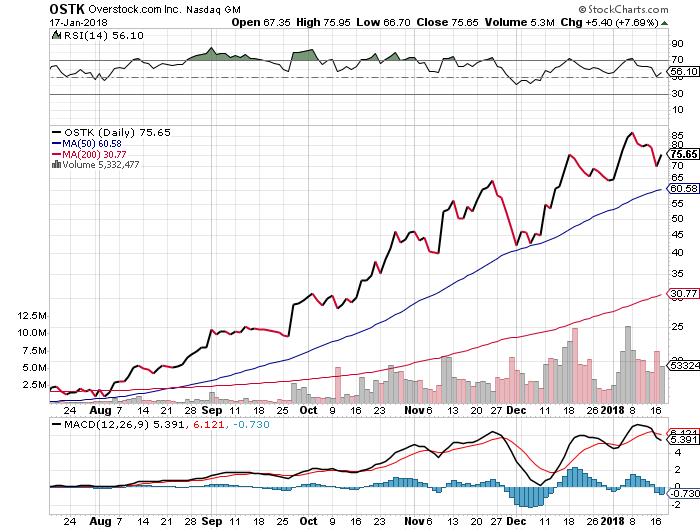 This chart looks seems to reflect a slow and steady rise based on real growth and investment.  No parabolas here.

Below is a video of Overstock CEO Patrick Byrne on Fox Business explaining why his company has embraced bitcoin and blockchain. Byrne is a long-time critic of central bank policies and fiat currency.

Overstock also operates on higher profit margins than Amazon.  That alone makes it appealing.  HIVE Blockchain is another company with legitimate investments in the blockchain.

Hive represents a partnership between Genesis Mining and Fiore Group.  Genesis Mining claims to be the largest cryptocurrency mining company in the world.  Hive’s stated mission is to “accelerate the development of the blockchain sector through traditional capital markets and create long-term shareholder value”.  Sounds like a great idea to me.

Hiveblockchain.com gives a few reasons as to why the company is cash-flow positive.

The company completed its first mining facility in Iceland during May of 2017.  They chose GPU (graphics-processing-units) miners over ASICs (application-specific-integrated-circuits) for the simple reason that GPUs can mine multiple coins, while ASICs can only mine bitcoin.  Their main focus at present is mining Ether.

In October, Bloomberg reported that a company named Bioptix Inc. saw its stock almost double when it only announced that it would be changing its name to “Riot Blockchain”.  This was obviously not due to any underlying fundamental cause.  The name hadn’t even been changed yet.  It’s beyond speculation – more like front-running speculation.  To be fair, there was a reason behind the move, as the company plans to focus on buying businesses in the blockchain space.  But nothing had actually happened to make the stock move.  Not even the planned name change.

The stock has risen well over 300% in the last six months.

This does demonstrate how interested in and attentive to blockchain matters the general public and investment world has become, at least.

Take a look at the following statement courtesy of Riotblockchain.com:

It doesn’t get much vaguer than that.  This introduction tells you almost nothing about what the company actually intends to do.  MGT, on the other hand, has very specific investments in the blockchain sector.

MGT Capital Investments is a cybersecurity company based out of Durham, North Carolina.  MGT has been known by its current name for about ten years.  The company’s history goes back much farther than that, however.  From their website:

Sometime in 2018, MGT also plans to launch the “privacy phone” designed by John McAfee, a long-time proponent of privacy.  The phone promises to have air-gapped hardware switches that allow a user to physically disable the mechanisms inside their phones that allow hackers remote access.

While the privacy phone and Sentinel are great technological advancements for the world, they have been overshadowed by bitcoin.  When John McAfee appears on CNBC, they ask him about bitcoin and his mining operation, not the other things.

The website of MGT Capital Investments has the following to say about its crypto mining facilities:

“MGT is positioned to become the preeminent crypto-mining enterprise in the United States at a most opportune time. Under the leadership of Stephen Schaeffer, President of MGT Crypto-Capital Strategies, MGT has aggressively increased our footprint in this rapidly expanding industry. We operate multiple locations with contracted, low-cost hydroelectric power in central Washington state, managed expertly by Robert Collazo and the Bit5ive Team.”

The stock is up about 200% in the past six months.  Considering all three ventures the company is pursuing seem promising and beneficial to society, this may be a good bet for the long-term.

Sometimes the rise of a blockchain company stock has no legitimate reason behind it at all, as we saw with Riot Blockchain.  Long Island Iced Tea is another, even more, extreme example.  The company changed its name to “Long Island Blockchain” and immediately saw its stock price increase by over 430 percent.

In the same spirit as Riot Blockchain, Long Island Blockchain provided nothing more than a vague public statement justifying their name change.  They say they want to focus on potential ways to leverage blockchain tech, that’s all.

Look for companies that actually have infrastructure and investments in the blockchain.  MGT Capital Investments and HIVE, for example, have mining crypto as an integral part of their businesses.  That means a lot more than a name change.

All things considered, it’s tough to beat the gains seen by holding the largest cryptocurrencies long-term.  Despite this, on a more near-term basis, several stocks of companies in the blockchain sector have, in fact, outperformed bitcoin.

With the exception of Riot, none have outperformed Ethereum in the last three to six months, however.  Ether, the token of the Ethereum network, has seen a rise in market cap of almost $70 billion in ninety days.  As covered in my last article, this likely has to do with exciting new scaling solutions being considered as well as a flurry of new and popular dapps (decentralized applications) being created on the network.

Diversification has historically been a smart strategy for investors and we believe the same is true within the blockchain/cryptocurrency sector. Our model portfolio and watch list contains a blend of cryptocurrencies, blockchain stocks, gold and silver mining stocks, cannabis stocks and select plays in the lithium and cobalt sectors.

We just added 3 new cryptocurrencies during the recent dip and believe this correction is providing an excellent buying opportunity. To view our entire portfolio in real time, plus get our monthly contrarian newsletter and trade alerts, click here to start your subscription for just $195!