The gold price has been rising over the past month, driven by investors seeking safe-haven assets as the stock market sells off sharply. On the technical chart, we can see a bottoming pattern followed by a price spike higher. I am now looking for gold to break above resistance at $1,240, which was support twice in the past year. Major support levels often turn into resistance on the charts and overcoming such resistance levels can lead to an inflow of funds from technical traders. 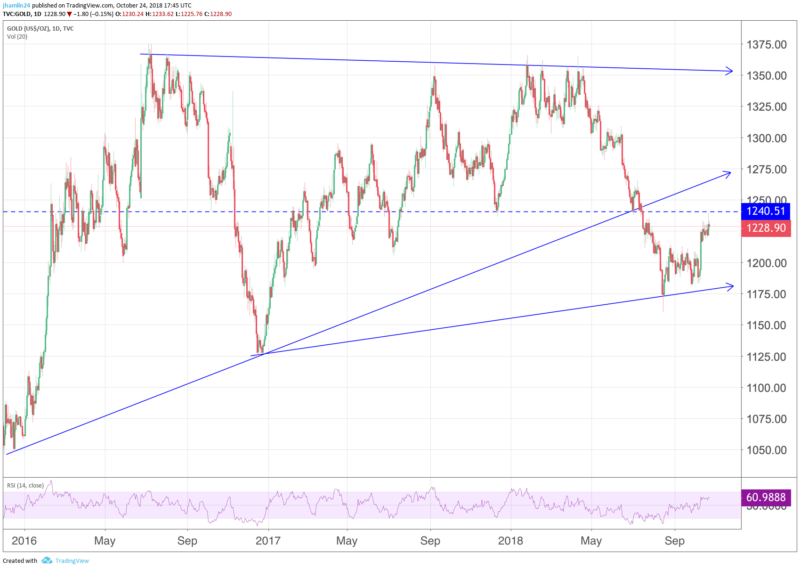 We ideally want to see the gold price climb back above the longer-term support trend line around $1,275. The next major resistance after that is key resistance at $1,365, which has been a top multiple times over the past few years. If the gold price can break above $1,365, it would signal the next bull cycle has started and pave the way for a multi-year run back toward all-time highs. The RSI momentum indicator has room to run higher before becoming overbought, increasing the odds of the price taking out resistance in the near term.

Hungary’s central bank announced it has increased gold holdings tenfold, from 3.1 metric tons to 31.5 tons! Hungarian central bank governor Gyorgy Matolcsy described the move as one of “economic and national strategic importance,” adding that the extra gold made the country’s reserves “safer” and “reduced risk.” This is the first time since 1986 that Hungary has increased its gold holdings, making it a significant event for Hungary and potential sign of things to come from other nations.

Hungary isn’t alone in its mission to diversify via increasing gold reserves. Last week we learned that Poland became the first European Union (EU) member to increase its gold reserves in two decades. The National Bank of Poland (NBP) acquired gold in two batches: two tonnes in July and seven tonnes in August, according to IMF data. Poland’s gold bullion reserves now stand at the highest level since at least 1983.

Central banks have bought a total of 264 tons of gold this year with Russia leading the way. The Russian central bank added 26.1 tons of gold to its hoard in July alone.  Russian gold reserves increased 224 tons in 2017, marking the third consecutive year of plus-200 ton growth. As you can see in the chart below, Russia’s gold reserves has quadrupled since the 2008 financial crisis. This comes alongside a strategic divestment of U.S. Treasuries.

In February, Russia passed China to become the world’s fifth-largest gold-holding country. China has not officially announced any additions to its reserves since 2016, but many speculate the Chinese might secretly stockpiling the yellow metal as well. By keeping their purchases a secret, they do not impact the price as much and are able to accumulate for gold at the currently depressed prices.

The top 10 nations by gold reserves is listed below. As you can see, Russia is now in the #5 spot with roughly 2,000 tonnes and the United States is still the leader by a large margin with 8,133 tonnes. This assumes honest reporting of the gold reserves by consistently dishonest governments. 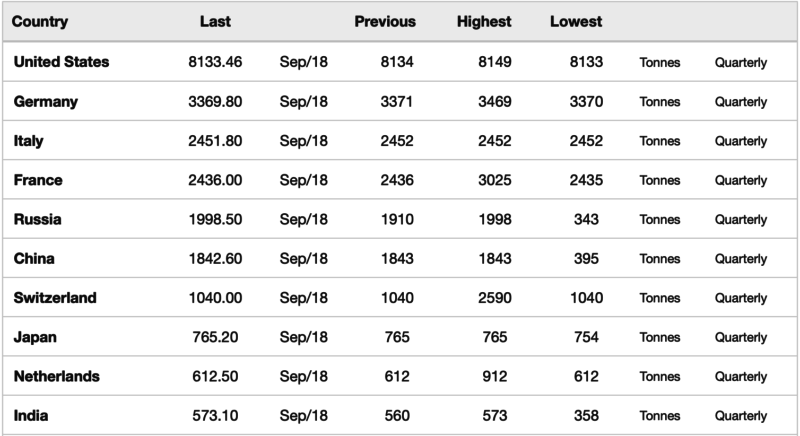 ETF holdings grew each of the last seven trading sessions, marking the longest run of gains since April. The chart below show demonstrates renewed investor interest in gold ETFs over the past month or two, which could market the start of a new bull cycle for gold. 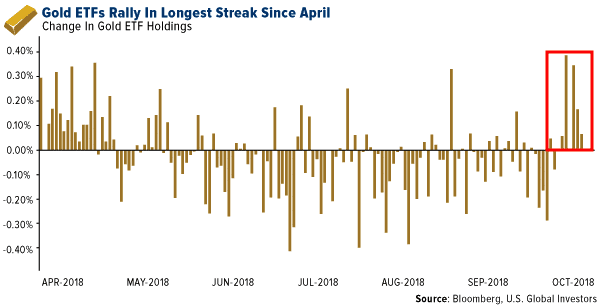 Gold mining stocks are very undervalued relative to the gold that they mine. The HUI/gold ratio is currently at 13, versus an average closer to 35 over the past 16 years. The ratio traded above 60 briefly in 2003 and above 50 for much fo the bull run from late 2003 to 2008. 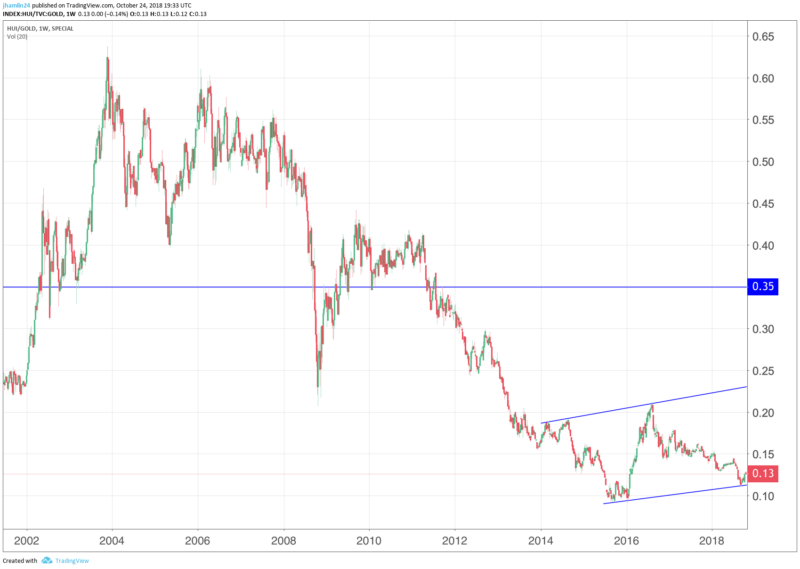 With the HUI/gold ratio so low, it increases the odds that mining stocks will offer leveraged gains versus gold into the future. I expect leverage of 3x or more for quality miners during the next move higher, as profit margins increase much faster than gold prices. If the stock market continues to decline, we are likely to see more funds move into precious metals.

At Gold Stock Bull, we focus on identifying junior and mid-tier mining stocks that are under-appreciated by the market and undervalued relative to their peers. Get our research and all of our top picks by subscribing here.