I wasn’t expecting that much open-mindedness from a government institution.

After bottoming around $6,000, the Bitcoin price has bounced back to $7,600 with a bullish series of higher lows and higher highs. While it is too early to say for sure, it looks increasingly likely that the bottom is in and that cryptocurrency prices will resume their upward trajectory going forward. 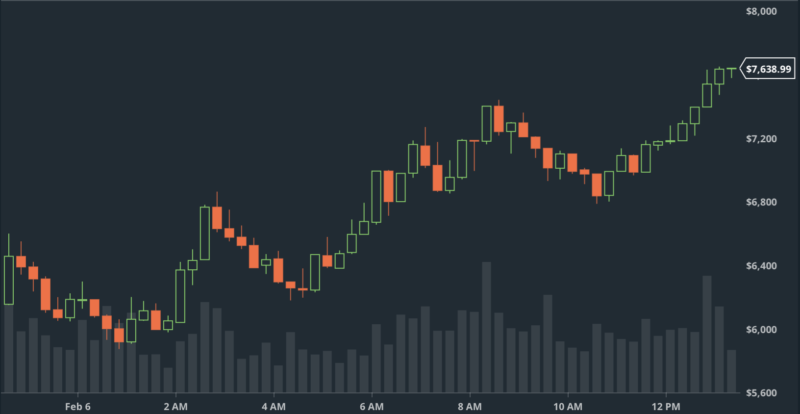 Here were some of the highlights and key takeaways from the meeting:

– CFTC Chairman Gaincarlo started off by saying his kids were not interested in stocks but are hooked onto cryptocurrencies, and the government has to respect that, and develop a positive outlook.

– While scams and fraudsters must be cracked down, the general market must be allowed to develop. A working group of SEC, FINCEN, CFTC and other group members are working on identifying scams in this space.

– They talked about the importance of customer education on how cryptocurrencies work.

– When asked if crypto and bitcoin has any “intrinsic value”? – the reply stated that there is an intrinsic value and relation of the value of bitcoin and the cost of mining it.

– Market cap of Bitcoin is equivalent to just one publicly traded company like McDonalds. In comparison, global money supply is 7.6 trillion. And since Bitcoin has been compared to digital gold, the value of all gold in the world is 8 trillion. This suggests that the cryptocurrency market is not overvalued, particularly after the recent correction.

– Venezuela Petrocoin and Russia Cryptorouble (and North Korea) were discussed – they were seen as ways these countries could use crypto assets to skirt US sanctions. Though SEC chair addressed that there was not much they could do, but are working with Feds & the treasury.

– Ethereum was mentioned as a second generation cryptocurrency with more features than Bitcoin.

– HODL was explained (inaccurately as “Holding On For Dear Life) however it was used in an argument for the classification of these as commodities.

– Senator Warner compared the market to the rise of cell phones and said if it continues its historical growth, he could see this market hitting $20 trillion by 2020!

CFTC chairman Christopher Giancarlo had many encouraging things to say about blockchain technology:

“We owe it to this new generation, to respect their interest in this new technology with a thoughtful and balanced regulatory approach, not a dismissive one.

We are entering a new digital era in world financial markets. As we saw with the development of the Internet, we cannot put the technology genie back in the bottle. Virtual currencies mark a paradigm shift in how we think about payments, traditional financial processes, and engaging in economic activity. Ignoring these developments will not make them go away.

DLT is likely to have a broad and lasting impact on global financial markets,” he says. Blockchain style distributed ledger technology “could eventually allow financial institutions to save as much as $20 billion in infrastructure and operational costs each year… and cut capital requirements by $120 billion.”

While I typically favor less government intervention, I think some minimal levels of regulation are probably healthy for the long-term sustainability of the cryptocurrency markets.

CFTC chairman Christopher Giancarlo said that blockchain could have avoided the 2008 crash. He said that blockchain might have changed history by arriving a little bit sooner. Bitcoin was officially released in 2009, showing off the blockchain for the first time. But the global financial crisis arrived in 2008, just a year earlier:

“What a difference it would have made on the eve of the financial crisis in 2008 if regulators had access to the real-time trading ledgers, rather than trying to assemble piecemeal data to recreate complex, individual trading portfolios.”

“I have previously speculated that, if regulators in 2008 could have viewed a real-time distributed ledger (or a series of aggregated ledgers across asset classes) and, perhaps, been able to utilize modern cognitive computing capabilities, they may have been able to recognize anomalies in market-wide trading activity and diverging counter-party exposures indicating heightened risk of bank failure.”

Vice Chair of Senate Intelligence Committee Mark Warner mentioned how in the late 1980’s people thought cell phones would be a small market that would not amount to anything. People that realized the technology for what it was got rich and he eluded to cryptocurrency being a similar situation.

They also mentioned benefits of blockchain:I have spoken publicly about the potential benefits of the technology underlying Bitcoin, namely Blockchain or distributed ledger technology (DLT).

When tied to virtual currencies, this technology aims to serve as a new store of value, facilitate secure payments, enable asset transfers, and power new applications.

Two decades ago, as the Internet was entering a phase of rapid growth and expansion … and governments and regulators were to act in a thoughtful manner not to harm the Internet’s continuing evolution.

This simple approach is well-recognized as the enlightened regulatory underpinning of the Internet that brought about such profound changes to human society. “Do no harm” was unquestionably the right approach to development of the Internet.

You can watch an archive of the full meeting by clicking here.

It appears that U.S. regulators are not going to take a hostile or overly-aggressive approach to regulating cryptocurrencies. This was always the biggest threat to crypto investors in my view, so it was very encouraging to hear mostly positive comments from the head of the SEC and CFTC.

I think fear of regulation has been a key driver of the recent correction in cryptocurrencies. Those fears were overblown in respect to China, South Korea and India. It now appears that the fears were also overblown with regards to U.S. regulations. With the approval of CME and CBOE futures trading and likely approval of an ETF in the near future, the government (surprisingly) does not appear to be fighting the emergence of this new technology and new form of money.

I believe this clears the way for much higher prices throughout 2018 and into the future. I have been buying the dip by adding more Bitcoin, Ethereum and altcoins to the my personal portfolio and the GSB model portfolio. We have also been selectively investing in initial coin offerings from high qualitly companies with strong teams. To get all of our top picks and research, click here.