China’s official news agency published an op-ed commentary today calling for the ‘de-Americanising’ of the world economy. They specifically mentioned the threat to nations with large amounts of dollar holdings, suggesting that one nation should not have the ability to impact the rest of the world economy so powerfully. In other words, one nation should not be able to print the world reserve currency or issue so much outstanding debt.

The world should consider a new reserve currency “that is to be created to replace the dominant U.S. dollar, so that the international community could permanently stay away from the spillover of the intensifying domestic political turmoil in the United States.”

China holds roughly $1.3 Trillion in U.S. treasury bonds, so if they decide to follow their words with action, we may see an accelerated selling of U.S. debt and dollars in the East. I don’t foresee an outright dumping of debt as many are anticipating, but I would not be surprised to see China’s treasury holdings cut in half within the next year or two.

The Chinese move from U.S. dollars to gold has been very aggressive, yet under-reported by the mainstream media. At the current pace, Hong Kong will send, just to Mainland China, an amount of gold roughly equivalent to 50% of the rest of the world’s mined supply. Gold imports from Hong Kong to mainland China are set to double the imports from 2012.

Not only are exports from Hong Kong to mainland China skyrocketing, but Hong Kong itself will likely import over 2,000 tonnes for the year. Considering that global mined supply (excluding China) is only 2,400 tonnes, this leaves the rest of the world scrapping for the remaining 400 tonnes.

One then has to ask where all of the gold is coming from that enters Hong Kong. It is coming from Western nations at a staggering pace. In fact, some have estimated that the United States is exporting more than they produce, quietly selling gold reserves in order to keep a cap on the price. Inventories are down sharply on the COMEX, as can be seen in the chart below. 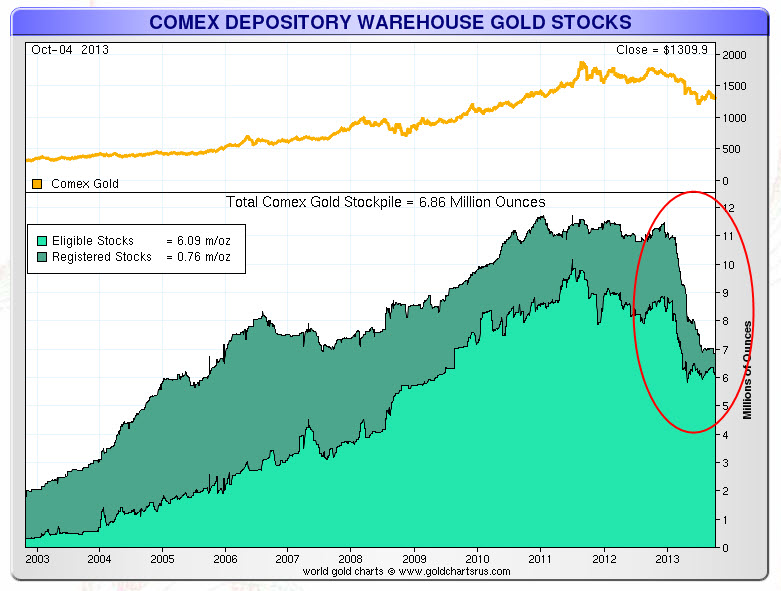 Whatever the exact truth may be, it is evident that China, Russia and other nations are exiting their dollar-denominated holdings in favor of gold. They have also been busy buying up energy resources around the globe and expanding their own reserves. This slow transition out of dollars and into real assets makes sense and allows them to get a good price for the debt they are selling.

This action should put pressure on the dollar and U.S. treasuries, pushing not only central banks, but mainstream investors towards the safety of precious metals and other tangible assets that cannot be defaulted on. There will be a rush out of dollars and into assets with no counter-party risk, it is just a matter of how soon it happens.

The move out of U.S. dollars and debt is well underway, with a series of bilateral trade agreements being established in local currencies and the FED needing to step in and buy an increasing amount of government debt to stabilize the economy and avoid a default. But the true panic has yet to set in, as many continue to have full faith in the ability of the U.S. government to service its debt.

Greenspan famously said that the FED can guarantee cash benefits as far out as needed, but they can not guarantee their purchasing power. The same can be said of the U.S. servicing its debt, so long as the FED continues to assist. So while a standard default may not occur anytime soon, the slow eroding of the dollar’s purchasing power amounts to a default nonetheless. It is simply occurring at a pace slow enough to keep investors and the masses placated or unaware.

However, there are a number of factors that could cause this pace to quicken. It could be driven by the words and actions of China or a failure of politicians to raise the debt ceiling in time to avoid a default. Whatever the spark that ignites the fuse, I believe it is wise to have some insurance against the possibility of a panic out of dollars. Gold and silver are the best insurance for this type of event and they happen to be on fire sale right now with some of the lowest dealer premiums seen in years.

As U.S. politicians of both political parties are still shuffling back and forth between the White House and the Capitol Hill without striking a viable deal to bring normality to the body politic they brag about, it is perhaps a good time for the befuddled world to start considering building a de-Americanized world.

Emerging from the bloodshed of the Second World War as the world’s most powerful nation, the United States has since then been trying to build a global empire by imposing a postwar world order, fueling recovery in Europe, and encouraging regime-change in nations that it deems hardly Washington-friendly.

With its seemingly unrivaled economic and military might, the United States has declared that it has vital national interests to protect in nearly every corner of the globe, and been habituated to meddling in the business of other countries and regions far away from its shores.

Meanwhile, the U.S. government has gone to all lengths to appear before the world as the one that claims the moral high ground, yet covertly doing things that are as audacious as torturing prisoners of war, slaying civilians in drone attacks, and spying on world leaders.

Under what is known as the Pax-Americana, we fail to see a world where the United States is helping to defuse violence and conflicts, reduce poor and displaced population, and bring about real, lasting peace.

Moreover, instead of honoring its duties as a responsible leading power, a self-serving Washington has abused its superpower status and introduced even more chaos into the world by shifting financial risks overseas, instigating regional tensions amid territorial disputes, and fighting unwarranted wars under the cover of outright lies.

As a result, the world is still crawling its way out of an economic disaster thanks to the voracious Wall Street elites, while bombings and killings have become virtually daily routines in Iraq years after Washington claimed it has liberated its people from tyrannical rule.

Most recently, the cyclical stagnation in Washington for a viable bipartisan solution over a federal budget and an approval for raising debt ceiling has again left many nations’ tremendous dollar assets in jeopardy and the international community highly agonized.

Such alarming days when the destinies of others are in the hands of a hypocritical nation have to be terminated, and a new world order should be put in place, according to which all nations, big or small, poor or rich, can have their key interests respected and protected on an equal footing.

To that end, several corner stones should be laid to underpin a de-Americanized world.

For starters, all nations need to hew to the basic principles of the international law, including respect for sovereignty, and keeping hands off domestic affairs of others.

Furthermore, the authority of the United Nations in handling global hotspot issues has to be recognized. That means no one has the right to wage any form of military action against others without a UN mandate.

Apart from that, the world’s financial system also has to embrace some substantial reforms.

The developing and emerging market economies need to have more say in major international financial institutions including the World Bank and the International Monetary Fund, so that they could better reflect the transformations of the global economic and political landscape.

What may also be included as a key part of an effective reform is the introduction of a new international reserve currency that is to be created to replace the dominant U.S. dollar, so that the international community could permanently stay away from the spillover of the intensifying domestic political turmoil in the United States.

Of course, the purpose of promoting these changes is not to completely toss the United States aside, which is also impossible. Rather, it is to encourage Washington to play a much more constructive role in addressing global affairs.

And among all options, it is suggested that the beltway politicians first begin with ending the pernicious impasse.