As of 10am PT on Thursday, October 11, we are now accepting deposits for ZRX on Coinbase Pro! We will accept deposits for at least 12 hours prior to enabling trading. Once sufficient liquidity is established, trading will begin on the ZRX/USD, ZRX/EUR and ZRX/BTC order books. ZRX trading will be accessible for users in most jurisdictions, but will not initially be available for residents of the state of New York. Please also note that ZRX is not yet available through the coinbase.com website and in the Coinbase iOS and Android apps. We will make a separate announcement when that occurs.

Here is a screenshot of Coinbase Pro, showing the addition of 0x:

The move represents the first time the platform has added support for an ERC-20 token that runs on the ethereum network. The price of 0x initially spiked 30% from 68 cents to 88 cents in the first 30 minutes following the news. The price then fell back to 79 cents and has bounced again to 82 cents. The RSI momentum indicator had initially hit overbought levels, but has fallen back into neutral territory at 63. 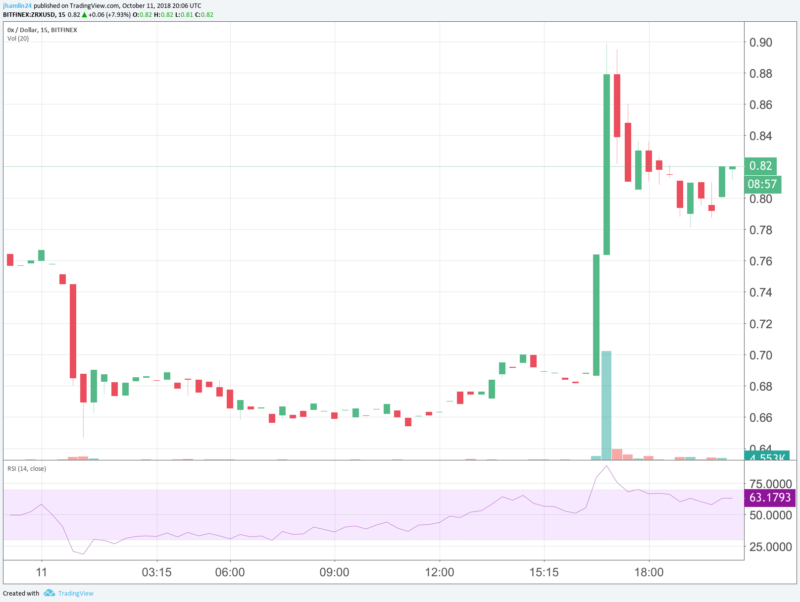 The longer-term chart shows the decline this year from $2.50 to around $0.50. But this recent price spike broke the downtrend resistance line and the price is now challenging the 100-day moving average at $0.82. This level was also prior resistance in September and support in February and June, so it carries technical significance. 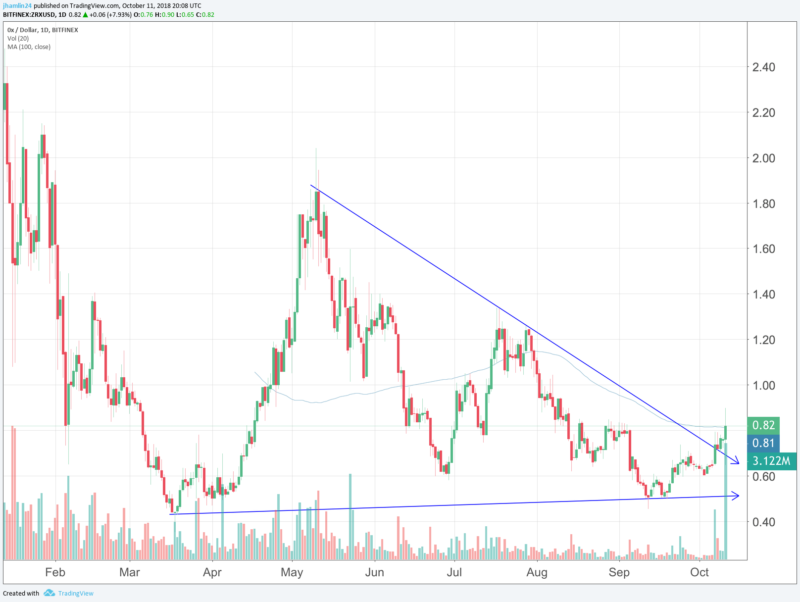 0x (ZRX) has been one of my top cryptocurrency picks for quite some time. They are a decentralized exchange protocol and I believe adoption of DEXs and the 0x protocol in particular will increase rapidly. They have additional use cases for their protocol including exchange functionality within video games, decentralized prediction markets, order books for native utility tokens, decentralized loan platforms and underlying economic mechanisms for stable tokens.

We originally recommended 0x to GSB subscribers at $0.05 during the ICO last August. The price had advanced 50x from our entry price, before correcting and we are still up roughly 1,900% in just over a year. We just issued a trade alert on 0x for subscribers and remain bullish on the long-term prospects for the project.

If you are new to crypto trading and not sure where to buy 0x, here is a list of exchanges where you can buy it. I personally use and recommend Binance.

Which Cryptocurrency Will Be Added to Coinbase Next?

CNBC suggested five coins that might be added next during an episode of Fast Money in July.

As you can nsee, 0x was one of the coin that they put up on the screen and they called this one correctly. Their forecast for the next cryptocurrencies to be added to Coinbase inlude Cardano, Basic Attention Token, Stellar Lumens and Zcash.

Cardano is a decentralised public blockchain and cryptocurrency project and is fully open source. Cardano is developing a smart contract platform which seeks to deliver more advanced features than any protocol previously developed.

Basic Attention Token radically improves the efficiency of digital advertising by creating a new token that can be exchanged between publishers, advertisers, and users. It all happens on the Ethereum blockchain.

The token can be used to obtain a variety of advertising and attention-based services on the BAT platform. The utility of the token is based on user attention, which simply means a person’s focused mental engagement.

Stellar | Move Money Across Borders Quickly, Reliably, And For Fractions Of A Penny.
Stellar is a platform that connects banks, payments systems, and people. Integrate to move money quickly, reliably, and at almost no cost.

The digital asset platform Gemini has already said it’s going to have Zcash on its platform.

“So this one is probably one of the most likely” to be approved by Coinbase, Kelly said.

Cardano is still too early in development and Basic Attention Token has the smallest market cap and is the most volatile of the bunch. Stellar is a likely addition at some point in the next six months, but we believe that the next coin added to Coinbase will be privacy-focused Zcash.

Zcash also allows for transparent transactions, to accommodate for wallets and exchanges that don’t support private transactions. A Z-to-Z transaction appears on the public blockchain, so it is known to have occurred and that the fees were paid. But the addresses, transaction amount and the memo field are all encrypted and not publicly visible. Using encryption on a blockchain is only possible through the use of zero-knowledge proofs. More information on these proofs and Zcash’s implementation of zk-SNARKS is available.

The price chart shows the massive rally heading into 2018 and correction ever since. Zcash was trading at $750 near the peak and is currently priced at just $113. If Coinbase add Zcash, I expect a quick bump in the price to the 100-day moving average around $150. 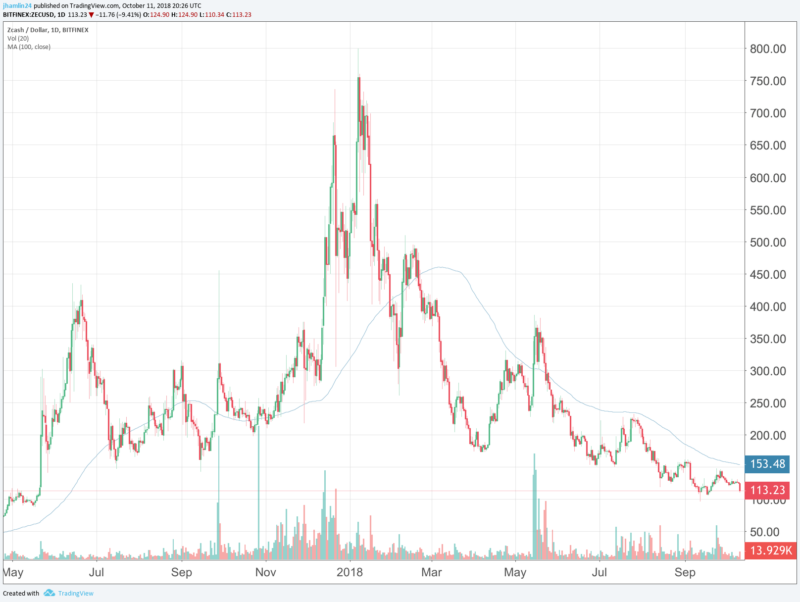 Private transactions are a desirable feature of cryptocurrency and there are alternatives to Zcash such a Monero and to a lesser degree, Dash. But I believe that leading cryptos such as Bitcoin and Ethereum will soon have private send options. At that point, I’m not sure why people would still want to use a privacy-centered coin with less hash power, track record and acceptance. Some have even suggested that Bitcoin may implement Zcash’s zk-SNARKS privacy technology in a future release. For this reason, I am not bullish long-term on privacy coins. But a 50% pop on the announcement of a Coinbase listing is certainly enticing.

We first recommended Bitcoin to our subscribers around $100 and Ethereum under $30. If you followed our calls, you would have a cost basis on 0x of just 5 cents. Get all of our research into cryptocurrencies, real-time access to our portfolio, trade alerts, the monthly Contrarain Report newsletter and much more by signing up today for just $55.