Precious metals have been posting impressive gains over the past three months, with a successive series of all-time highs pushing gold up 28% since the start of September. Silver has posted a similar 3-month gain, but has yet to eclipse its previous 2008 high of $21. With such strong gains in precious metals in such a short time frame, investors are asking the obvious question: Is it correction time for precious metals?

These concerns are well placed as nothing goes up forever and even bull markets have healthy periods of correction and consolidation. Gold analysts and newsletter writers have certainly turned bearish, with many recommending tightening stops, booking profits or hedging positions by shorting precious metals. Commercial COMEX traders increased their short positions recently to a new record high and everyone seems to be bracing for a sharp decline.

Taking some profit off the table and tightening stops seems like a reasonable move at this juncture, but we should stop and consider whether gold is truly overbought and whether the current upleg has really run its course. This can best be accomplished by looking at past uplegs and observing both the percentage gains and number of months these uplegs persisted compared to the statistics for the current upleg. The chart below tracks the gold price since the start of 2005, defines the upper and lower lines of the trend channel and covers the last two uplegs of this secular bull market. 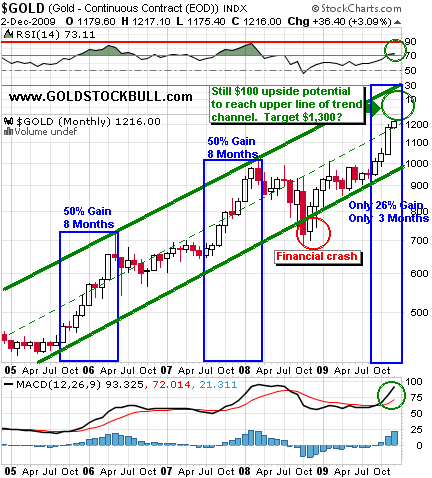 As you can see in the blue rectangular boxes, the past two uplegs lasted approximately 8 months each and they both put in gains over 50% before correcting and consolidating. Both uplegs also started near the bottom of the trend channel and touched the top just briefly before finalizing their runs.

The current upleg by comparison has only been running for about 3 months and has only posted a gain of 26% from it starting point at $950. It has yet to reach the top line of the trend channel and this technical analysis suggests gold has room to advance another $100 before reaching the top of its current upleg. It is also worth noting that momentum indicators, although in overbought territory, are still pointing higher and have yet to reach the levels of previous tops.

Some might argue that the starting point of the current upleg should be closer to $700 and could then postulate that the run is over, having gained over 70%. But I believe the dip towards $700 was an anomaly caused by the financial crisis and not the correct bottom to be using for this analysis. Plus, to remain consistent with previous uplegs, we should be starting around the top of the previous upleg and near the bottom line of the trend channel at $950, not $700.

It is also worth noting that previous uplegs all had a brief period (4-6 weeks) of consolidation half way through the advance. I believe we have reached this half-way point and that a few weeks of consolidation and mild correction could follow. However, this should not be confused with a top or end to the current upleg. Swing traders might attempt to pick up gold and mining shares at marginally lower prices during this phase, but mid to long-term investors will probably do best to simply hold their positions as gold takes a quick breather before continuing to $1,300 and beyond.

While gold has been making a series of new nominal highs, gold stocks have yet to join the party. In fact, the HUI Gold Bugs Index is still a few points below its 2008 high, despite the physical metal having made several new highs over the past few months. The chart below shows the action in the HUI over the same period as the gold chart above and clearly illustrates the volatility and leverage offered by gold stocks versus the underlying metal. 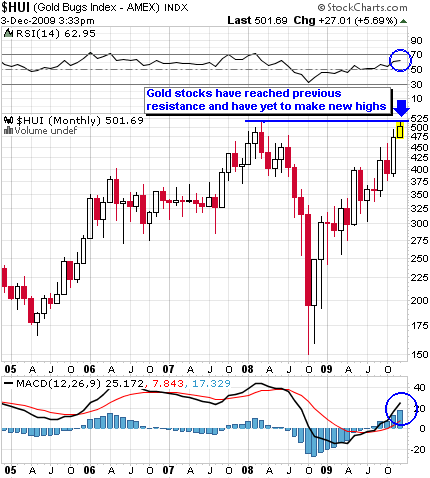 Some may interpret the inability of gold stocks to match gold’s advance as a bearish sign. Others simply view gold stocks as undervalued and likely to play catch up in the coming months. With silver also failing to make new record highs, the biggest opportunity might be in silver mining stocks. I am of the opinion that silver will catch up to gold at some point during 2010 and outpace the gains of its bigger brother by a wide margin. The stock situation is a bit trickier. Investors are turning toward physical metals and tangible assets as a hedge against the ills of fiat money and the dangers of paper promises, including stocks. A significant percentage of the world’s wealth was destroyed last year. While some were timely enough to buy at the bottom and recoup their losses, many have lost faith in Wall Street and are looking for safer assets in which to park their wealth.

Gold and silver stocks may continue to offer leverage to the underlying metal, but we may see this leverage decrease over time as the greatest leverage tends to occur during the beginning phases of the bull cycle. I also believe to what extent investors regain their risk appetite and how well the overall economy holds up will be defining factors. While a stock like Yamana Gold (AUY) is still up considerably more than gold since the start of 2002, the difference between the returns has narrowed following the market crash of 2008. This makes it more important than ever for investors to be extremely selective when determining which gold and silver stocks to add to their portfolios. This is exactly where the Gold Stock Bull Premium Membership can help, as our focus is on finding the quality junior explorers and near-term producers that have the greatest upside potential and leverage to the gold/silver price.

In summary, I believe we could see a short period of correction/consolidation and that gold should trade in the $1,100-$1,200 range during this time. However, we are only half way through the current upleg which should top out around $1,300. Furthermore, I think 2010 will see gold reach $1,600 or higher, so any dips along the way should be used as buying opportunities.

If you would like to keep updated on our sentiment towards the gold, silver, energy and agriculture markets, you should consider a premium membership. You will receive instant access to the Gold Stock Bull Portfolio, be able to follow when we are booking profits or adding to positions and receive the monthly contrarian newsletter. It is only $35 per month and you can cancel at anytime if you aren’t 100% satisfied. Click here to get started.