Debt Can Never Be Repaid (By Bankster Design)

You really have to hand it to the banksters. As was painstakingly detailed in the book Creature from Jekyll Island, the banking elite devised a brilliant plan in November of 1910 on Jekyll Island in which to take over control of the United States, steal the wealth from the taxpayers and the resources from the country.

It was at this meeting that the Federal Reserve was conceived by the banking cartel, as they devised a plan to protect its member banks from competition and convince Congress and the American public that this cartel was an agency of the United States government.

The creation of the Federal Reserve will undoubtedly go down as one of the biggest tragedies in American history. After all, the government handed over the right to print the nation’s currency AND charge interest to a private, for-profit corporation with unknown shareholders. The Federal Reserve was given the right to simply print massive sums of money out of thin air and then charge the American taxpayer interest on that money. 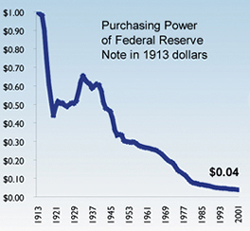 In essence what they did was place the American people into indentured servitude by forcing the people to pay usury on worthless fiat currency (paper money created out of nothing), not to fund the government, but to enrich the bankers and fund wars in which America should never be involved. It has led to the massive unsustainable debt situation and the dollar losing 96% of its purchasing power since 1913. Stop and reflect on that last statistic for a moment. $100 today buys you only 4% of the amount of good or services that it would have bought you in 1913. Or put another way, it would take $25 in today’s money to match what just $1 would have bought you in 1913. The rest of the value has been absorbed by the banking cartel and government. How on earth we still allow this institution to exist and operate in privacy is beyond comprehension.

Furthermore, It is absolutely unconstitutional, as Article 1, Section 8 of the Constitution clearly states that only Congress shall have the power to coin money. This view was confirmed in Lewis v. United States, 680 F.2d 1239 (1982), in which the 9th Circuit Court of Appeals ruled:

As the United States debt-to-GDP ratio approaches 100%, the interest owed on the debt has become one of the largest annual budget items. The total U.S. debt according to http://www.usdebtclock.org/ has reached $56 Trillion or $180,000 for every U.S. citizen. This figure does not even include unfunded liabilities such as Social Security and Medicare, off-balance-sheet liabilities such as Fannie and Freddie and other liabilities that put the true total debt well over $100 Trillion. But let’s just use the $56 Trillion number for now.

The Federal Reserve conveniently stopped printing the total money supply statistic (M3) back in 2006. But since that date, a number of statisticians have extrapolated the number and come up with estimates that are widely believed to be in the ballpark. Using these numbers, the total amount of U.S. money outstanding is approximately $14 Trillion. If you divide 14 Trillion by the U.S. population of 310 million people, there is approximately $45,000 for every US person.

So, if the debt per citizen is $180,000 ($56 Trillion / 310 million people) and there is only $45,000 per citizen in existence, how can the debt ever be paid off? Even if we use the more conservative estimate of debt which is total public and private debt, we get $29.5 Trillion, which is more than DOUBLE the amount of dollars in existence.

The answer is that the debt CAN NOT be paid off. In fact, this is specifically how the banksters designed the system, so that everyone would eventually be in debt and servitude to them. Think about just how maniacal that is for a moment. But it gets worse…

You see, the government has already pledged all of America’s gold, which is surely no longer at Fort Knox as they haven’t allowed an audit in over 50 years. Even if the gold is still there, it now only represents a fraction of the annual deficit, let alone the total debt. Furthermore, the government will eventually have to pledge what is left of America’s public land, buildings and natural resources, privatizing everything from the Grand Canyon to Manhattan to Yosemite National Park.

On the individual level, since there will never be enough money for everyone to pay back their home mortgages, this means the banks will end up foreclosing on a huge portion of the real estate and housing that hard-working Americans own, a process which has already begun. So not only will the banking elite end up with all of the money, they will also end up with all of the land and resources of the once great United States of America.

It is absolutely ridiculous that we have become so apathetic and brainwashed to be allowing this to happen right under our noses. This charade is going to end badly, either by default or hyperinflation and most likely with a high level of social unrest. Either way, the banksters have created a fiat money system that is absolutely destructive to this country, our freedoms and our way of life. If you are outraged, there are fortunately some things that you can do.

1) Move your money out of the big banks and into local community banks or non-profit credit unions. Because of fractional reserve banking, every dollar that you remove deprives the banks of $9 or more used for risky derivatives gambling where its heads they win, tails you lose.

2) Support a full audit of the Federal Reserve, sign the petition and write or call your local congressman. Voter action has already led to a partial one-time audit that recently passed the Senate, which is a good first step. But we need periodic full audits of exactly what the Fed is doing with taxpayer funds or better yet, the abolition of this entity. The more the awareness is raised about the Fed, the better chance we will have of eliminating this institution one day and returning the right to coin money to the Congress, interest free.

3) Get out of debt and live within your means. We’ve had it good for a very long time and have been able to live beyond our means due to the dollar’s status as world reserve currency and easy credit. Those days are coming to an end, so you should do everything within your means to get our of debt while interest rates are still low. They will need to shoot dramatically higher one day, and you don’t want to have an adjustable rate loan of any type when they do. Establish your freedom from the banks and deprive them of their revenue (interest on your debt).

4) Invest in precious metals. The government’s most likely response to the debt issue and slowing economy is going to be to print money on a scale the world has never seen before. This will undoubtedly lead to hyperinflation, destruction of the U.S. dollar and skyrocketing prices for gold and silver, real money. In addition, the banks and their government bed buddies hate gold because it is out of their control. They can’t print gold or silver out of thin air and it is a threat to their fiat currency system and their very power structure. You should consider owning physical gold and silver first (guide to buying physical) and if you are enjoying the leveraged gains provided by mining stocks, make sure to occasionally convert those paper profits into more physical metal stored outside of the banking system.

5) Lastly, continue to learn and share this information with as many people as possible. We can take our country back and end debt enslavement, but we have to move beyond the two-party system and stop bickering over marginal issues. Both parties are completely corrupt and in the pockets of the banksters and megacorporations. None of this will change until we eliminate the Fed and eliminate money from our political system. The mainstream media is not going to tell everyone this, because they are owned and funded by the banksters and elites. The information must spread via the Internet at a grassroots level.

To that end, here are a series of highly recommended documentaries covering the Federal Reserve, fiat money and our unsustainable debt crisis. Critical viewing.

If you would like to receive my monthly contrarian newsletter, view the Gold Stock Bull portfolio and receive email alerts whenever I am buying or selling, become a premium member today. You can try it out monthly at just $35 and cancel at anytime if you aren’t 100% satisfied. View the video introduction for more details or click here to get started now!