Gold Investors Can Profit from This Key Contrarian Indicator

The price of gold has been trounced the past few weeks, and most of the bulls have left the building. The price of gold has slid $175 since election night, but this pales in comparison to the amount of bulls heading for the exits. According to the Daily Sentiment Index, bullish sentiment on gold has dropped from 49% bulls one month ago, to 6% as of Friday’s close. What’s even more significant is that sentiment has only been this pessimistic one other time in the past 30 years. This occurred between September 8th 2014, and October 6th, 2014, and returns were strong following the signal. While this did not mark the absolute bottom for gold, it did provide a 10-day return of 6%, and a 3-month return of nearly 9%.

We are currently tied for the 30-year record for bullish sentiment under 15%, and a close under 15% bulls Monday will mark a new record. In my opinion, this is a very strong contrarian buy signal for gold investors. Out of nearly 6000 trading days the past 30 years, this is the most pessimistic futures traders have ever been on the metal. The 21-day moving average for bullish sentiment on gold was 9.8% during the previous record, and currently we have a 21-day moving average reading 9.76% on bullish sentiment. This means essentially that are more than 9 bears to every bull over the past 21 days for gold.

So what is the best way to play this potentially unprecedented signal? Here are two ways to play the extreme pessimism in the gold market:

1) Go long gold at current oversold levels with a stop on this trade at $1,130 / oz. As we can see from the below chart of gold with the MACD included, the metal is extremely oversold at current levels. While this does not mean the bottom is in, similar readings over the past year have marked bottoms for the metal. You can go long bullion, purchase a gold ETF or build a portfolio of quality mining stocks. Click here to view the Gold Stock Bull portfolio in real time. 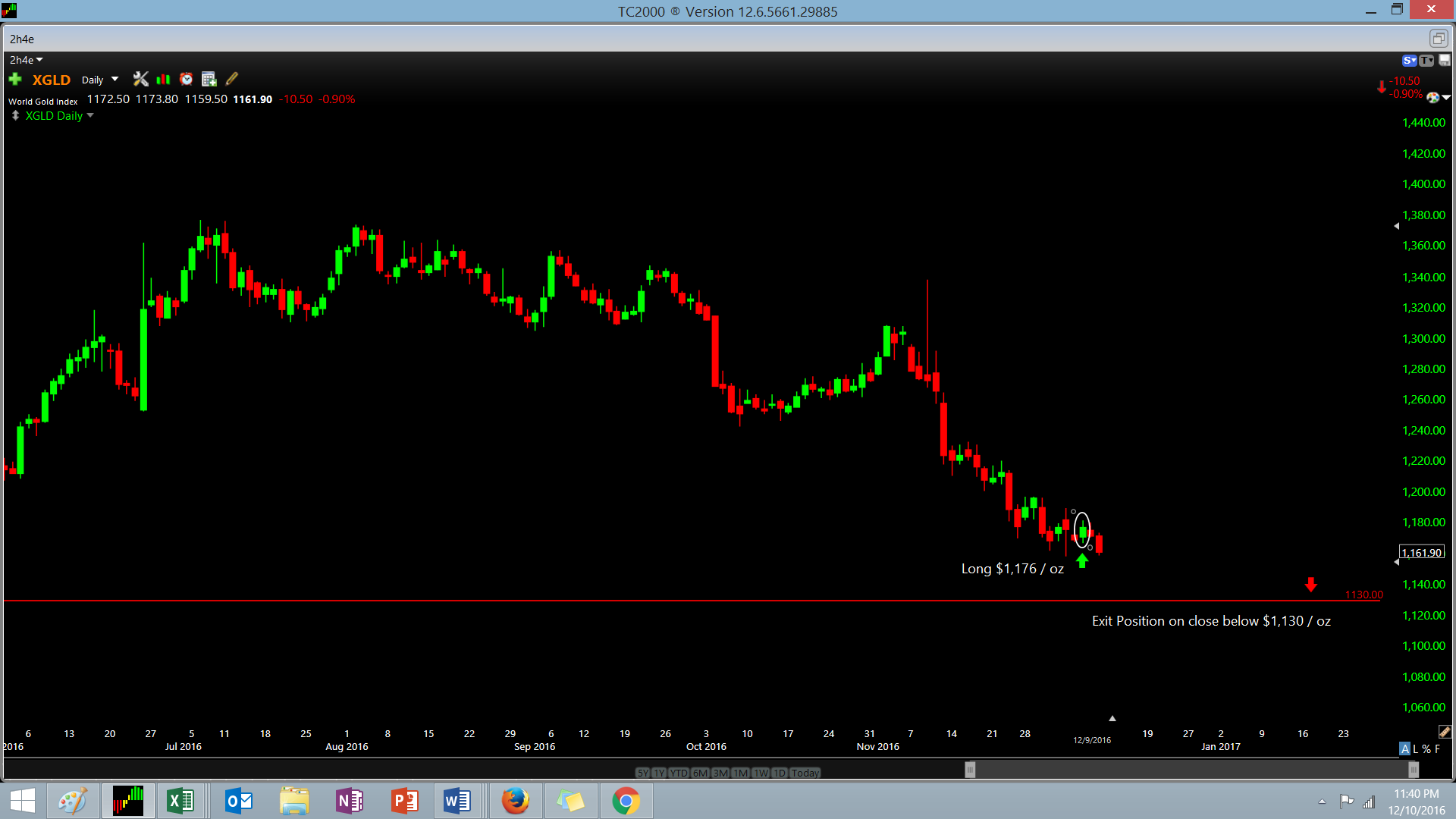 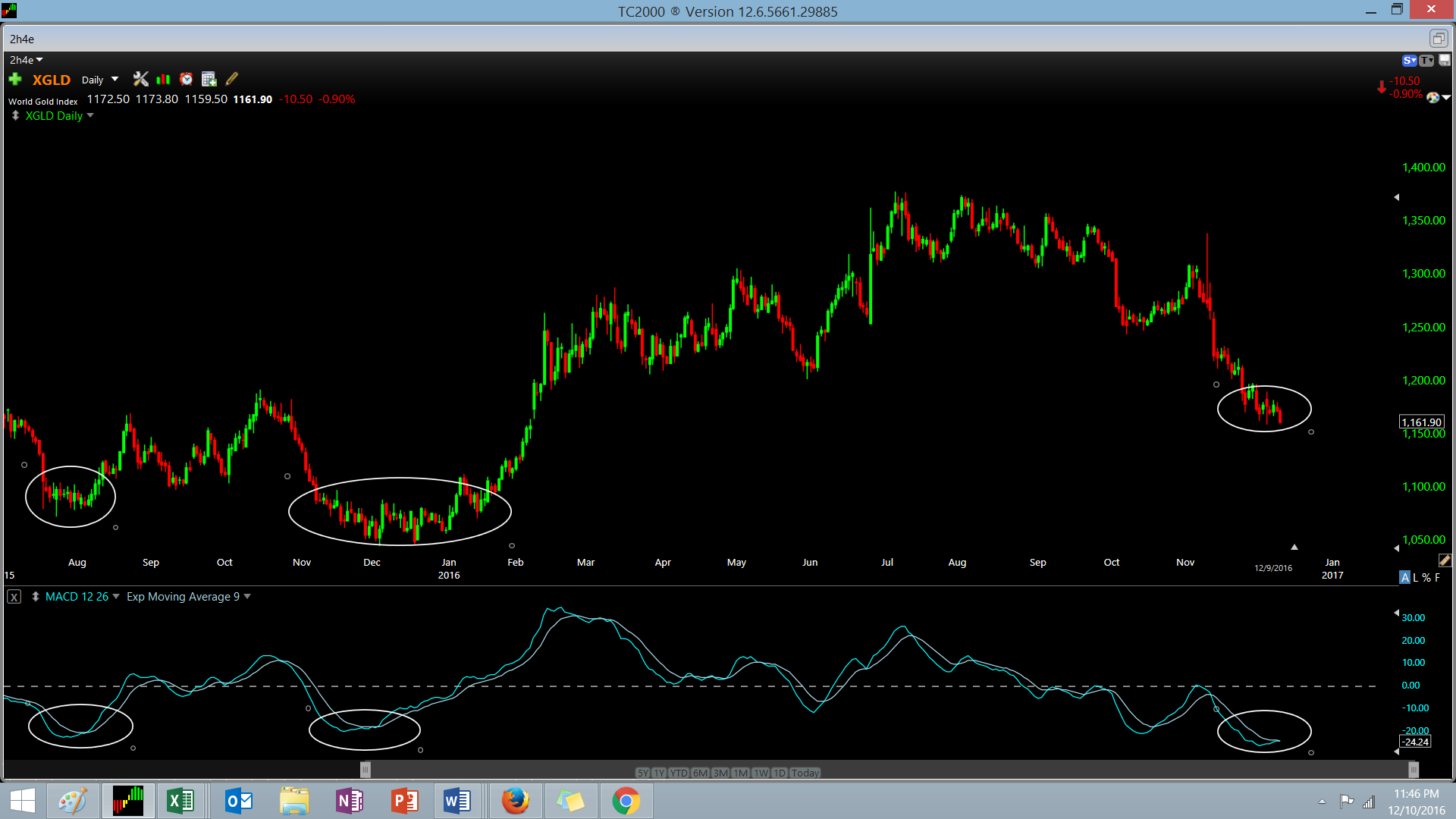 2) Open a short position against DGLD, a 3x Inverse Gold ETF. By shorting a triple inverse ETF, you are assuming a positive position on gold (or going long).

Inverse ETF’s decay over time due to different hidden fees, one of which is management fees. I have done different studies on DGLD, and it is the safest way to be long gold in my opinion. Based on the past 3 years for DGLD, the average annualized decay on the ETF is 10.04%. This means that assuming the price of return of gold returns 0.00% over a given year, the ETF would fall by 10.04%. By shorting DGLD, investors can make a lot of money if gold goes higher, but are protected on the downside if gold does go down. Investors will need a margin account to participate in this trade, as shorting is not allowed in most regular investment accounts.

As we can see from the above spreadsheet, gold has dropped over 6% between the second week of December, 2013 to the first week of December, 2016. The implied return on a 3x ETF that is short gold would be 18.42%. Instead of seeing a positive return of over 18%, the ETF has lost over 18% over the same time period. This means that the return of the ETF has a difference of 36.49% from its implied return to its actual return.

Since the second week of December, 2014, and the second week of December, 2016, the price of gold has dropped from $1,222 / oz to $1,162 / oz. Given that DGLD is a 3x inverse ETF, one would expect to have seen a positive return on their DGLD position. Due to the decay in the ETF, those who went long DGLD in December would instead be sitting on a 10% loss. This is extremely frustrating for investors who do not understand how these instruments work. Despite being able to correctly predict that gold would be lower, they are actually down on their position. The implied return over the past 2 years is 14.79% for investors, but instead investors are down 9.78%.

Shorting 3x inverse ETF’s is a very dangerous game if you are not willing to hold the position long enough to let the decay exploit itself. My DGLD position will be held for a minimum of 4 years and up to 7 years. Given the 10.04% average annualized decay on DGLD, this means that DGLD should see a 40% plus decay by December of 2020. What this means is that as long as the price of gold is above $1,005 / oz by December 2020, the trade will be profitable. The longer I choose to hold my position, the less risk I have on the position. Over a 7 year time period, the position will decay by nearly 71%. In order for the ETF to stay at the same price as today, the price of gold would have to drop by at least 23.4% (71

Over a 7 year period, as long as the price of gold is above $889 / oz, investors would see a gain on their position.

There are very large risks when it comes to shorting:

1) Margin Calls: A margin call is a demand made by a broker to deposit further cash to cover potential losses. Shorting carries the possibility of unlimited risk, and due to this I position size carefully. I currently have a position size of 7% of my account for this DGLD trade, and it would be extremely risky to use a DGLD size of more than 10% for this trade. While I am holding the position for 3-5 years most likely, there is the possibility that this position could be down 100% or more before the decay exploits itself. Due to this risk, I want to use a position size that allows me to weather any potential storms.

2) Borrowing Fees: Many brokers such as Interactive Broker charge borrowing fees when an investor shorts a security. The current annual borrow fee to be short DGLD is just over 2%. This is very reasonable considering that the ETF decays at a rate of nearly 5 times this rate each year.

3) Unlimited Losses: The other dangerous part about shorting securities is unlimited losses. While a long position can technically only lose 100% of its value, a short position can lose more than 100%. This is because there is no ceiling for short positions, whereas long positions cannot go any lower than zero. This is why investors should be careful with their position sizing, and never use a position size of more than 10%.

I do not believe we will see the price of gold even crack the $1,000 / oz level, as the majority of production is in the $950 / oz – $1,050 / oz range. A drop below the $1,000 / oz level on gold would take most gold producers out of the black, and cause them to curtail their mining output. This would be the equivalent of seeing crude oil below $30 / barrel, and we know from January of this year that this dip was very short-lived.

For those looking to get long gold at these levels, I believe a great hedge on their investment is to short DGLD at these levels. While it is very possible to be down significantly on the position over a short time period if gold continues lower, the risk is very low for any time period over 12 months. As long as gold closes above $1,130 / oz at this point next year, investors would be sitting on a gain. This gives a $30 / oz discount on the price of gold for each year that investors hold DGLD short.

Given the despondent sentiment in the gold space currently, I believe the odds are significantly in the bulls’ favor. I would not be surprised to see gold regain the $1,200 / oz level, and expect shorts will scramble to cover if this happens. The worst for gold is over in my opinion, with everyone looking at downside targets of $1,050 / oz to $1,000 / oz. When everyone was looking for $1,400 / oz to $1,600 / oz in August, this was the time to be cautious. Currently it’s hard to find anyone with even a $1,300 / oz target, and in my opinion now is the time to begin nibbling on gold positions.

I believe the safest way to get long gold is by shorting a decaying ETF, and DGLD is a perfect vehicle for this. I am short DGLD and intend to hold my position regardless of what gold does in the near term. My goal is to allow the decay to exploit itself, in order to reap the maximum rewards from my position. While this does not mean I won’t take partial profits on the ETF if gold moves higher, I plan to hold my core position for at least three years.

Get the Gold Stock Bull newsletter, portfolio and trade alerts by clicking here.

About the Author: Taylor Dart

Taylor has over 10 years of experience in active investing with a compound annual growth rate of 19 percent per year. His main focus is on undervalued growth stocks outperforming the market and their peers. In addition he use extensive technical analysis to capture maximum upside price action, as his belief is that timing is everything. Taylor scans upwards of 1200 stocks nightly on the U.S. and Canadian markets to identify the best fundamental opportunities with the most timely technical setups. He is a huge proponent of trend following.