Republicans were forced to pull their bill to replace Obamacare from the floor of the GOP-controlled House today, lacking sufficient support. This has helped to push gold higher, but technical resistance has held thus far.

Gold has been in rally mode lately after a v-shaped correction and recovery during the month of March. In the first week of the month, gold declined and closed lower for six straight days. But it bottomed around support at $1,200 and has since notched six straight days of gains (hollow candles on the chart). This also marks the second weekly gain for gold. 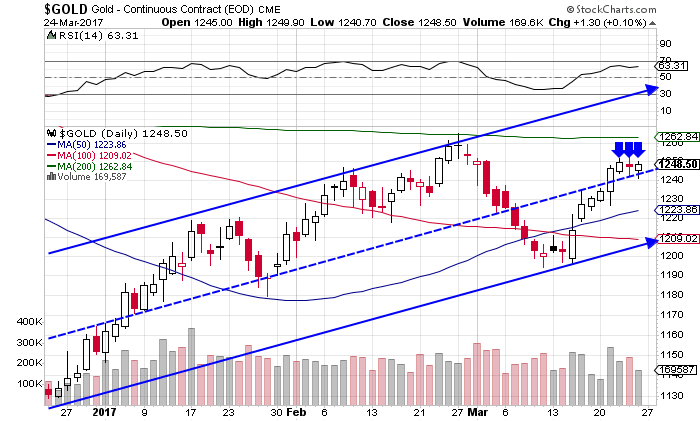 The gold price remains in an uptrend at roughly the middle mark of the trend channel. Gold bulls need to see the price close above $1,250 and then climb above the 2017 high and 200-day moving average just above $1,260. This would indicate that the price is ready to start moving higher once again and give a green light to increase exposure.

It is interesting to note that gold has made three separate attempts to close above $1,250 and was denied each time.  The Kitco 3-day chart helps to illustrate just how powerfully the $1,250 level has been defended. Each attempt to climb above $1,250 was met with selling pressure and a sharp decline that completely wiped out the prior gain.

If there is a concerted effort by paper shorts to hold the price below $1,250, they will probably succeed in doing so through next week when gold futures and options expire. So, I will be looking for price consolidation and a bit of a pullback in the coming days, followed by a breakout in early April.

Gold’s recent move higher has been driven partly by doubts about the ability of U.S. President Donald Trump to push legislation through Congress for healthcare and tax reform. This news pushed the dollar to seven-week lows. Importantly, the USD index has once gain fallen below the important 100 level. 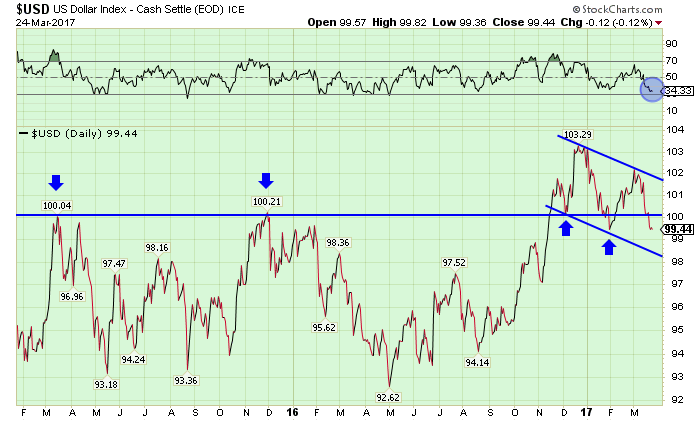 I will be looking for the USD index to make a new lower 2017 low in the weeks ahead, which would confirm a new downtrend. The RSI momentum indicator is nearing oversold levels though, so we could see a near-term bounce. Either way, it is starting to look like the [email protected] 2016 USD rally may be coming to an end. Everyone has been long the dollar, so as a contrarian I am not surprised to see the rally fizzle.

Republicans were forced to pull their bill to replace Obamacare from the floor of the GOP-controlled House today, lacking sufficient support.In an 11th hour move, with under a half hour before the House was set to vote, President Trump asked House leaders to cancel today’s vote. There is plenty of finger-pointing and bickering as not a single Democrat crossed the aisle to support the repeal.

The more important implication is the fact that without repealing Obamacare, President Trump’s promise of major tax reform becomes much less likely. The two pieces of legislation are interwoven and it will be nearly impossible for Trump to overhaul the tax system without also overhauling healthcare.

This comes after a sharp drop in the stock market earlier in the week, that some believe is a sign of things to come. If Trump in unable to live up to his campaign pledges, then the market will need to correct from the false Trump rally. This implies lower stock prices and higher gold prices ahead.

We are monitoring key pivot points in the gold and silver price for our subscribers and awaiting the proper signal to add to our positions. There are a number of junior gold and silver miners that are oversold and undervalued at current levels. Recent high-grade intercepts have gone unappreciated by a market in consolidation mode, but this will change soon. Get all of our picks, full portfolio, trade alerts, monthly newsletter and more by signing up here.