A Fed Rate Hike at the Wrong Time Could Spell Disaster

For the first time in ten years, the Fed has recently begun reducing its balance sheet. It has also been raising interest rates. This is a complete turnaround from nearly a decade’s worth of printing money (also known as quantitative easing or QE) and enacting Zero Interest Rate Policy (ZIRP) to boost the economy. The current bull market in stocks is now the longest in history. But when you add the escalating trade war and possibility that the Fed hikes rates too fast, you get a recipe for uncertainty ahead.

Tightening monetary policy has also been a factor in the fall in gold prices as measured in USD. The dollar is sitting near a one-year high. If rates do not continue to rise as the market expects, this will likely drag down the USD index, which will, in turn, support the price of gold. There is resistance on the chart at the current level and again around the 100 level for dollar. The RSI is pointed lower with room to continue dropping before becoming oversold. 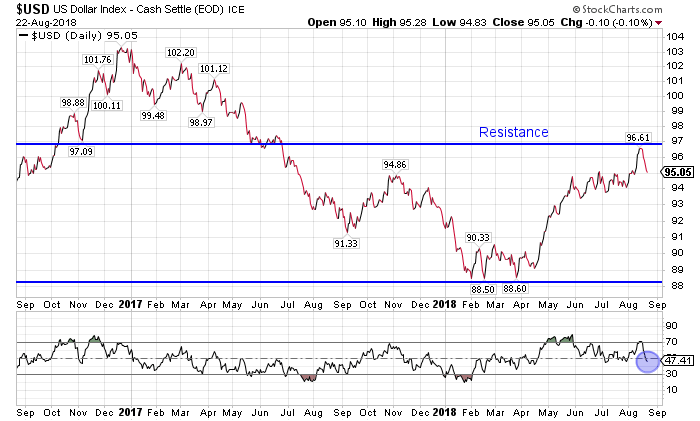 The odds of impeachment increased significantly over the past few days with the convictions of two close associates of President Donald Trump. Former Trump campaign chairman Paul Manafort and the President’s former fixer Michael Cohen could be facing jail time and implicate the President, taking him down with them. This could send shockwaves throughout financial markets, as Trump’s tax cuts are largely credited with the latest rally to new highs for stocks.

On the political prediction market PredictIt, the price on Trump being impeached rose five points, to 45 cents. The site allows users to buy “shares” and if the outcome comes true, all those who brought yes shares will get $1 back per share. The shares on Trump’s impeachment have not closed at a price that high in at least three months.

President Trump recently criticized the Federal Reserve for their rate hikes, hoping for their assistance in keeping the economy chugging along. But the FED is very touchy about their independence and they are likely to ignore Twitter demands from the President. Central banks have been known to make bad decisions at key moments in history and they are likely over-estimating the true strength of the economy.

In the past, the Fed has repeatedly had to go back on its word with regard to raising rates. Particularly during the years of 2014 – 2015, there were too many Fed rate hike fake outs to count. Each time the Fed promised a rate hike, they wound up doing nothing. This finally ended in December of 2015, at which point the Fed would have lost all credibility if they didn’t raise rates by 25 basis points.

Rate hikes were widely expected to continue on a regular basis into 2016. They didn’t. Instead, there was only a single rate hike during Q4 2016. This brought the Fed Funds Rate to 0.75%.

In 2017, rates were raised by 25 basis points in March, June, and December. Increases of the same magnitude have been observed so far in both quarters of 2018.

The Fed has finally begun to make good on its word. But for how long?

If the Fed continues on its current rate hike schedule, it risks throwing the US economy into a tailspin (it has already thrown other national economies into turmoil, e.g., Turkey). The Fed has repeatedly cited this possibility as a chief reason for remaining hesitant in raising rates and for raising them so slowly. And now, with the added complication of an escalating trade war, it would make sense if the Fed halted their rate hikes for some time.

But if history is any guide, the Fed is likely to do the exact opposite of what makes sense.

The Federal Reserve Admits It Caused the Great Depression

In 1928 and 1929, under the guidance of Fed Chair Roy A. Young, the Fed raised interest rates. This action, in effect, pricked the bubble of the roaring twenties and led to a series of cascading catastrophes throughout the world that led to the great depression.

Former Fed chairs Paul Volcker, Alan Greenspan, and Ben Bernanke have all admitted this reality, as documented by FederalReserveHistory.org.

“Regarding the Great Depression, … we did it. We’re very sorry. … We won’t do it again.” Ben Bernanke, November 8, 2002, in a speech given at “A Conference to Honor Milton Friedman … On the Occasion of His 90th Birthday.”

It’s worth asking the question…are they doing it again?

No matter how slowly the Fed raises rates, chances are they will wind up raising them too fast. There’s too much debt in the system. Higher rates are not sustainable. Even President Trump seems to understand this:

….The United States should not be penalized because we are doing so well. Tightening now hurts all that we have done. The U.S. should be allowed to recapture what was lost due to illegal currency manipulation and BAD Trade Deals. Debt coming due & we are raising rates – Really?

While the recent remarks of Dallas Fed Chair Robert S. Kaplan have been hawkish, the newly-released Fed minutes take a much more cautious tone overall. This kind of ambiguity is typical of the Fed and makes forecasting their next move difficult, to say the least. Even amidst profound political circumstances, it’s uncertain what they will do next.

What Would Impeachment Mean for a Fed Rate Hike?

To answer this question, we can look to the only two historical examples we have: Nixon and Clinton.

Both times resulted in financial markets tanking.  Still, the outcomes were very different.

The Watergate scandal coincided with a massive correction in stocks coupled with excessive inflation.

In the late 90s, the impeachment and subsequent Senate acquittal of Clinton led to stock markets regaining their losses and even setting new all-time highs.

These events do not happen in a vacuum, however.

The Nixon administration was mired in a bear market, to begin with, and the Clinton administration was in the midst of the dot-com bubble of the late 90s. So, while the mere possibility of impeachment can roil markets, it’s not necessarily a “black swan” type of event.

In addition, some market observers believe a President Pence would actually be better for the economy. All things considered impeachment today might not be such a bad thing after the initial shock.

How to Position Your Portfolio

Trump’s criticism of the Federal Reserve hiking rates means will probably have little impact on FED policy. They will likely continue hiking rates until markets finally crash. By any number of measures, the stock market is overvalued and overdue for a major correction. With the FED tightening, escalating trade wars and the increasingly odds of impeachment, we believe this is a good time to reduce risk and increase exposure to safe-haven assets. Gold, silver, mining stocks and cryptocurrencies are all offering value to investors, after correcting sharply throughout most of 2018. As contrarian investors, we are looking to short the stock market and go long the asset classes currently facing extreme negative sentiment. Follow our trades here.