The Connection Between Economic Crisis and Cryptocurrency

Out of all the mainstream hysteria about crypto that we have heard in 2017, one question of the utmost importance often goes unasked: why now, and what is happening to fiat currency?

Bitcoin has existed since 2009.  There have been many ups and downs between then and now.  But nothing like what 2017 brought.  The total market cap of all coins came in at under ten billion USD for most of that time.  Today it is over half a trillion, and will almost definitely exceed the trillion-dollar mark sometime in 2018.

So, what has caused this massive explosion?  Has it just been a result of more media coverage leading to greater awareness?  Or is the whole thing a fraud, as some banker types would like the world to believe?

The reasons are legion.  One can’t necessarily pinpoint any exact causal factor.  Reality is often more complex, involving many variables.  That being said, sometimes a single variable stands out above the rest as having a massively more significant influence than everything else combined.

The inevitable and predictable devaluation of fiat currency

The rise of cryptocurrency is not surprising to those who understand both the basics of the technology and elementary economics.  It’s simply the result of fiat currencies collapsing against the fixed supply of cryptographic coins.  This is happening to the world as a whole.  Yet it’s happening in some places faster than others.  In a moment, we will zero in on Venezuela, a country where the reality of all this has become painfully apparent.

One of the few prominent people with a voice in mainstream media who understand this concept is cybersecurity expert John McAfee.  He has a way of expressing the simplicity and significance of the crypto revolution.  It’s a good thing to have someone like him making public statements to counter those of bankers, regulators, and Jim Cramer’s.

Before the invention of agriculture, he notes, people thought only of how to most efficiently move from place to place as they depleted natural resources.  But with agriculture, the people stopped moving.  They could now remain in a fixed location indefinitely.  The consequences of this were undoubtedly difficult for some to comprehend in the beginning, just as people struggle to understand what’s happening to fiat currency right now.  The result was a complete and total paradigm shift:

“Likewise, what people see as a bitcoin “bubble,” from the
perspective of the new paradigm, is merely the predictable and
systematic devaluation of fiat currencies that will continue,
with obvious ups and downs, until all fiat currencies reach the
zero point.

As the relative value of bitcoin temporarily drops, they will
point to this as proof of their understanding. It won’t matter.
The reality is this new world is what it is. Those who understand
will be the leaders of this new world.”

An understanding of sadness

No one understands all of this better than citizens of Venezuela.  Venezuela is in the midst of a horrific economic collapse.  The Venezuelan Bolivar has entered a hyperinflationary death-spiral, as every fiat currency does at some point.

The following charts serve as a helpful visual demonstration of this crisis.  Here we see the value of the Venezuelan Bolivar relative to the world’s reserve currency, the US dollar: 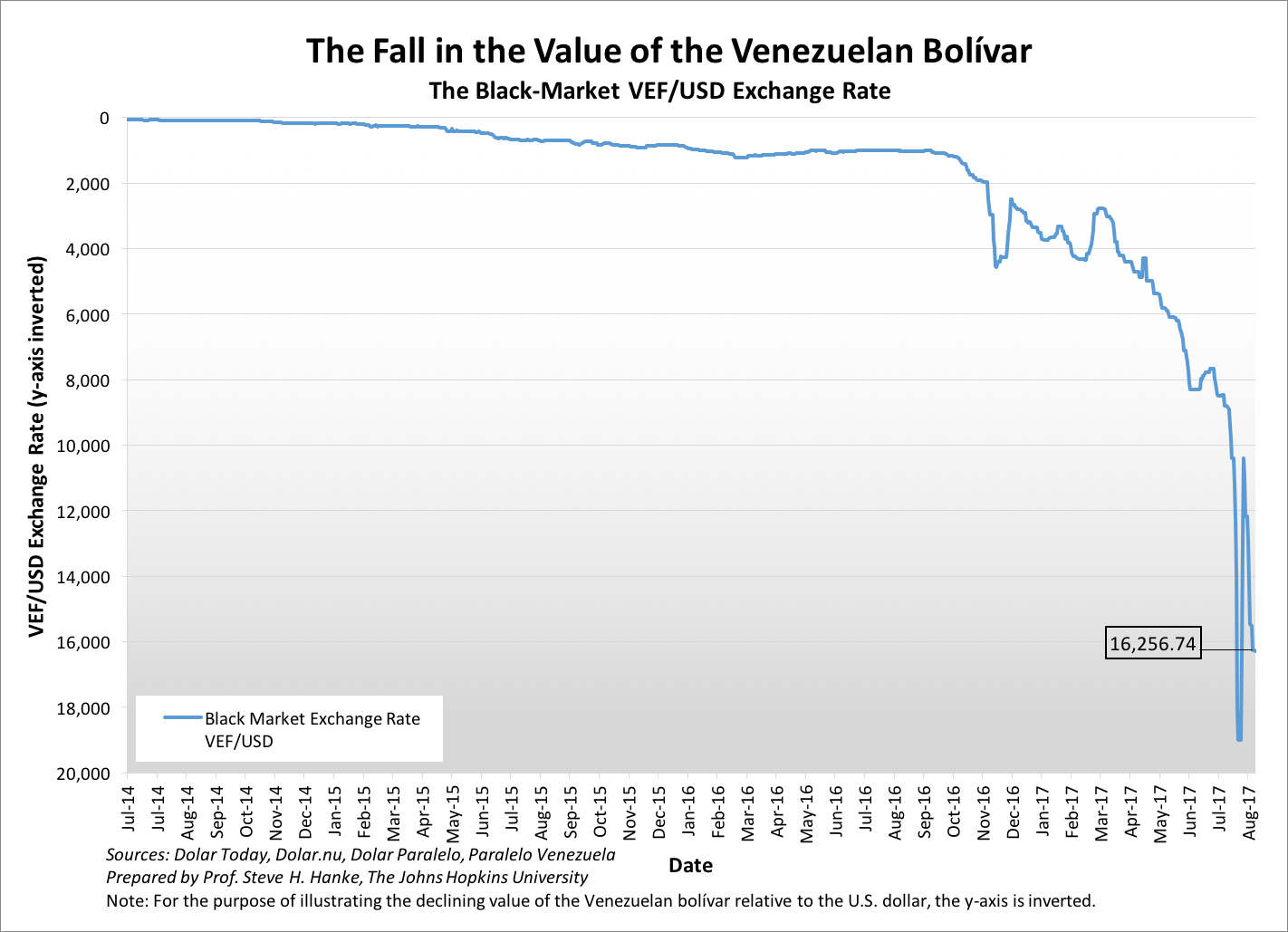 The inverse of the Bolivar’s relative value is the rate of inflation: 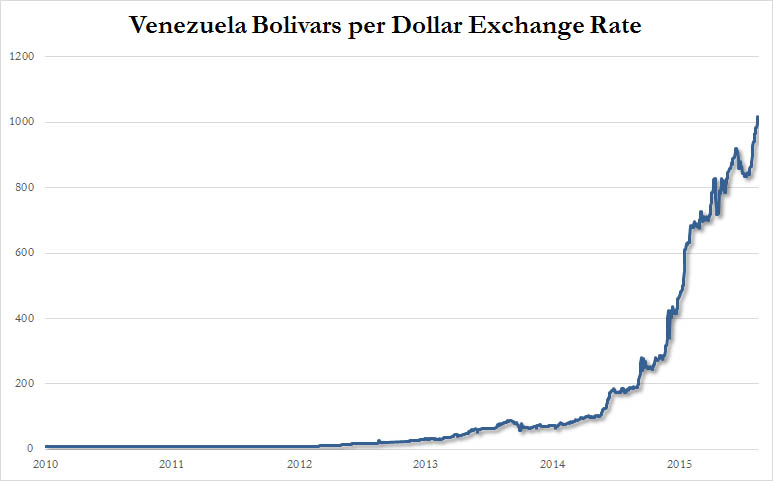 And finally, take a look at the weekly Local Bitcoins volume chart in Venezuela courtesy of coin.dance: 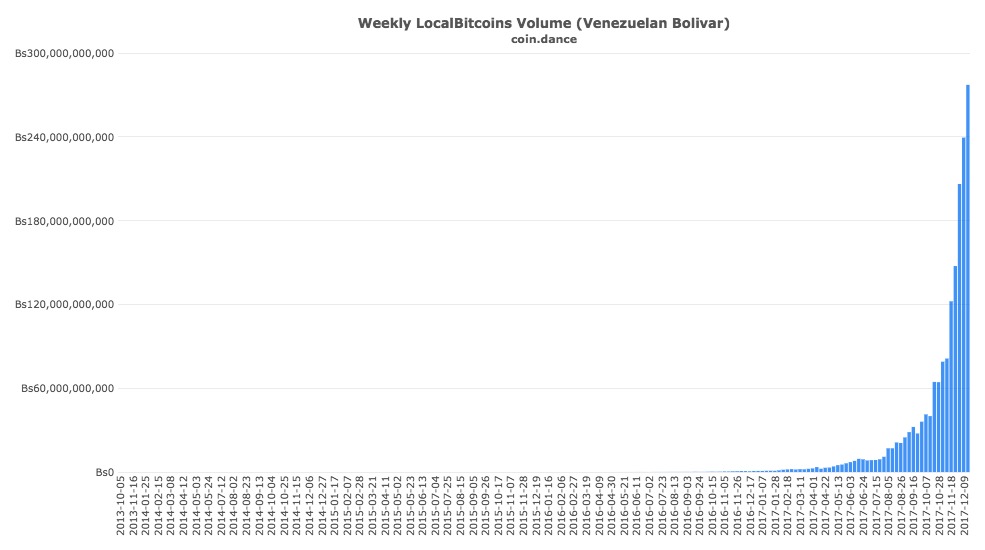 It’s clear that people in Venezuela are not using bitcoin as a speculative investment or even as an attempt to establish a new decentralized monetary system.  Their motivation comes down to survival.

As The Washington Post Reports in a recent piece entitled “How Hyperinflation Stole Christmas in Venezuela”, a pair of imitation Converse sneakers costs half a million of the local fiat currency this year.

“They were the cheapest in the store, but the Converse knockoffs were still 500,000 bolívars a pair. “Son locos” — they’re crazy — Viviana Acosta had said, gingerly placing the sneakers back on the shelf.”

“Just before Christmas, the world’s worst inflation crisis in nearly a decade was escalating — bringing a country of nearly 32 million, once Latin America’s richest per capita, to its knees. Shoes for the kids had been Viviana’s plan for the holidays. But multiply by three — for two daughters and one son — and it was three months’ worth of what she earned doing house-call hair and nails.”

Those unfamiliar with the crisis in Venezuela may find it worthwhile to research the topic to the extent they can.  It serves as a ghost of Christmas future for what will soon be occurring in all nations dominated by central bank-issued debt-based fiat currency.

But the world need not despair.  Satoshi Nakamoto is like Santa on steroids.  Cryptocurrency offers an alternative to the oppressive fiat currency system set up by central banks.  Just watch the following one-minute videos:

Many other countries face similar crises.  Just take a look at this list of 25 countries that have experienced hyperinflation in the last 25 years, courtesy of Munknee.com.  Crises like these have been the biggest factor fueling the fanatical rise in crypto market caps.

Of course, mining for coins after a fiat currency collapse is not ideal.  If we switch to crypto as a collective beforehand, we can escape the fate of Venezuela and the dozens of other nations that have experienced similar crises in recent years.

In short, listen to the ghost of Christmas future.  Central bank, fractional reserve, fiat currency is on the way out. Start using cryptocurrency as both a store of value and medium of exchange while you still can.

Get our top cryptocurrency picks, ICO research and ratings, model portfolio, trade alerts, monthly newsletter and more by subscribing to the premium membership!