Financial Impact of Midterm Elections: Do the Markets Really Care About the Results?

In the midterm elections that took place on Tuesday, November 6th, 2018, Democrats took control of the House of Representatives while Republicans expanded their majority in the Senate.

While this outcome was to be expected, the financial impact of the midterm elections has been less clear.

Stocks initially rallied following the election only to sink on Friday. What do the experts have to say about where we are headed next?

Financial Impact of Midterm Elections According to the Experts

Business Insider compiled the opinions of some notable names in the financial world. There’s not a lot of common consensus so far as the financial impact of the midterm elections goes, but some see the new Democratic control of the House of Representatives as a positive:

“A Democratic majority in the House could work to slow deregulation in the financial services sector. In particular, it would reduce the prospect of legislation rolling back parts of the Dodd-Frank act, which has constrained the industry in the wake of the 2008 financial crisis. Despite this, we still believe there is scope for optimism about the sector, with financials benefiting from rising rates and low percentages of loan default. US industrials could receive less support.” – Justin Waring, investment strategist at UBS Financial Services

Some pundits seem to think that there is no clear-cut way to interpret the impact of the mid-term elections on the markets:

“it’s not clear that midterm results will have a predictable impact on the market.” Simon Moore, Forbes

“…the midterms are unlikely to have a significant impact on the economy.” –Nikhil Sanghani, assistant economist at Capital Economics

Others view a split congress as decreasing the likelihood of any significant impact on some specific markets like healthcare, which can be a positive thing:

“Our Health Care analysts have viewed a split Congress as the most positive outcome for their sector, since no major legislation would likely be enacted.” – Bank of America Merill Lynch

At Gold Stock Bull, our view is that the split House will slow President Trump’s pro-market reforms, which is likely to hurt the economy and lead to lower stock prices. The Democrats are likely to push for wage controls, higher taxes and increased deficit spending. If they push for impeachment, this is also likely to rattle markets and lead to increased volatility and downside momentum.

There is some historical evidence to suggest that a change in leadership in the House can dampen overall stock market returns, however:

Still, Nobel Prize-winning economist Robert Shiller told CNBC that he believes this time could be different due to the unique circumstances surrounding the current administration and global economic conditions.

Past performance of the financial impact of midterm elections isn’t always indicative of future results, he argues.

He cites the possibility of impeachment as a potential wildcard that could send markets lower.

The Possibility of Impeachment and Financial Impact of Midterm Elections

The prospect of the president being impeached sounds like something that might rattle markets. And Mr. Shiller’s opinion certainly carries weight.

Yet other market observers note that just the opposite can be true.

Paul Eitelman, a strategist at Russell Investments, has noted that the possibility of impeachment might not weigh as heavily on the markets as it might seem natural to assume.

Using the historical example of Bill Clinton in December of 1998, he points out that markets rallied during this time after hitting a bottom the previous fall.

In the end, no one can say for sure what the financial impact of midterm election results will have on financial markets. There may be little to no impact at all.

In the long run, however, fundamentals matter. And these days, price-to-earnings ratios are off the charts, corporations are buying back their own stocks by the bundle, and high-frequency trading algorithms rule the vast majority of stock trading. Any financial impact of the midterm elections could be easily reversed with a single Federal Reserve meeting.

Central banks function independently of elected officials and their mandates regarding monetary policy supersede everything that the legislative, judicial, and executive branches do. Even the president can offer only rhetoric in an attempt to put pressure on a central bank to act in accordance with his will.

This begs the question: is the president of the USA really the most powerful individual in the world?

And if that question is worth asking, it’s also worthwhile to consider the true financial impact of midterm elections on immediate market realities.

Stocks resumed their slide on Monday, with the Dow cratering a whopping 602 points. All the major US indexes were down 2% or more, with the VIX jumping up by 17.8%. The S&P 500 fell 2% to 2,726. Early morning gains on Tuesday have largely been wiped out heading into mid-day trading. Note that the S&P 500 index remains below the key support trend line and below the 100-day and 200-day moving averages. 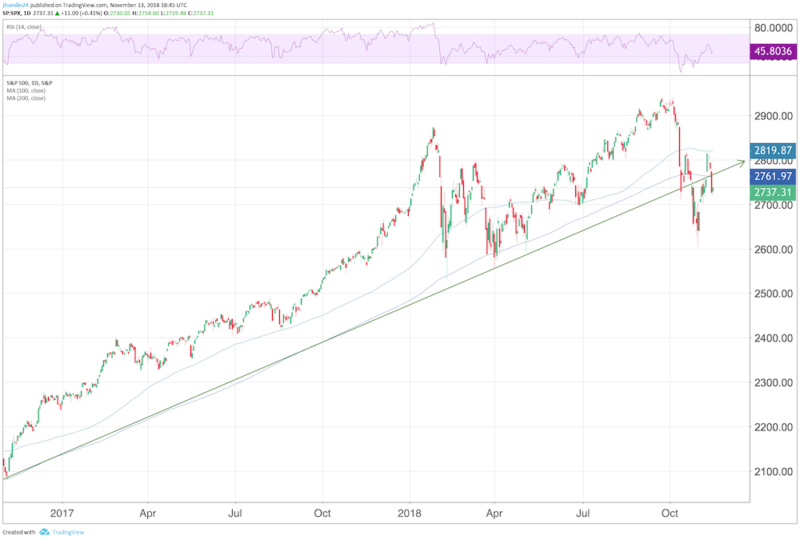 This selloff is being blamed on a strong dollar more than anything else. The USD index is sitting at a 17-month high. While we’ve covered how this is contributing to the devaluation of other fiat currencies abroad, it’s also a factor here at home.

“[a strong dollar] could be a challenge for the stock market in the fact that about 40 percent of the S&P 500 earnings are generated from outside the United States,” said Michael Arone, chief investment strategist at State Street Global Advisors. “As the dollar strengthens, that has certainly created risk to those earnings.”

The USD chart shows the trend reversal that occurred in early 2018 and powerful rally that has followed. The chart is bullish, but the dollar is at the top end of its trend channel with plenty of room to drop. We see support in the 94 to 95 range. A drop below this would be bearish for the dollar and a drop below the support trend line around 92 would signal a bearish reversal. But for now, the trend remains to the upside as the Federal Reserve continues raising interest rates. 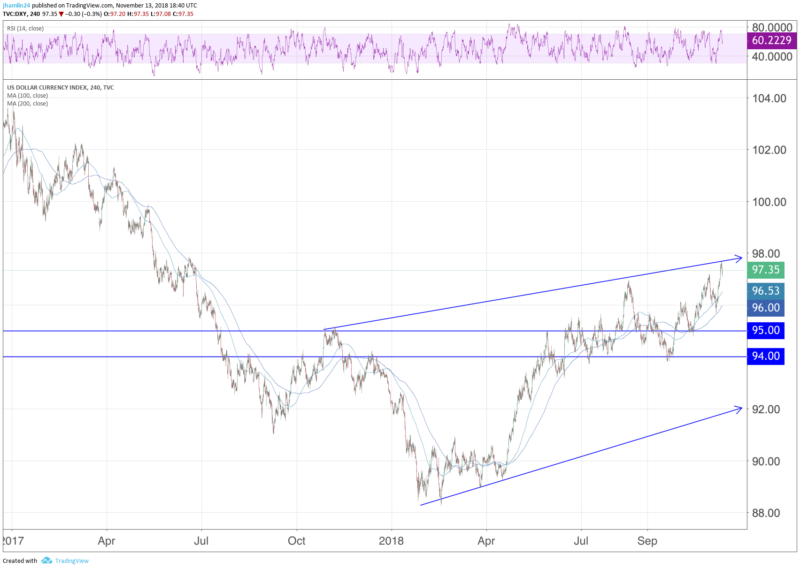 While last week saw stocks rally, this may have only been due to a drop in the price of crude oil coupled with widespread sentiment that each dip should be seen as a buying opportunity (after all, it has been the case for the last ten years or so). If selling continues into this week, it will further cement the idea that last week’s buying frenzy was nothing more than a dead-cat bounce.

Each time we see increasing volatility and a failure of markets to gain back previous losses, it increases the likelihood that this is not an isolated incident.

We are so long overdue for a downturn, there has been so much liquidity pumped into the system over the last decade, and debt to GDP ratios have gotten so out of control that it’s hard to imagine the tremors we’re experiencing today aren’t foreshocks to a larger catastrophe on the horizon.

It’s never wise to discount the potential impact of mother nature on markets. Given that a significant portion of global GDP is related in some way to the extraction and refinement of natural resources, disruptions of nature necessitate disruptions of markets if the scale is large enough. The California “Camp Fire’ is now the deadliest and most destructive in state history!

For now, the massive wildfire catastrophes in California cannot be directly tied to Monday’s stock selloff. But it’s interesting to note that stocks had somewhat of a “sucker’s rally” or dead-cat bounce before the fires only to resume sinking into oblivion as the blazes have now shown their full brutality.

While California wildfires like the Woolsey fire have begun to be contained somewhat as of Monday morning, deficit spending has become an inferno that neither party seems willing or able to put out.

A 747 Global Airtanker makes a drop in front of advancing flames from a wildfire Thursday, Aug. 2, 2018, in Lakeport, Calif. (Kent Porter /The Press Democrat via AP)

Amazing footage of the California fires. 💔 This is so sad! pic.twitter.com/mdz70HRSRH

Will a Democratic House Shrink the Deficit or Address the Debt Problem?

While the federal government and its deficit spending expanded dramatically under the Obama administration, this trend has only increased with the Trump administration. Conservatives claim to want to shrink the overall size of government, but modern Republicans appear to be doing the exact opposite.

Growing government while also cutting corporate tax rates serves to grow deficits at blinding speed. And there’s evidence that those increased corporate profits went to one place – corporate stock buybacks. Could it be that corporate insiders have been selling their shares in bulk whenever there is a rally, after having pumped the price?

Will the new shift in power alter the current financial landscape? Or are there problems here that transcend political ideation?

Investors continue to be worried about the trade war with China, Fed tightening and a slowdown in economic activity in China. But the 600-lb gorilla in the room is the growing debt problem.

This week, financial institutions expressed concerns towards rising US debt levels, officially reaching towards $22 trillion. The U.S. Debt-to-GDP ratio is up from 30% in the 70’s to over 100 today. It will be approaching all-time highs over the next few years and this will be a major drag on economic growth and stock prices.

At Gold Stock Bull, we believe it is important to hedge your long exposure at times like these. We have a number of short positions against stocks that we believe are overvalued and likely to lead the markets lower. We also have long exposure to non-correlated assets such as precious metals and cryptocurrencies, which we believe will move higher as investors flee overvalued equity, bond and real estate markets. Get our top-rated newsletter (The Contrarian Report), model portfolio and trade alerts here.