5 Forces That Will Drive Gold Higher In 2018

Potentially the most important force pushing gold prices higher is the inevitable devaluation of the dollar. Commercial and central banks create debt by “printing” dollars from “thin air” and thereby devalue all existing dollars. More loans and newly “printed” dollars create profits for banks at the expense of those holding dollars: savers, pension funds, insurance companies, IRAs, 401(k)s and more. 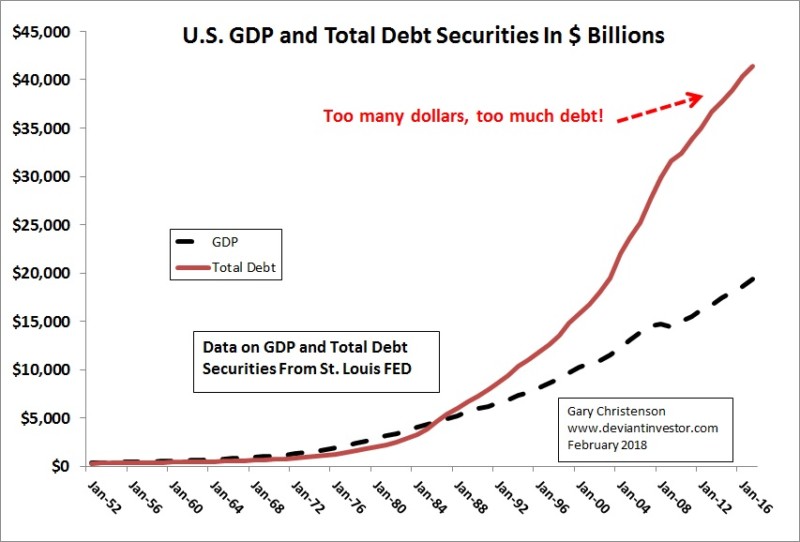 Dollars absolutely decline in purchasing power as they are over produced. The “powers-that-be” prefer this process so expect no voluntary changes.

The U.S. dollar index measures the relative strength among other flawed fiat currencies that also sink in purchasing power due to over-production. The commercial and central banking systems extract wealth from economies and existing currency units through devaluation and printing. Consumers experience it as higher prices. If you buy food, beer, insulin, textbooks, trucks, health insurance or hundreds of other items, you know the results of excessive printing of currency units.

But in addition to the gradual decline of all currencies, one currency may fall more rapidly than the others. 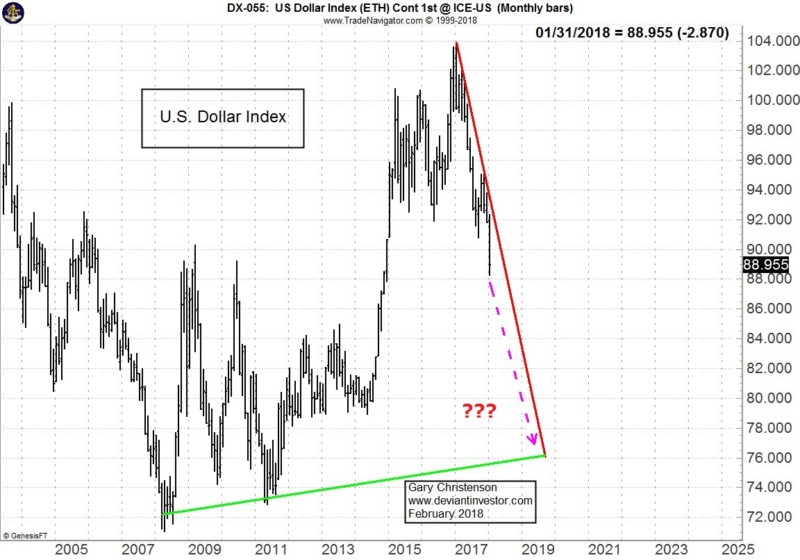 Even against other mismanaged currencies, the dollar has been falling for over a year. After a short bounce it could fall much further.

By dozens of fundamental and valuation measures the DOW, NASDAQ, S&P and many individual stocks are in bubbles. Examine these charts of Netflix, Amazon, and the DOW. You can see vertical moves, a steepening ascent, and large one-month gains – all signs of bubbles. 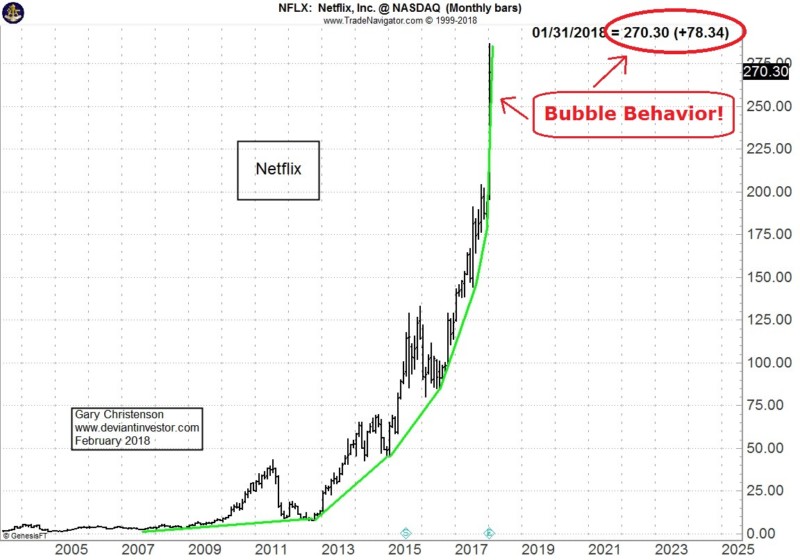 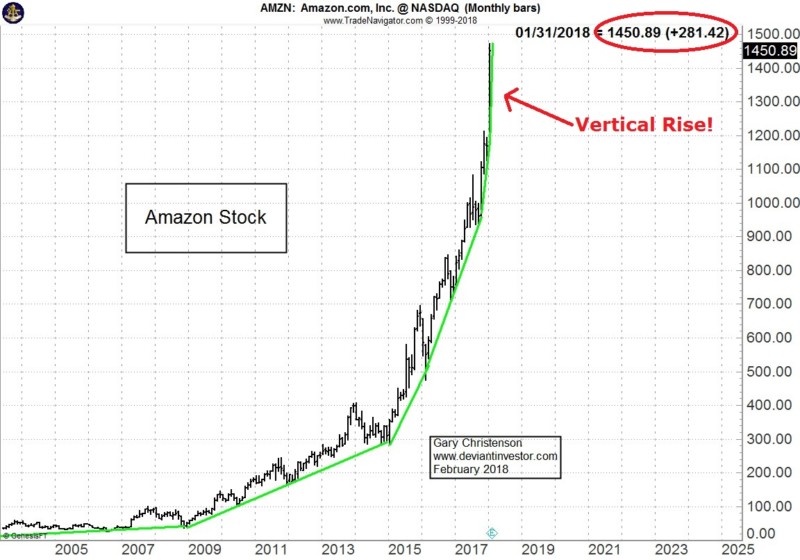 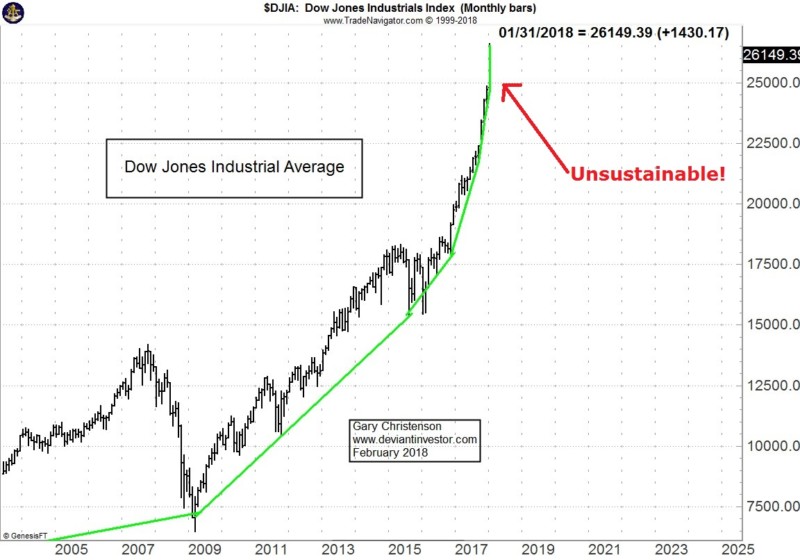 The problem with bubbles is they always implode and cause massive wealth destruction. Remember the devastation of 1987, the larger destruction from the 2000 dot-com bubble, and the horrific crash of the 2006-07 CDO derivatives, real estate, and stock market bubbles. Each crash has been larger. Wealth destruction increases.

Stocks are now in a bubble, all bubbles implode, and we will see massive losses of paper wealth. Individuals, pension funds, and corporations think the paper wealth is real but it can vanish quickly.

When people realize their paper wealth is burning, many will demand something real that has no counter-party liability. Gold has been real money with no counter-party risk for thousands of years and will preserve wealth. A stock market correction or crash will increase demand for gold bullion and gold stocks.

4 – GOLD PRICES ARE TOO LOW AND WILL CORRECT UPWARDS:

Gold is currently selling for more than $1,300, which doesn’t sound low. But remember the measuring unit, the dollar, is deeply flawed, over produced, and has been devalued by 98% since 1913. Compare gold prices to the current all-time highs in the S&P. The ratio shows that gold prices, compared to the S&P, are selling at equivalent 2006 prices – around $550. 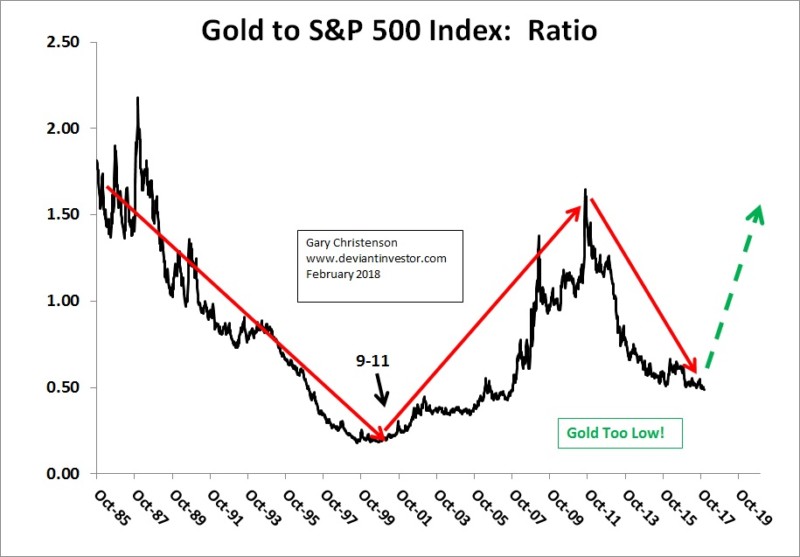 The gold to S&P ratio moves in long-term cycles. It should be bottoming now, which means that gold will move far higher and almost certainly the S&P will fall lower.

Examine the fifteen year chart of gold prices. Note that we are close to a breakout of the 2016 high – a solid signal of higher gold, silver, and miner’s stock prices. 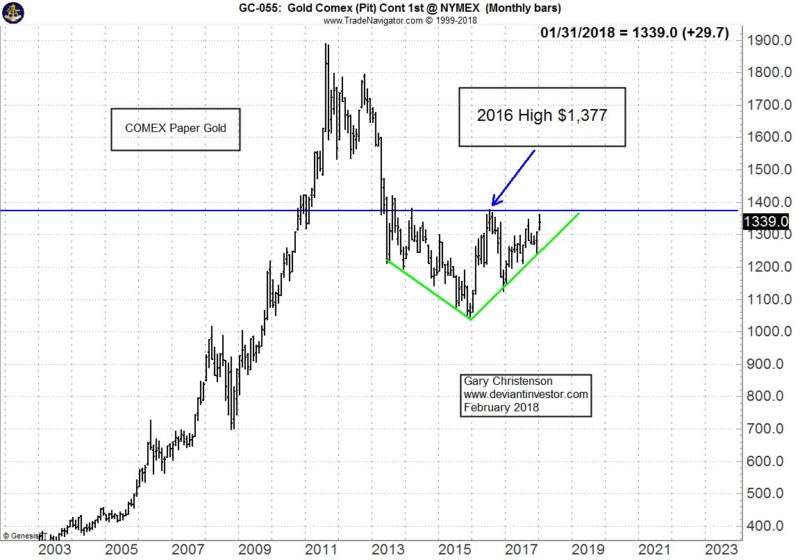 It is no secret that the U.S. has threatened and intimidated many global countries via the SWIFT payment system. The consequence is that China, Russia, Iran and others will bypass the paper dollar and settle trades in systems (recently developed) that insulate those economies and governments from U.S. sanctions and threats.

If dollars are used less in trade, demand slows and that accelerates the dollar’s loss of purchasing power. China is creating exchanges where oil, the yuan, and gold will be bought and sold, bypassing the dollar.

The Chinese people, businesses and central banks have aggressively bought gold for 30 years because they understand its long term value and wealth preservation.

What could replace the dollar and Treasury Notes used in global commerce? Another flawed fiat currency? Special Drawing Rights (SDR) from the IMF? Why would the world choose another debt backed fiat currency?

The official U.S. gold hoard, unaudited since the 1950s, supposedly holds over 8,000 tons of gold. At current prices that is under $400 billion, which the U.S. government spends in about a month. The U.S. government does not want a return to a gold standard because it would destroy our “borrow and spend” economy.

The above graph shows the huge demand for gold from the “Silk Road” countries of India, Turkey, Russia, and China. They have imported and mined gold at a furious pace because they are preparing for the ultimate demise of the dollar in global trade.

That demise of the dollar will not occur next week or next year, but the “Silk Road” countries have a long perspective, understand the history of reserve currencies and they appreciate the destructiveness of excessive western debt. Those countries have many troubles, but are planning their futures around the value and permanence of gold, not the continued dominance of paper dollars.

Yes, there are many reasons to expect on-going decline in the value of the dollar and the rise of gold prices.