I usually cover investments in precious metals. However, I want to cover another precious resource today.

Drinking water is becoming increasingly scarce and going to increase in value in the coming years as drought conditions continue to worsen in the Western United States. Jay Famiglietti, senior water scientist at NASA’s Jet Propulsion Laboratory and a professor at UC Irvine, wrote that California’s reservoirs have only about a one-year supply of water remaining. Furthermore, the snowpack that provides much of the drinking water for the state is at just 12% of normal levels.

Of course, the problem is not just contained to California and the Western United States. A recently-released UN report states that the world could suffer a 40 percent shortfall in water in just 15 years unless countries dramatically change their use of the resource.

Another precious resource, food, is likely to get more expensive as the drought in the West continues, the population expands and water prices rise. Keep in mind that California produces one-third of the country’s vegetables and two-thirds of its fruits and nuts. That includes 99 percent of almonds, 95 percent of broccoli, 90 percent of tomatoes, and 74 percent of lettuce.Food prices have been relatively stable despite the drought, but are expected to rise if conditions persist.

The medical and recreational marijuana industry is booming, particularly in states like Colorado that have recently legalized it for medicinal and recreational use. It is literally a market in its infancy with huge growth ahead as operations are commercialized. And while the above sector may seem unrelated at first blush, the newest generation of growers are using commercial growing techniques such as those employed by agricultural companies and require a steady supply of clean water.

I am bullish on all three of these industries (water, agriculture and marijuana) and have come across a company that can give investors exposure to all three with the purchase of one stock. That company is Two Rivers Water and Farming.

Two Rivers owns a portfolio of water rights in the Arkansas River Basin in Colorado that were obtained in connection with purchases of irrigated farmland. The water rights give them the ability to divert stream flow, operate storage reservoirs, pump ground water and augment depletions of water.

I spoke with the company’s CEO, John McKowen, twice in the past month in order to get a better understanding of their business and plans for the future. He told me that the company went from 500 acres of fruits and veggies in 2014 to 700 acres in 2015 – growth of around 40% growth. They plan to expand another 20-25% over next 2-3 years.

In May of 2014, Two Rivers launched GrowCo, a subsidiary with a mission to build and lease commercial scale, state-of-the-art greenhouses for growing marijuana. GrowCo expects to complete construction of the GCP 1 greenhouse by May 2015. The greenhouse is designed to have 90,000 square feet of growing space and 15,000 square feet of warehouse and processing space. The primary focus will be to grow marijuana from which oils and other byproducts can be extracted and used for marijuana-infused products. Planting in expected in late May or early June, with a full cycle of crop in 4 months and initial revenues rolling in by October.

GrowCo greenhouses significantly increase yield and lower costs compared to a converted warehouse. Utilizing natural sunlight, UV radiation and commercial growing practices within a controlled environment, they expect to yield 2 to 3 times as much  per square foot at around one third to one half the cost of converted warehouse operations. The greenhouses also produce a higher quality product, as the controlled environment allows for optimum temperatures, humidity, nitrogen levels, etc. GrowCo now has the largest greenhouse grow operation in Colorado with 100,000 sq ft of grow space. They have an advantage over warehouse growers with a legacy skill set that don’t understand commercial agriculture.

GrowCo is targeting the construction of three additional greenhouse facilities in Colorado in 2015 and has plans to expand operations into other states in 2016. The following pics show recent construction of GrowCo greenhouses. 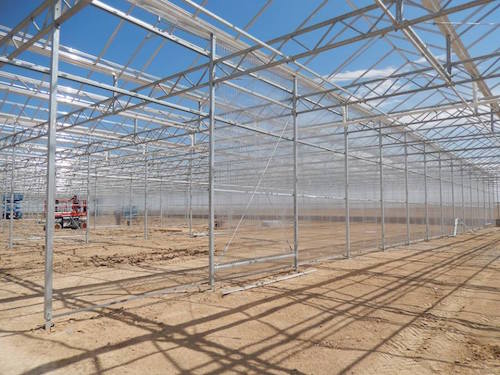 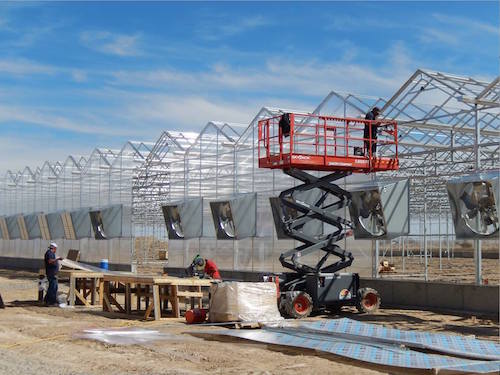 Mr. McKowen expects that their marijuana greenhouse growing operations will be the largest part of the business going forward, at approximately 60-75% of overall revenue by next year. They have chosen to focus on this side of the business for good reason. The margins are significantly better than the water or agriculture sides of the business. The CAPEX for the greenhouses is around $45/sq foot and the rental rate is $20/sq ft annually, producing a payback period of just over two years.

Buying shares of Two Rivers Water & Farming provides an opportunity to get exposure to valuable water and agriculture resources. It also gives investors exposure to the rapidly growing marijuana business, as Two Rivers will be the majority owner of shares in GrowCo once the company is spun out into a separate public company at some point in 2016.

Two Rivers is planning an exchange listing within the next year and has already submitted an application.The graduation from the OTC to an exchange should help to increase investor interest and improve access to capital markets.

The chart shows the downtrend in place over the past year. There is clear technical support is at $0.50, raising expectations of a bounce in the near term. The RSI has plenty of room to push higher. 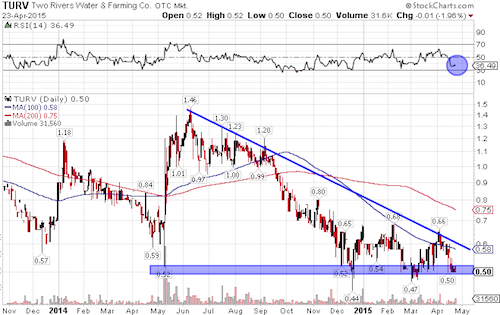 If you would like to get a better feel for the company, you can listen to a discussion with management here. It is a bit dated (August, 2014), but still offers insights into their plans and the thinking of management at the time.

Please keep in mind that Two Rivers (TURV) in a small-cap stock with a market cap under $15M. They still trade OTC and shares are not very liquid. In addition, marijuana is still illegal at the Federal level, despite State laws. The stock price is very volatile and has trended down over the past year. Please perform your own due diligence before investing.

Disclosure: I was not compensated to write about this company. However, I do own shares and have profiled the company for Gold Stock Bull premium members in the past month.