Gold and Silver: Inching Toward a Bull Market Trajectory?

Gold and silver prices jumped to new highs versus the US dollar on Thursday (breaching the $1300 and $17 per-ounce marks respectively), despite the fact that the Federal Reserve hiked interest rates and also stated that there could be further hikes in the coming days.

The very next day, however, gold and silver prices fell to $1,289 and $16.95, after the U.S. government stated that it will start imposing a 25% tariff on 1,100 Chinese products starting next month. President Trump said that the trade deal between the United States and China is unfair and has been so for a very long time. It is speculated that the announcement of new tariffs could trigger a full-blown trade war between two of the largest economies in the world today.

This could actually be a boon for safe-haven investments like gold, yet the turbulent week ended with gold prices suffering a loss of $9 per ounce and silver’s gains from last week trimming down to 1%. 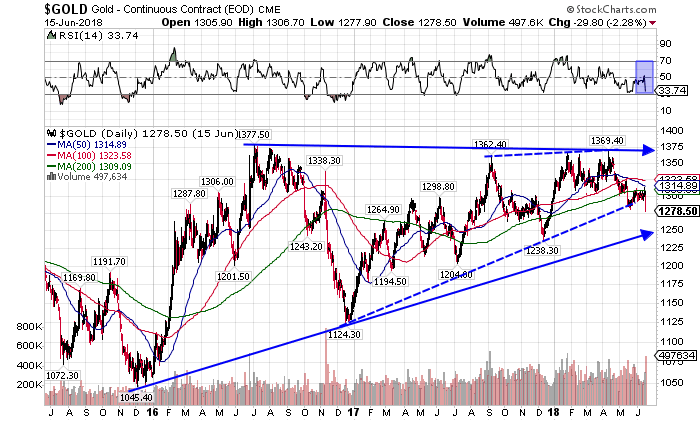 After reaching a two-month high of $17.30, silver met near term resistance. However, it was technically significant that the silver price broke out of the symmetrical triangle patter, however briefly. I still expect the final resolution of this chart pattern to be to the upside by year end. 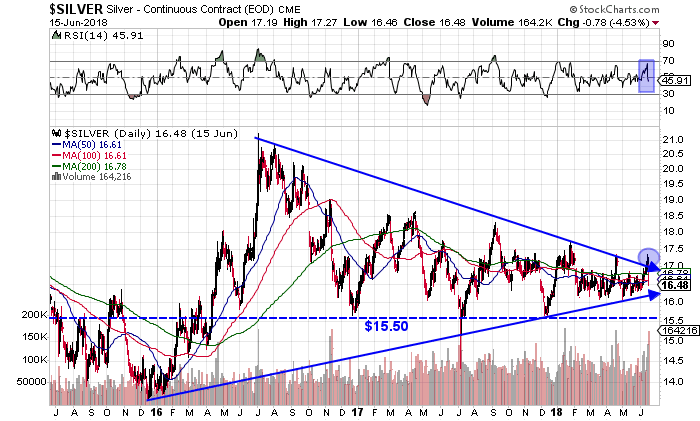 Matthew Turner, a precious metals analyst with the Australia based Macquarie Group, says that gold has ‘done nothing’, despite the fact that it has been one of the most tumultuous years in terms of geopolitical events. He also adds that an $80-per-ounce trading range for gold is very low – in fact, in terms of percentage, it is the lowest it has ever been since 1970, when the price of gold was fixed to the U.S. dollar.

The sentiments are shared by Yuichi Ikemizu, a Tokyo-based precious metals manager who works at ICBC Standard Bank. He says that the volatility in gold price is at a record low currently, similar to what we saw at the end of 2017. Low volatility generally means fewer investors, which further lowers the volatility.

Ikemizu says that the gold futures contracts on the Tokyo Commodity Exchange currently offer a massive 70:1 leverage for traders, since margin payments are typically decided based on the volatility in gold prices. He adds that gold bullion sales are also low in Japan due to a lack of interest from private investors.

So, will gold break out of its doldrums any time in the near future? Matthew Turner believes that gold prices are linked to the overall state of the economy. He says that when central bankers are not in control, gold performs well. Currently, they are firmly in control of a recovering economy. He also points out that in the last two decades, gold as an asset has performed well during periods of recession than inflation.

Silver, on the other hand, is about to complete the second shoulder of what bullion market-maker Societe Generale calls an inverted head and shoulder pattern, which has been going on since 2013. While it is hard to fathom with the current sentiment, we believe the next major bull phase for silver will take the price towards $75 per ounce. This would be following prior patterns of a 5.5x gain from interim lows ($13.50 x 5.5 = $74.25). 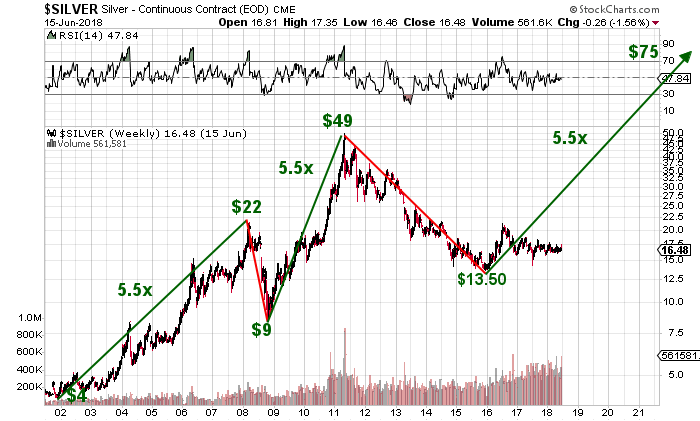 Ronald Stoerferle, who heads the strategy and portfolio management division at Incrementum AG and has also written a number of books on Austrian economics, recently made his forecast for gold.

Stoerferle says that gold is very cheap at present and that we are headed towards a bull market, which is expected to gain momentum after the next market correction.

The sentiment in the market right now is very negative. Investors hardly care about gold, silver, and mining stocks, contrarian investments that have fallen out of favor. Yet, it is particulaly during these times of low interest that bottoms are formed and new bull runs are born.

The problem, however, is that the sector is currently witnessing herd behavior at its most extreme. No one is willing to go against the grain and make a contrarian investment. Stoerferle, however, believes that once gold breaches the $1,360 – $1,380 barrier, which is what he calls the neckline of an inverse head and shoulder formation, it will climb as high as $1,500 to $1,600 in a very short period of time.

The most important point to be noted here is that gold, as of this moment, is extremely cheap – a bargain in every sense of the word. While stocks have rocketed more than 34x higher following the financial crisis, gold has failed to even double during this 10-year period. Thus, the S&P 500-to-gold ratio shows that gold is the most undervalued, relative to stocks, that it has been in over 10 years.

The market, however, is in need of a catalyst that can spur things into action. Fears of an oncoming recession and the volatility in equity markets that it generally leads to could just be the catalysts that the market needs. And Stoerferle believes that we might witness it sooner or later.

Another key point to be noted is that the US dollar does not have a stronghold on international economy like it used to have. Currently, many countries are looking to diversify out of the dollar and are trying to replace it with other currencies in their trade. These countries also happen to be some of the largest holders of gold in the world. So, during the course of the next economic crisis, the chances of gold being revalued are very high.

The chart for the USD shows loss of momentum, a top around 103 on a false breakout and then a downward trajectory over the past year. The dollar has rallied over the past month, but has thus far failed to make a new high versus the prior November 2017 high at 94.86. We anticipate a continuation of the prior downtrend in the months ahead. 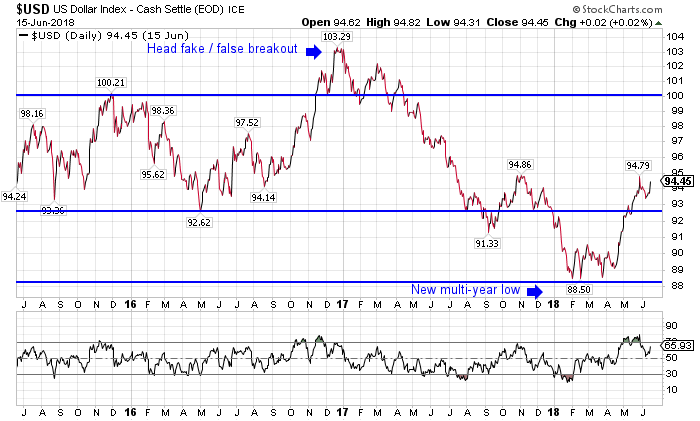 Boyd Baker, who works as an analyst for Ira Epstein, a division of Linn and Associates, says that silver prices could reach $17.92 per ounce, due to the metal’s long term upside potential.

Baker employs an analytical technique called PriceCounts, which is based on the theory that it is entirely possible to project objectives in the direction of a new price trend based on its initial leg. Using this method of analysis, Baker predicts that July silver futures contracts started a new PriceCount when the metal closed above $16.865 two times in the past one week. The first and second objectives, based on this PriceCount, are $17.437 per ounce and $17.922 per ounce respectively.

Silver has been trading within a very narrow range ever since the beginning of this year. On Wednesday, it breached the $17-per-ounce mark for the first time since April 2018.

Gold futures ended the week on a six-month low. July silver futures, on the other hand, ended the week at $16.48 per ounce – a 5% decline from the highs it reached earlier last week. Baker, however, believes that the upside potential of silver will remain intact provided July futures do not dip below $16.19 per ounce. 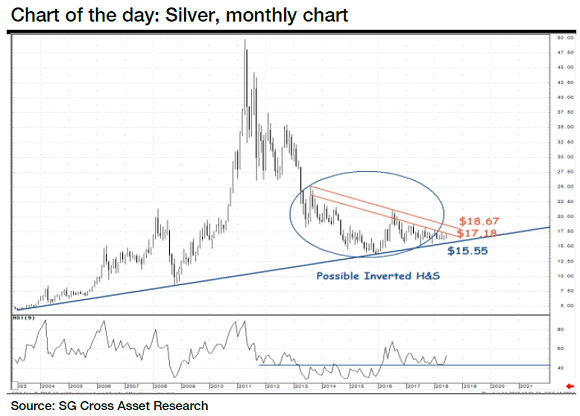 The key resistance for silver, according to Baker, is at $17.45, which he says is a previous PriceCount objective that has already been met. He says that it is a good idea to trade July silver 1,000-ounce futures at $16.75 or higher. He advises investors to place sell-stop orders at $16.30, take half-profits at $17.40, move the stops up to break even, and then exit the remaining positions at $17.90.

While it has been an uphill battle for silver to keep up with gold, with gold-silver ratio currently at 77, analysts still remain bullish on silver and believe that the metal has tremendous upside potential in the long term. As the world makes the transition from fossil fuels to renewable energy, the demand for silver is expected to increase greatly, as the white metal is used in solar panels, batteries, and electronic circuitry extensively.

Get our detailed research into precious metals, including our top gold and silver mining stock picks by subscribing here. New subscribers can access a 3-month trial of the service for just $95 by entering the code GSB18 during checkout.