Gold recently completed a bullish inverted head and shoulders continuation pattern and quickly put in a gain of $100 or 10%. While the rise has been impressive, the technical picture suggests gold has much higher to go before any meaningful correction will surface. Although a few analysts are already calling a top, it is mostly the same bunch that has been calling a top on every breakout since 2001 when gold was selling for just $300. They will eventually call the top correctly, although I expect it will be a few years and a few thousand dollars from here.

While I tend to favor fundamental analysis and never fall in love with the predictions offered by technical analysis, it is hard to deny just how textbook the recent head and shoulders pattern has developed. The anticipated breakout should take the gold price above $1,300 before consolidating and towards the target of $1,500 during 2010. It is worth noting that while the stochastics are flashing overbought, they have yet to turn down and have further to run before reaching the highs corresponding with previous peaks in the gold price (see red arrows at bottom of chart). 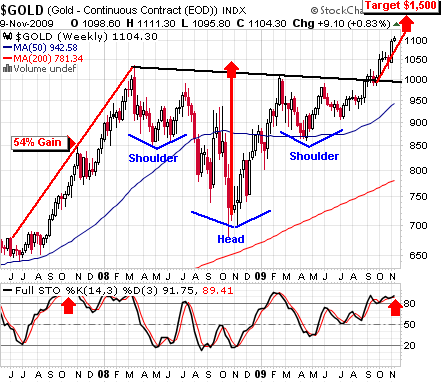 When using technical analysis, it is important to consider a variety of time periods and not over-analyze any particular period in isolation. So let’s expand the chart back to the beginning of the current bull run and see what the previous uplegs might forecast about current gold action. 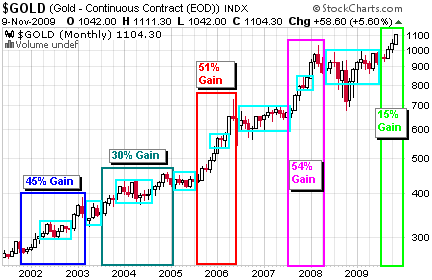 The long-term chart shows that we have just entered the 5th major upleg of a very orderly and powerful advance since 2001. Previous uplegs have lasted at least 9 months and registered gains of anywhere between 30-55%. Each upleg has been separated by a shorter period of correction/consolidation and each upleg also contains a short consolidation period midway through the advance (see aqua-colored boxes).

The trend seems to be towards shorter and more potent breakout periods with longer correction/consolidation periods in between. This makes perfect sense if you view the consolidation period as a “breather” or chance for the bull to rest and rebuild energy before the next major move. Consolidation periods can also be viewed as a spring that builds an increasing amount of potential energy the longer the price stabilizes. When buyers return to the market after a long period of consolidation, explosive breakouts tend to ensue. This is precisely where gold sits today, finally breaking out more than a year after hitting $1,000 for the first time.

You will notice the 2007 consolidation period was the longest and the subsequent breakout was the most powerful to date at about 54%. If this trend continues, the current upleg has the potential to outpace the previous gain as it is coming off the heels of the longest correction/consolidation phase to date. Thus far gold has gained 10% from the $1,000 mark or about 15% from the right shoulder line at $950. If the upleg continues and mirrors the magnitude of the previous breakout, we should easily reach the price target somewhere in the $1450 to $1,550 range. This target also matches the $1,500 gold prediction made by Merrill Lynch at the start of the year.

Analysts calling $1,110 a top are missing the bigger picture, as the current upleg has only been in effect a fraction of the time posted by previous uplegs at only a fraction of the gain. While a brief mid-leg consolidation can be expected somewhere in the $1,150-$1,200 range, historic trends suggests the current upleg in gold is just getting started.

Given this context, we will use any short-term weakness or dips in the gold price to add to positions. If you would like to view the Gold Stock Bull portfolio (+132% in 2009), receive our buy/sell email trading alerts and the monthly contrarian newsletter, become a premium member now.