Gold Stocks On the Verge of a Breakout

If you are invested in gold, silver and the companies that mine these metals, you might be a bit disappointed by the relative lack of action over the past year. Indeed, if you would have bought the HUI exactly one year ago, you would up a whopping 4% as of the publishing date of this article (April 5, 2007). And if you would have bought 11 months ago (in May), you would actually be down 11%. The HUI has been trading up and down, but has been confined to an ever tightening range. Take heart, as this extended bout of sideways trading must be looked at with some perspective.

Prior to this 14-month lull, the HUI had skyrocketed from 165 to 350, increasing by 112% in just 9 months. So while the latest year has not been stellar by any means, the HUI has produced an annualized return of 61% over the past two years. You will be hard pressed to find another investment option that can compete with that return.

What we have witnessed with gold stocks over the past year has been a very healthy and very necessary correction. In fact, every aspect of this consolidation is in line with the expected trends of a continuing bull market.

There have been a series of 4 corrections within the consolidation period and each correction has been less severe than the prior one:

As you can see below, this has created compression within the chart as the trading range has become increasingly tight. The longer this occurs and the tighter the range becomes, the more potential energy is stored and on tap once the HUI decides to break. While there is always the possibility that the breakout could be to the downside, there are several bullish signals which suggest otherwise. 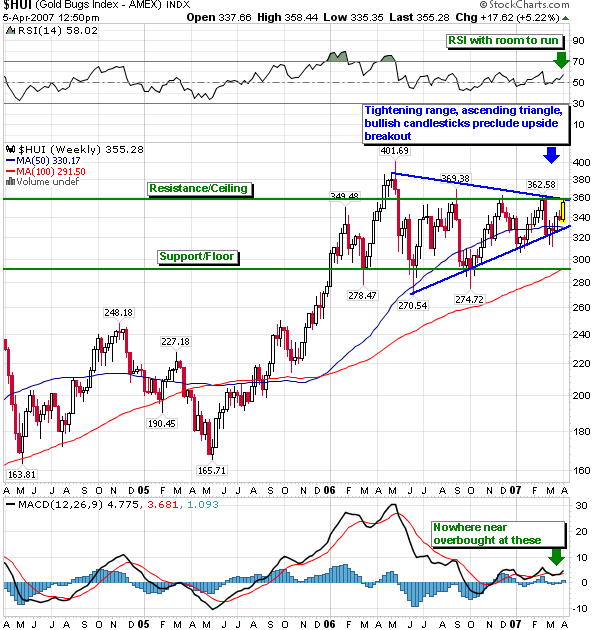 It is clear in the chart that an ascending triangle pattern has formed, which is a bullish signal and usually precedes a strong upside breakout. We also have three consecutive days of bullish candlestick patterns and both the RSI and MACD indicators are turning up and have plenty of room to run. While we are on the verge of a breakout in gold and gold stocks, we have yet to receive confirmation and will remain cautious of the double-top headfake. How will be know when to take action and which way prices are headed?

While technical analysis is never an exact science, we will consider a breakout above 360 as very encouraging and a breakout above 370 as confirmation that the HUI is headed for new highs. After 370, we see clear sailing towards the 420 mark and onwards to 450 with little resistance. On the downside, the HUI must hold support around 330. Two consecutive closes below 330 will be a sell signal and preclude a drop back towards support at the 100-day moving average (291). Whether the move is up or down, we expect it to be a fast and furious ride. For this reason, we will be looking to load up when the HUI moves towards 370 or quickly exit our positions on a drop below 330. As of this moment, the HUI appears to be on the verge of a breakout that could be the start of the infamous wave 3 that we have been anticipating for so long.

It was announced today that Iran freed the 15 British sailors that it captured at sea and Washington welcomed the move. This should ease tensions a bit and we may see some weakness in both gold and energy as a result. But I fully expect any weakness to be short-term as the root of the problem still festers and Iran hasn’t budged the slightest bit with regards to its rights to produce nuclear energy. Time Magazine recently published an article entitled “Is A US-Iran War Inevitable?,” and there are a series of other articles and authors hypothesizing that some type of military strike could occur in the coming weeks. Military confrontation with Iran will be 100-fold messier than what we have experienced in Iraq and we fully expect gold prices to reach towards $800 and oil prices to quickly surpass $80 within the first few days of such a confrontation. We see gold and energy prices increasing regardless of war with Iran and can only hope cooler heads prevail in what could be a slippery-slope towards World War III.

China is projected to need 100 tonnes more in gold than they will produce in 2007.

The Monsoon Wedding Season is coming up in India and two new ETFs have provided additional ways for Indians to invest in gold.

The IMF reported that the amount of gold held by central banks declined for the eighth straight year during 2006. Bullion holdings were the lowest since 1948, according to the World Gold Council. Central banks have been able to suppress the price of gold in the past by flooding the market with new sales. But as their reserves dwindle, this threat becomes less and less substantial. In fact, central banks fell short of their announced gold sales last year, which we see as a sign of things to come.

China will likely continue to diversify their more than $1 trillion in currency reserves away from the U.S. dollars. If even a small portion of this is used to buy gold for their central bank reserves, the price of gold will soar.

We will be maintaining our core positions in quality miners and alternative energy companies. We are also sitting on a significant amount of cash and waiting for the HUI to close above 365 to add to our positions. We have stops set to exit positions on any declines of 6% or more from current levels. This is roughly in line with the HUI dropping below support around 330.

You can read full articles about which companies we believe will prosper most in the coming months by clicking on Gold Stock Picks, Silver Stock Picks or Energy Stock Picks in the “Categories” menu bar on the left-hand side of our site. A few of our favorites are Yamana Gold (AUY), Golden Star Resources(GSS), Fronteer Development (FRG), YGC Resources (YGC) and Silver Wheaton (SLW). We also maintain positions in gold, silver and energy ETFs including GLD, SLV and PBW.

As a side note, we expect gold stocks to regain their lost leverage to the price of gold and rise proportionally much faster than in the previous few years. We also see juniors taking off and significantly outperforming the majors as there will be a scramble to acquire new resources. More takeovers are on the way and we are sitting on a handful of companies we believe are prime takeover targets.

We are not currently charging for access to our articles and analyses. If you found this information valuable, please consider leaving a small donation by clicking here. Thanks and happy investing!