Gold May Shoot Up to $1,400 Says Top Forecaster

So far, gold prices are achieving the best start to a year in three decades. Gold may rally to as high as $1,400 an ounce should risk aversion intensify, according to the top-ranked precious metals forecaster, who dubbed bullion a “superhero” when raising his outlook for 2016.

“Gold is performing largely as a safe-haven asset given the equity doldrums and overall risk aversion,” Gan said in response to e-mailed questions, laying out his case for changing his forecasts. “Should risk aversion dominate amid intensified global growth headwinds, gold may well rally to as high as $1,400.”

Amid the global equity downturn, very low oil prices and magnified risk aversion seen since the start of the year, one hero stood up strong, providing shelter,” Gan wrote in the report, describing bullion as a “gold, the superhero” in a headline. OCBC was ranked by Bloomberg as the top precious metals forecaster for the final quarter of last year.

On the other side of things, Goldman Sachs has been urging their clients to sell gold all year and has been horribly wrong on this call. They overestimated the ability of the FED to raise rates aggressively, with expectations of another hike in March down to 10% from 50% in earlier estimates. The trend globally is now towards negative interest rates (NIRP) and one has to wonder if the FED can continue hiking rates in this environment.

I think the analysts are all undershooting the potential gold price advance in 2016. With investors desperately looking for value in overvalued markets, I think funds flowing into the gold market could push the price to $1,600 or higher. Fear moves the gold market and there is a currency crisis unfolding in China, a potential systemic banking crisis, and fears of a full-scale economic recession after stocks posted the worst start to the year since 2008.

Another bullish factor fast approaching is that China plans to launch yuan-denominated gold fix on April 19. This could be a game-changer as price discovery moves from the rigged paper markets in the West to the physical markets in the East. This is likely to mark the end of the current bear cycle in gold, if we haven’t seen it already.

Rounding out bullish factors is the potential that we have seen peak gold production, with supplies dropping as miners have slashed exploration budgets and shut down mines at low prices over the past few years. This is occurring while overall demand remains incredibly robust and investment demand has been soaring. 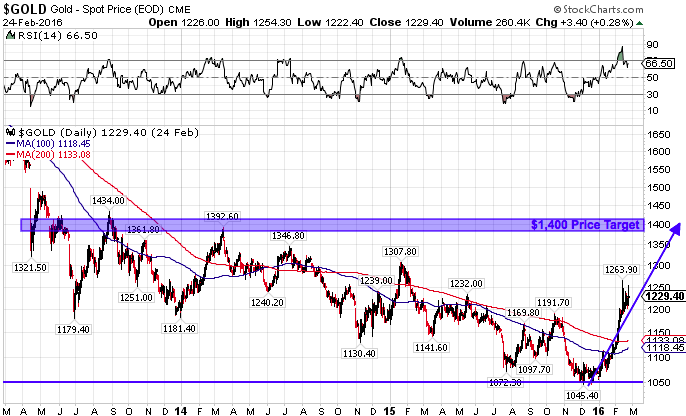 We advocate owning physical precious metals in your possession first and foremost, but quality mining stocks offer significant leverage to the advance in the gold price. Our top mining stock pick is up over 100% so far in 2016. Find out more by becoming a premium member for less than $1 per day.