China has been quietly accumulating a significant amount of gold bullion in recent years. They are now the top producer and top consumer of gold in the world. They are believed to keep all of their domestic production, plus import significant amounts from other nations. In addition, they have been buying up gold mines around the globe at steep discounts and bringing home gold they had stored in London, New York and Switzerland.

After accumulating all of this gold, along with their close ally Russia, many believe they will eventually break the metal free from the price manipulation undertaken by the banks/governments in the United States and United Kingdom. Once price discovery moves from West to East, they will allow the price to float to free-market levels and the value of all the gold they have been accumulating will skyrocket.

Removing the gold price suppression will be accompanied by wholesale dumping of U.S. treasury bonds and test the world’s faith in the US dollar debt-based fiat currency system. This will give China, Russia and others a greater influence in world financial markets and better stability in their currencies. It may give them a considerable strategic advantage over the United States, a nation that many believe no longer has the gold that they claim. Indeed, with a lack of a comprehensive audit and unwillingness of officials to allow one, many believe the gold is no longer in Fort Knox.

Now we move to the really interesting part of this story. Not only has China been accumulating huge amounts of gold (on and off record), but they also launched their own international gold trading platform on the SGE. It has become the largest physical gold exchange in the world, with an estimated 52 times more physical gold withdrawals versus the predominantly paper exchange of the COMEX.

Fast forward to the first week of 2016 and China is warning foreign banks that they must participate in Yuan-based gold price fixing or lose their Chinese gold import rights. This first-ever Chinese benchmark is set to launch in April of this year and could be a game-changer for gold prices moving forward.

China has warned foreign banks it could curb their operations in the world’s biggest bullion market if they refuse to participate in the planned launch of a yuan-denominated benchmark price for the metal, sources said.

The world’s top producer and consumer of gold has been pushing to be a price-setter for bullion as part of a broader drive to boost its influence on global markets.

Derived from a contract to be traded on the state-run Shanghai Gold Exchange, the Chinese benchmark is set to launch in April, potentially denting the relevance of the current global standard, the U.S. dollar-denominated London price.

In a trial run for the fix in April 2015, some foreign banks participated along with many major Chinese banks. Traders at those banks said earlier that while they were interested in the benchmarking process, their legal and compliance teams may be reluctant.

The Gold market cannot be fixed by paper gold on a repeated basis, surely not in perpuity. When the Shanghai shock comes, all the Paper Gold structures will fall, all the FOREX derivatives will collapse, all the control rooms will go into panic mode.

The Shanghai shock is not likely to materialize all at once and cause an immediate collapse of the dollar, the COMEX or our fiat monetary system. However, it is another nail in the proverbial coffin and significantly increases the odds of more honest price discovery in precious metals as it moves from West to East.

The red line in the chart below shows Asian gold reserves as a percentage of total gold reserves. The percentage has been rising steadily for decades, but the pace of the increase has picked up significantly since the 2008/09 financial crisis. 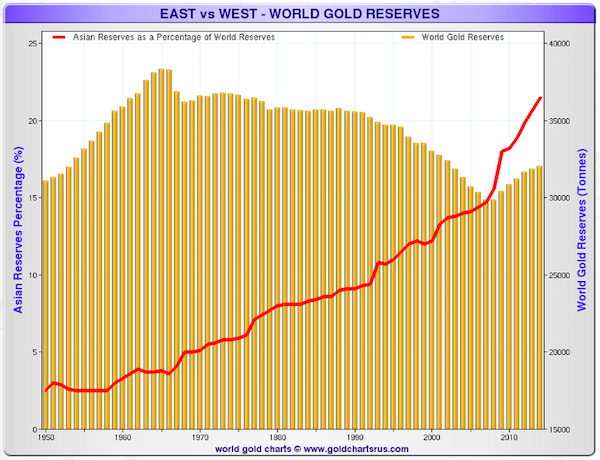 If you believe that the gold price has been suppressed in order to maintain faith in fiat money and allow governments to continue deficit spending to secure their power, it is logical to conclude that gold prices may rise sharply as the disconnect between paper and physical pricing intensifies. And it would make sense for China, Russia and other BRICS nations to push for such a transition, as it would diminish the dominance of the United States in global trade and finance, leveling the playing field.

In any event, it will be an interesting development to watch during 2016. I believe it could be another catalyst in a long list that could cause a spike in gold and silver prices.