Gold, silver and oil prices all spiked significantly higher today on news coming out of Saudi Arabia. Several members of the royal family were arrested and imprisoned over the past few days. This appears to be an attempt to consolidate power by the 32-year-old Crown Prince Mohammed bin Salman.

The so-called “anti-corruption probe” is widely seen as  a countercoup that has led to the arrest of dozens of Saudi Arabian royals, ministers and businessmen allowing Price Mohammed to further cement control over the Kingdom. On Monday, Reuters reported that Saudi banks begun freezing the accounts of those arrested.

But the plot has thickened…

Yesterday it was announced that Prince Mansour bin-Muqrin and seven other high-ranking officials died in a helicopter crash near the Yemen border. Prince Mansour was the son of Prince Muqrin bin Abdulaziz, a former intelligence chief who was crown prince between January and April 2015, when he was pushed aside by Prince Mohammed’s father, King Salman, now 81.

Then today the Saudi Royal Court has confirmed the death of another Saudi Prince, as Abdul Aziz bin Fahd was killed during a firefight as authorities attempted to arrest him.

This comes days after the Saudi military intercepted a ballistic missile over the nation’s capital of Riyadh. The Saudi-led military coalition said on Monday it would temporarily close all air, land and sea ports to Yemen to stem the flow of arms from Iran to Houthi rebels. The Saudis are calling the missile attack “blatant act of aggression” by Iran and “could be considered act of war”.

The oil price is also shooting higher on this turmoil, climbing above $57 for the first time in years. Saudi Arabia is the #2 oil-producing nation in the world, so a supply disruption can have significant consequences. 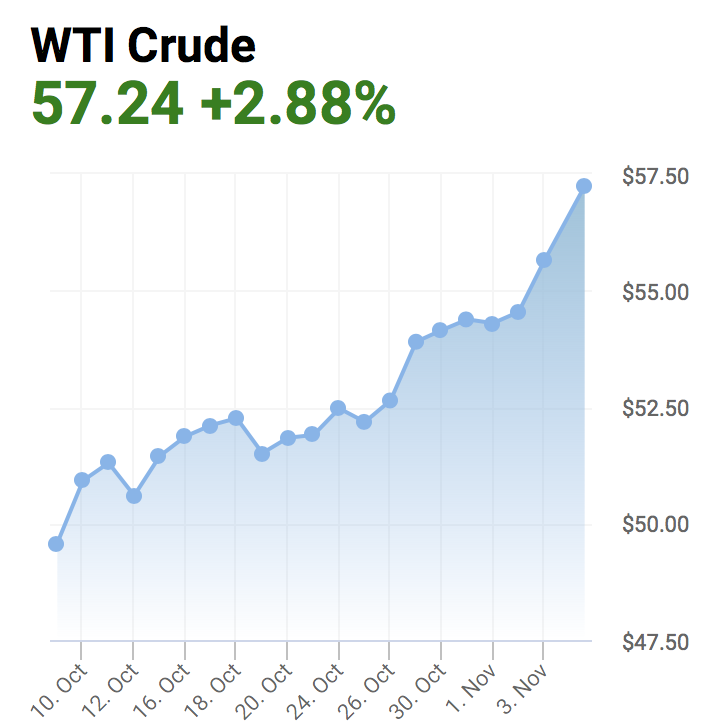 The Gold Miners ETF is up 2.5% today and many of the mining stocks that we track are up 5% or more. Likewise, several of our top energy stock picks are up 7% or more today. You can get all of our top stock picks in precious metals, energy and cryptocurrencies by becoming a premium member. The GSB model portfolio is up more than 100% year to date in 2017! Get started now for just $99!