Every bubble inflates, rises vertically, excites the masses (get rich now – don’t be left behind), appears unstoppable and crashes. The sun rises and sets. Twilight emerges.

Empires, markets, and ideas enter their twilight zone where huge changes occur. Those changes may not happen next week or next month, but soon. Expect the bubbles in stocks and bonds to burst, as they inevitably must, and precious metals to rise – finally! 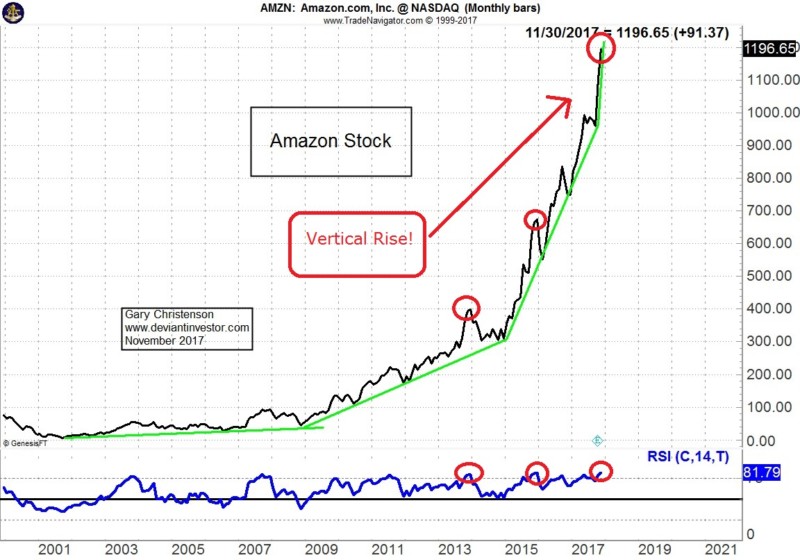 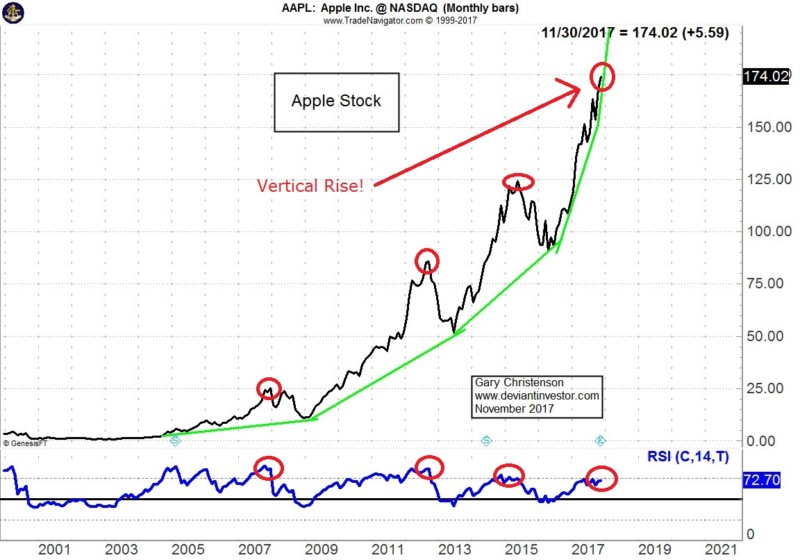 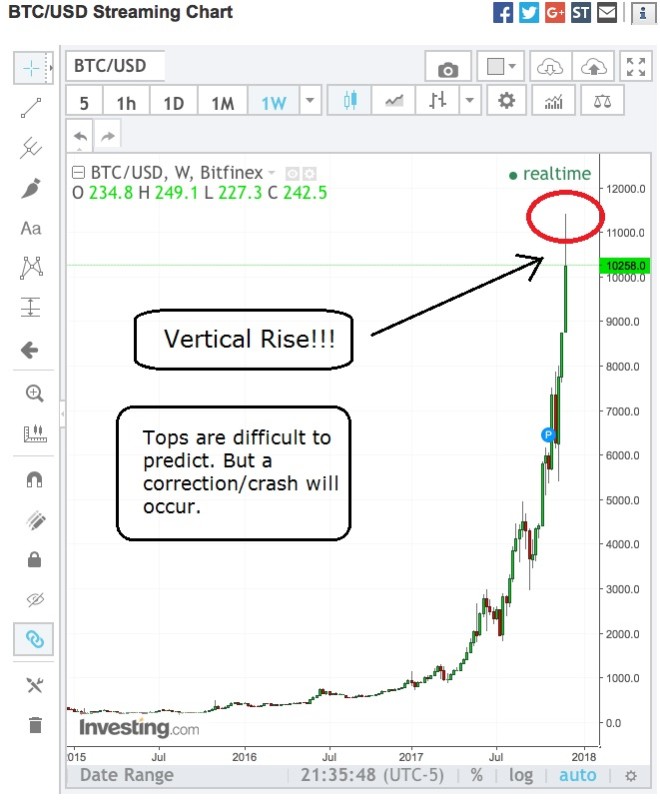 Amazon, Apple and other stocks have posted near vertical rises – classic bubble behavior. We don’t know when they will crash, but crash they will! 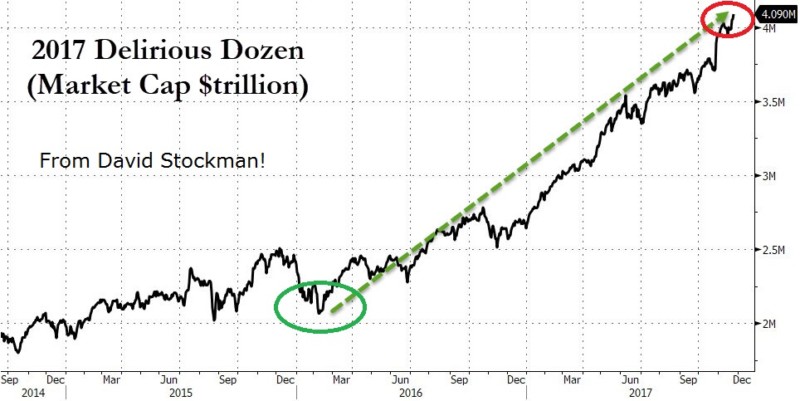 Per Stockman, the market cap of these 12 stocks soared from $1.7 trillion to $4.0 trillion in 40 months, and doubled in the past two years. For comparison, market cap for these 12 stocks is approximately 20 times the value of the gold supposedly stored in the Fort Knox Bullion Depository.

If the Federal Reserve, Bank of Japan and other central banks were as powerful as many believe, the crashes of 2000 and 2008 would not have occurred.

The problem is that bubbles crash and paper wealth is destroyed. Many portfolios and retirement plans never recover. Consider the NASDAQ 100 after the 2000 crash – down over 80%. 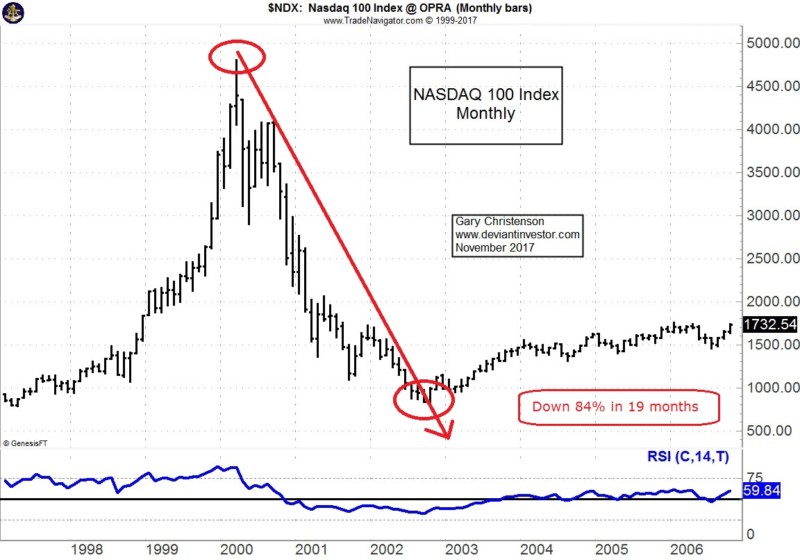 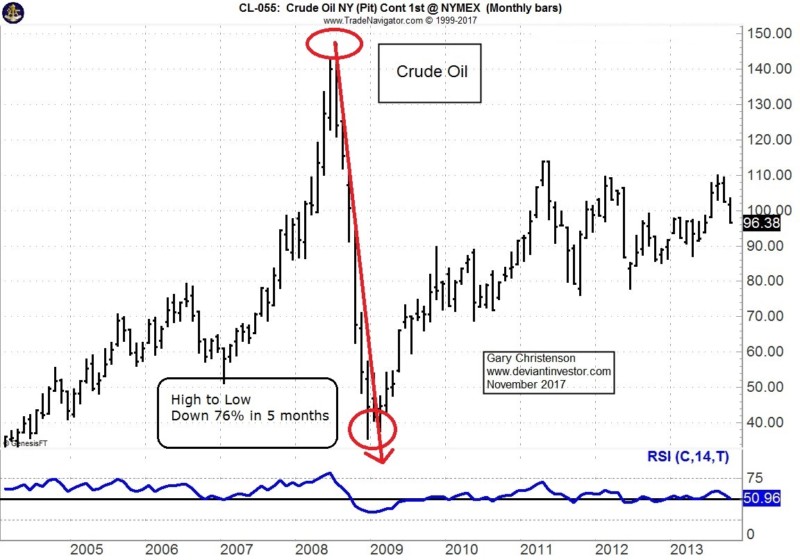 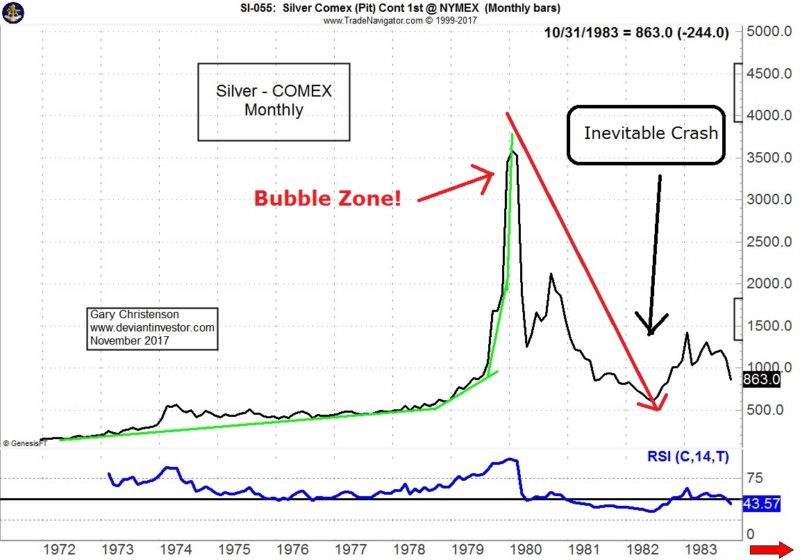 Bubbles crash. Do your own due diligence.

Central banks have created trillions of new digital currency units and pushed the global economy into The Twilight Zone! 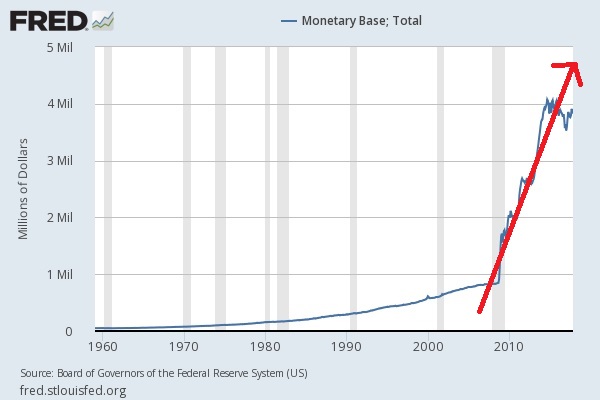 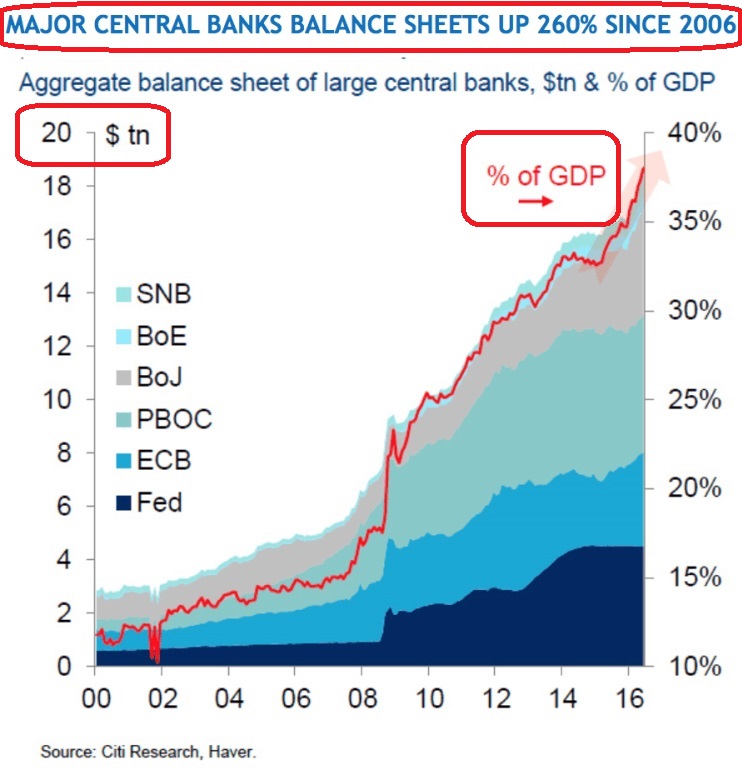 What about valuations In The Twilight Zone?

From John P. Hussman, Ph.D.:  Link  Valuations are high and U.S. stocks are expensive. A correction or crash is likely. 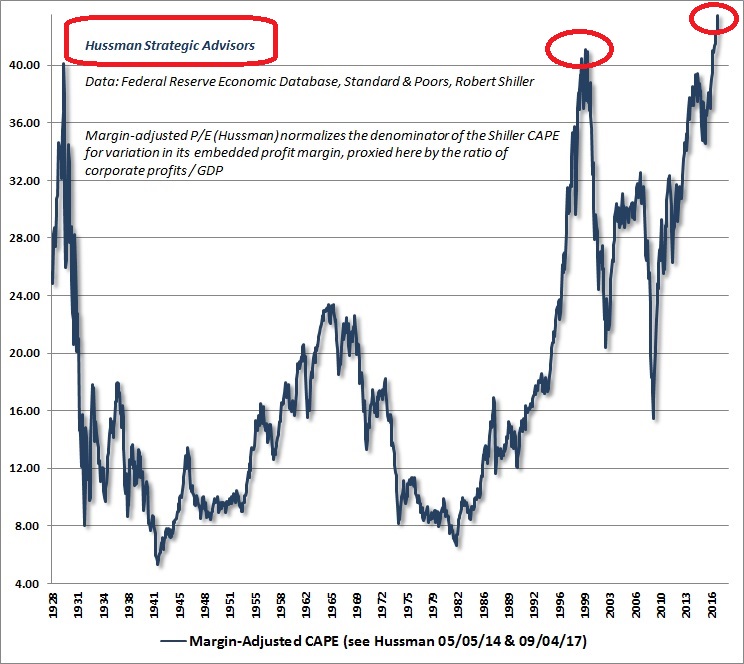 From Francesco Filia: The World’s Twin Asset Bubbles Could Collapse Under Their Own Weight:

“There are the usual metrics that the valuation guys are looking at, like financial assets to disposable income that shows that this market is way more expensive than at any point in history including the big dot com bubble and the Lehman moment in 2007-2008. 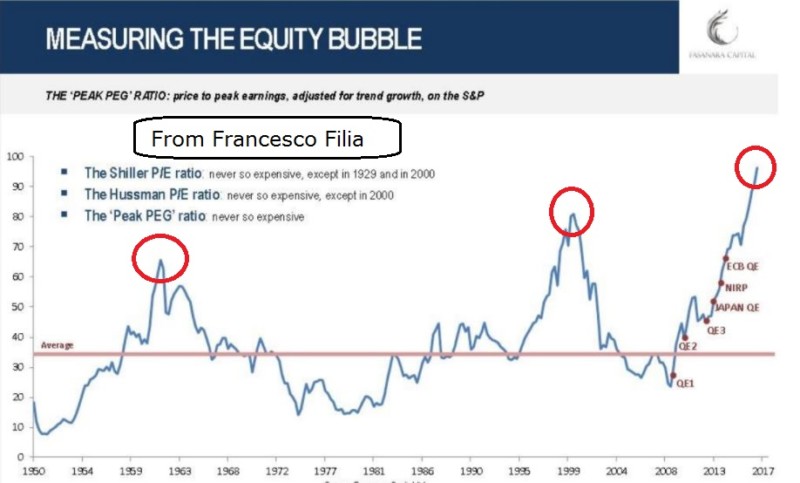 Repeat: “… this is a market bubble that has not been seen before in history.”

Many people and businesses saw their savings, retirement and living conditions devastated by past bubble implosions, whether the bubbles occurred in debt, real estate, commodities or stocks. Examples:

Central banks, Wall Street, and greed have boosted risk associated with paper assets, and levitated many stocks and bonds to nose-bleed levels. Consider:

As We Dive Deeper Into the Twilight Zone:

Expect a nasty hangover and tears. Few will increase their wealth and purchasing power.

Gold, silver, and selected gold and silver stocks will help.

Stock indices, debt, gold and silver rise exponentially, because central banks and governments continually devalue unbacked currency units. But precious metals prices are low and most stocks are expensive. A reversal is coming.

Why are gold and silver prices so low relative to debt securities, the S&P 500 Index, national debt and their all-time highs?

The 40 year graph of the Dow Jones Industrial Average shows a vertical rally. The Dow peaked 10, 17 and 30 years ago. Valuations are high and the RSI (timing indicator shown below) has registered a two-decade high indicating extreme danger of a correction or crash. 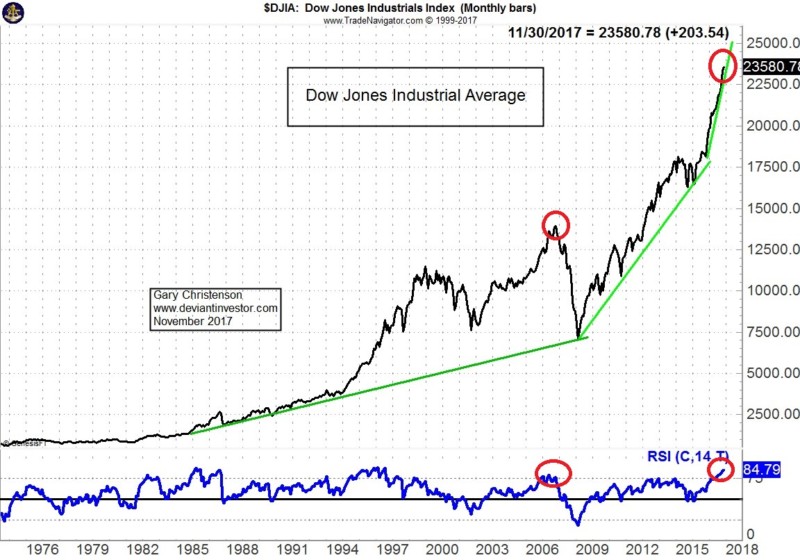 Many stocks and bonds are high risk speculations while gold and silver are low risk alternatives. The near-term upside for most stocks and bonds is limited, while their risk is substantial. 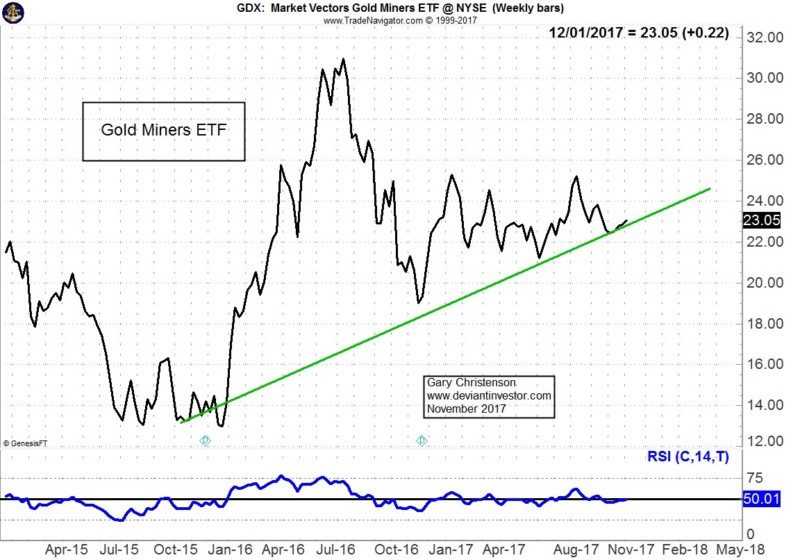 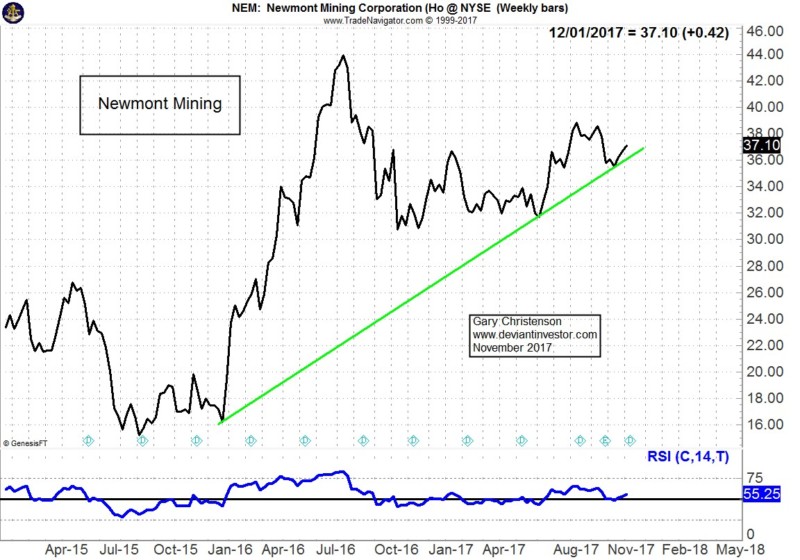 Risk in paper assets including most stocks and bonds is high. Bubbles crash – but timing is unpredictable.

Gold and silver will rise much higher in coming years, unless we get responsible government, balanced budgets, national debt reductions, and curtailed war efforts.