Since 1971 when President Nixon allowed the dollar’s purchasing power to sink and asset prices to rise exponentially:

Examine the 46 year log scale graph of the S&P 500 Index and observe the consequence of devaluing dollars. 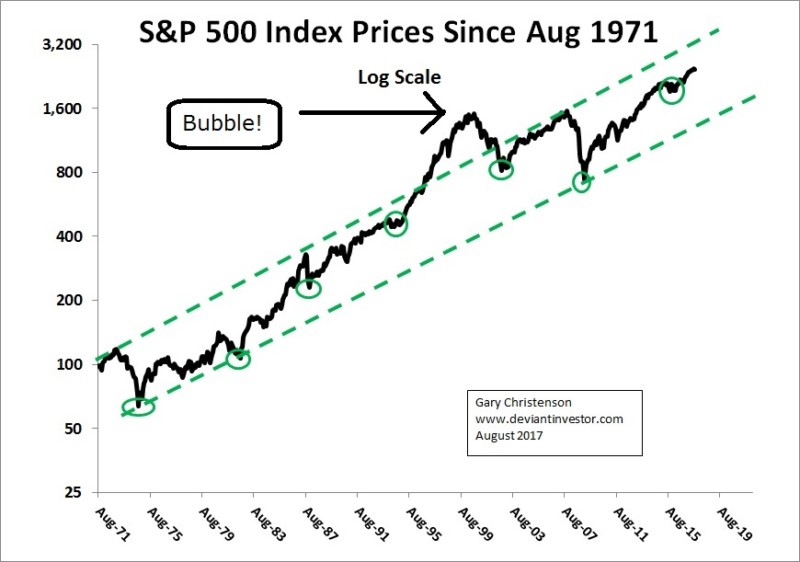 Examine the 46 year log scale graph of gold prices and observe the consequence of devaluing dollars. 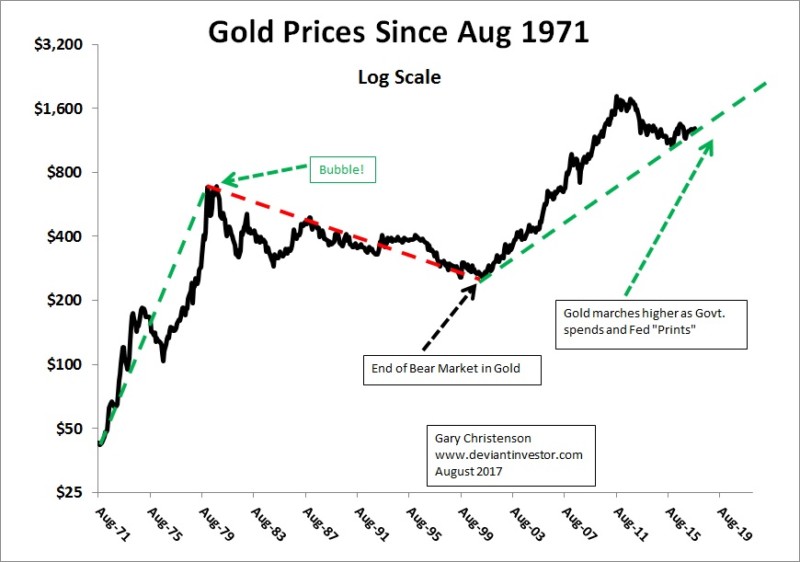 The S&P has enjoyed a long term uptrend with periodic corrections or crashes, as indicated by the green ovals. The S&P could fall over 50% and still remain inside the 46 year uptrend.

Stock markets, gold, and consumer prices rise as the dollar is devalued.  The dollar has declined in purchasing power since 1971 and will devalue further because our monetary system has not changed.

Expect the S&P to correct or crash, and then rise again.  The ride may be rough.  The correction might be extreme. Stormy weather ahead!

Gold will rise as further dollar devaluation and increasing demand are all but guaranteed.

WHAT ABOUT RELATIVE STRENGTH BETWEEN GOLD AND THE S&P?

Consider this graph of the gold to S&P ratio over 50 years. 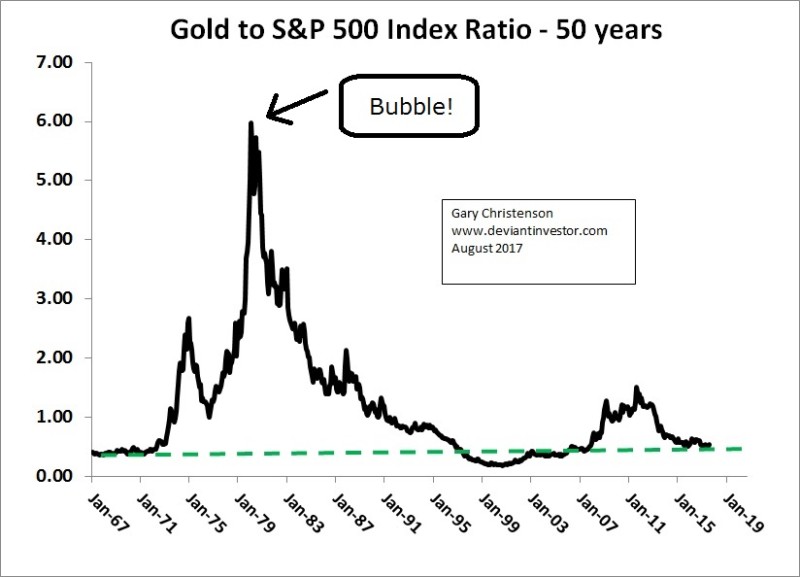 Long term we expect both the S&P and gold to rise as the dollar is continually devalued.  The world uses a debt based fiat monetary system where the dollar and most global currencies are backed by nothing but IOUs, faith, hope, debt, and taxing authority.  Since 1971 prices have risen exponentially. There is little reason to expect change.

If Russia or China backs their currency with gold in the next decade, gold’s rise will accelerate when measured in devaluing dollars.

In the short term, the month of August has seen the S&P, DOW, and NASDAQ roll-over, based on prices and monthly indicators – the RSI, MACD, and TDI.  Past monthly roll-overs in these indicators (from high levels) usually indicated long-term tops and the beginnings of multi-month declines.  Weekly and daily versions of these indicators also peaked and declined since August 8, the peak in the DOW and S&P.  The NASDAQ composite peaked July 27. 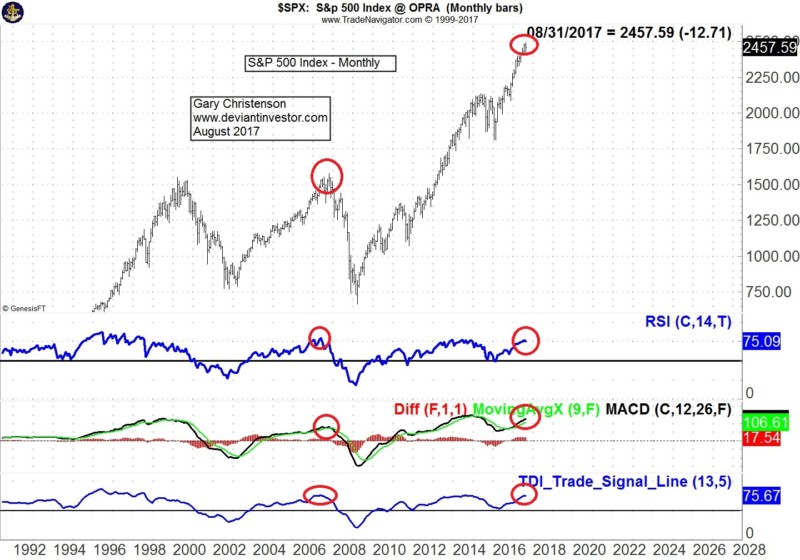 Note the previous roll-over in those indicators.

In the short term, the same three indicators on the monthly charts have turned upward.  In the past this indicated a continuing price rise. 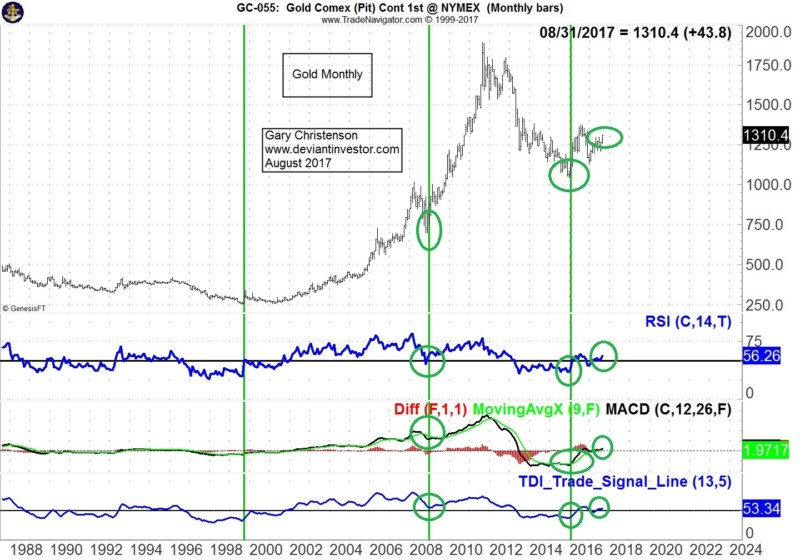 WHAT ABOUT GOLD STOCKS?

Gold stocks have fallen for the past decade.  See the chart of the XAU, an index of gold stocks. 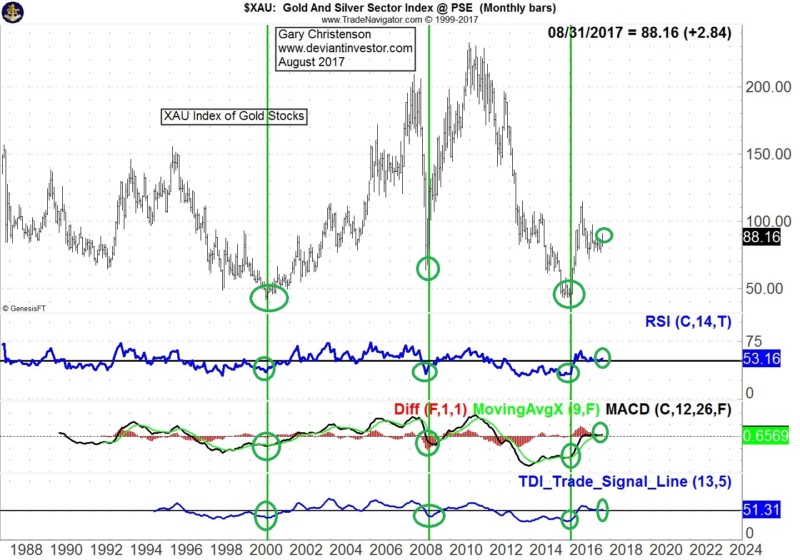 TheDailyGold.com published an interesting chart tracking past gold stock bull markets, indexed to 100.  The chart shows gold stocks 2000 – 2008 and 1960 – 1968 and compares those rallies to the current bull market that began in January 2016.  If this bull market is similar to the last two bull markets, gold stocks could triple (or more) over the next six years. 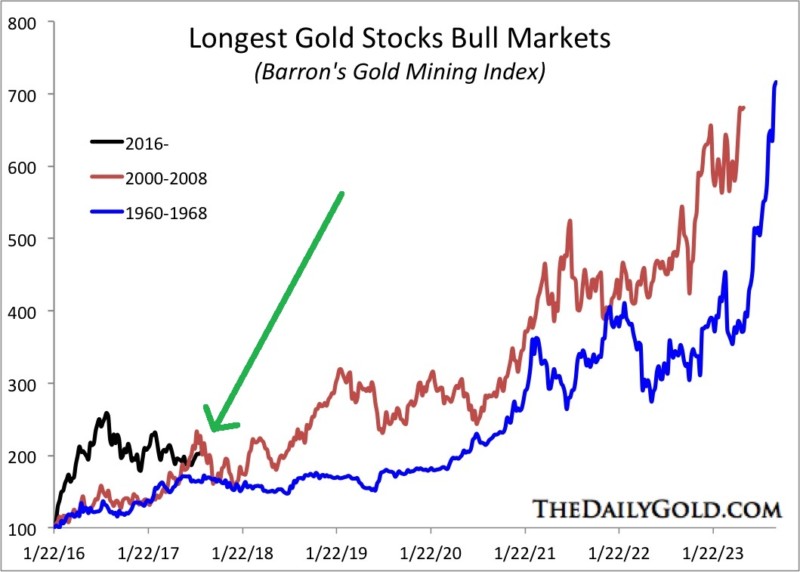