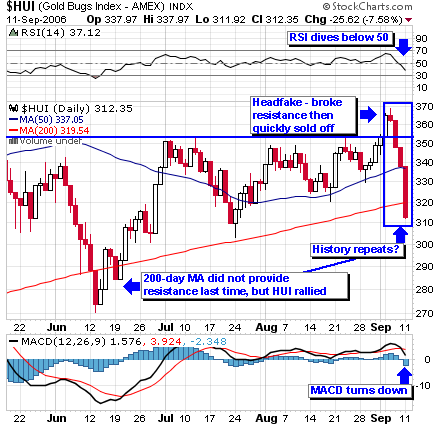 Ouch. Since the HUI broke resistance and gave us a buy signal, it has since dropped 14% in a matter of days, crashing through both its 50-day and 200-day moving averages. Gold’s spot price also dropped, shedding $45 to rest around its 200-day moving average at $590. This is the first time we have seen sub-$600 gold in over two months. Sentiment towards precious metals has turned negative in a hurry.

A stronger dollar, weaker oil prices and relative stability in the Middle East are the likely drivers of this sell-off. While Iranian and European officials are making some headway, we don’t see Iran backing down from their stance of having the right to produce nuclear energy. Likewise, we don’t see the Bush administration settling for anything less than a complete shutdown of Iran’s nuclear plants. And it is common knowledge that many inside the Bush administration are agitating for war with Iran. UN Secretary General Kofi Annan recently expressed his fears that the standoff could lead to war.

Another significant driver of the gold sell-off is fear of central bank selling. There is potential, under the central bank gold agreement, for a remaining 160 metric tons of gold to flood the market between now and September 26th. Whether central banks will sell more gold to meet the quota is a matter of debate, but the possibility is weighing on the gold market regardless. If banks do not meet quota, it will be a very bullish sign for gold.

But were these factors enough to produce a decline as severe as we have just witnessed? The more likely cause of this sell-off is massive short-selling by dealers, which Ted Butler lays out quite clearly in his article Blatant Manipulation. Bill Murphy, co-founder of the Gold Antitrust Action Committee (GATA), goes into great detail about this manipulation here. What it boils down to is dealers sucking in institutional and technical traders and then colluding to pull the rug out from underneath them:

That last part about manipulating overnight, when trading is thin, really hit me. I watched the prices drop dramatically the night before the correction and wondered why such action would be taking place when major price movements always occur during New York trading times.

Pushing the price down in early September serves the cartel well by shaking out weak hands just before gold heads into its high season. Gold has a solid track record of advancing during every September since 2000, driven mainly by increased demand during the Indian wedding season. In fact, gold has only fallen nine times during the month of September since it began trading on exchanges in 1975.

You might have heard this before, but it is worth repeating: Investing in gold and silver stocks is not for the faint of heart. While the run-ups can be fast and loads of fun to watch, the corrections are usually even faster and more severe. But even with knowledge of the manipulation and volatility, we maintain that gold and silver provides the greatest investment opportunities available today. We agree with Mr. Butler that the manipulation is the very reason that you should buy gold and silver. The unintended consequence of the manipulation is that it is allowing you to buy gold and silver at way below what the price should be. If you were long during this sell-off, you are probably a little bitter about now, but there is a silver lining (pun intended) and it only requires a small shift in perspective to realize it:

We all have the choice to view the glass as half-empty or half-full. The manipulators do win some short-term battles against the technical funds and other leveraged traders. But they are clearly losing the war and you, the long-term real silver investor is clearly winning. Here we are, after yet another vicious and engineered sell-off, still over $11 and the gold/silver ratio at close to 53 to 1. In days not so long ago, sell-offs ended at 4 or 5 something, with the ratio at 70 or 80 to 1.

What To Do Next?

You must maintain a long-term perspective and avoid emotionally-fueled trading mistakes. The gold market is very tricky to trade and has even the most astute analysts scratching their heads and licking their wounds. Many would argue that you are better to buy and hold. We are of the opinion that the buy-and-hold strategy will probably prove to be the most profitable for the majority of investors. But if you have spare cash, you should use occasions such as this to add to your long positions.

Technical analysis is only one part of the equation and in this case, the manipulators also noted the buy signal and used it to swindle funds and small investors. Both gold and the HUI did not find much support today at their 200-day moving averages, which is further cause for concern (from a technical standpoint). But the other side of the equation, the fundamental reasons for owning gold are still in tact.

We do not believe this will be a sustained correction and think this dip presents buying opportunities. It is the hardest thing to do, but you have to put on your contrarian hat to prosper in the markets: Buy when the prices correct and sentiment is negative and sell when the prices are high and everyone is cheering. We will look for gold to stabilize around the 200-day moving average and rally from there in the coming weeks. Stay tuned for further updates.