The gold price is showing strength heading into the close of 2016. The gold price has advanced for five straight days and is back above $1,150. The price put in a double bottom around $1,125 during December and the recent really suggests this may have been the bottom. After taking out $1,150, the gold price steadily climbed above $1,160 per ounce today. 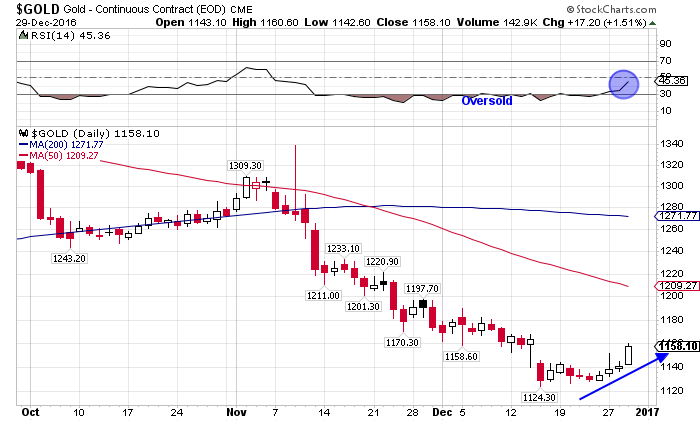 The relative strength index (RSI) has been oversold for six weeks and finally bounced higher over the past few days. At a reading of 45, it still has plenty of room to run higher. Of course, the gold price still has a mountain to climb before confirming a near-term bottom. Most importantly, the price needs to climb above $1,200. This price level was resistance in 2015 and support multiple times in 2016. It is also the 50-day moving average and roughly corresponds with the Fibonacci 50% retracement of the 2016 advance from $1,045 to $1,378.

Mining stocks are soaring today and offering extreme leverage to the move in gold. While gold was up 1.3% today, the Gold Miners ETF (GDX) was up a remarkable 7.5%. Over the past 5 days, gold is up 2.2%, while mining stocks are up 13.9%. This represents leverage of more than six times! I believe it is a sign of things to come as the entire sector continues to rally strongly during the first quarter of 2017. 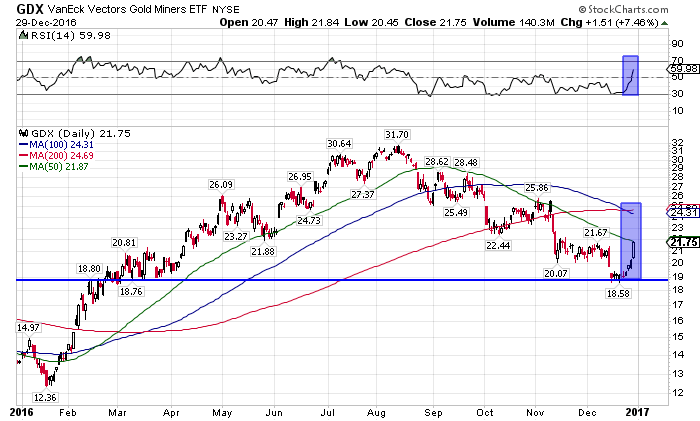 The chart for GDX shows the sharp bounce off $18.50 to $21.75 over the past few trading sessions. This support level was both support and resistance earlier in the year and also the 50% retracement of the H1 2016 advance. Therefore, we view the bounce off this level as significant and encouraging for those invested in gold mining stocks.

The Gold Miners ETF climbed towards the 50-day moving average today, but still needs to climb above $24.50, where the 100-day and 200-day averages converge, to confirm our bullish outlook. The RSI is pointing higher with room to run, so we believe this rally in mining stocks is just getting started and will extend throughout Q1 of 2017.

Part of the move higher today could be related to the fact that President Obama ordered 35 Russian diplomats expelled from the country and closed two Russian compounds. Obama gave those individuals and their families just 72 hours to leave the United States.

The justification he gave was Russian hacking of the Presidential election, but his administration has yet to provide any conclusive evidence of such hacking. This move on the part of the Obama administration is sure to illicit a response from Russia and escalation of the conflict. They have already made it clear that any sanctions would be met with retaliation.

Furthermore, Putin’s press secretary said the U.S. restrictions won’t be left unanswered by Moscow. Peskov promised “adequate, reciprocal” reaction “that will deliver significant discomfort to the US side in the same areas.”

Hopefully President-elect Trump will be able to smooth things over and repair relations with Russia. No matter what you think of Putin, it is best to work together and have diplomatic relations with other nuclear powers. Putin recently lamented that the United States and Russia no longer have any open diplomatic lines or cooperation militarily due to hostile actions of the Obama administration.

Going into 2017, we fully expect gold to exceed the performance of 2016 and climb well above $1,500 per ounce. Mining stocks have given back roughly 50% of their massive H1 2016 gains. We believe this pullback in precious metals is overextended and that prices are due for a bounce.

Investors have been overly-optimistic about the equity markets since Trump’s election, thus inflating the risk-on trade beyond rational levels. Trump’s policies will take time to enact and there is only so much that a President can do to impact economic growth. Stocks valuations are very frothy and precious metals are oversold at current levels. This is likely to flip soon and we believe that today could mark the beginning of the next major rally in gold and silver.

We believe investors should take advantage of the dip in precious metals and load up on undervalued mining stocks before the next major rally. We track the progress of over 100 mining companies, looking for opportune times to enter positions ahead of bullish catalysts. This has led to the GSB portfolio racking up gains in excess of 70% this year. To follow our trades, view our portfolio and get the monthly contrarian newsletter, click here to sign up for just $95.