In the Previous Three Weeks:

The following graph shows that total debt rapidly increased every year. As more currency – debt – is created, every existing dollar is devalued. Consequently the prices for stocks, housing, books, beer, food, gold and silver increase. Devaluation of the dollar has been “the name of the game” since 1913. 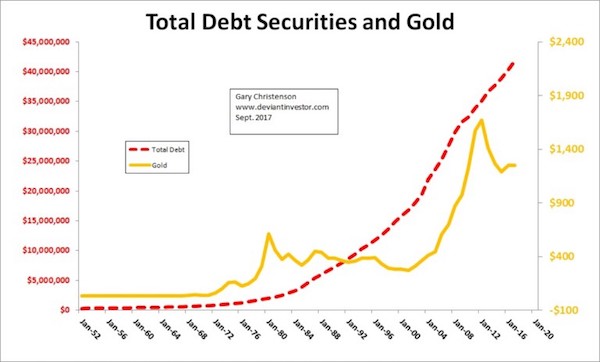 Total debt has increased more rapidly than gold prices. Take the price of gold and divide it by the total debt to obtain the ratio of the gold to debt. 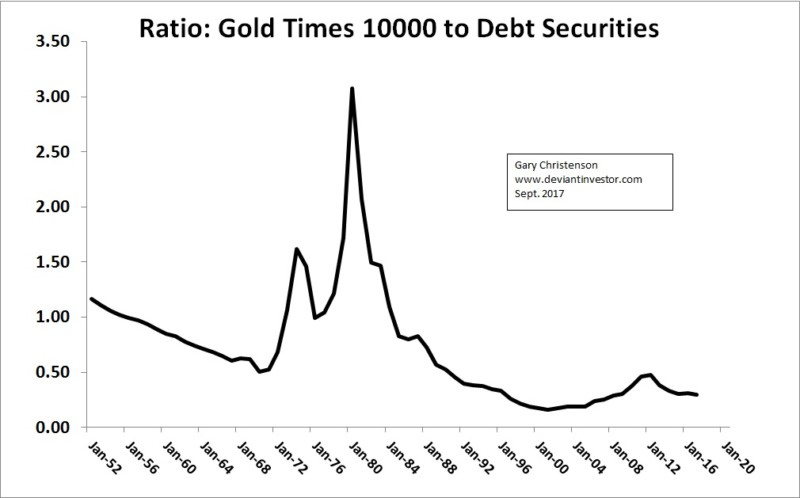 The graph shows that over the past 60 years debt has increased more rapidly than gold with the exception of the “stagflationary” 1970s. Population increases account for some of the debt increase but out-of-control spending is the primary force. Many people believe that debt is excessive and exploding higher.

WHEN ALL OPTIONS ARE BAD:

Not all problems can be solved with existing thinking, political structures, resources and technology. A few come to mind:

CENTRAL BANKING:  Supposedly central banking improves the financial and banking systems but many have observed that the beneficiaries are the political and financial elite. The middle and lower classes suffer negative consequences from central banking, QE, devaluations, consumer price inflation and market manipulations. Is there a solution?

MASSIVE UNPAYABLE DEBT:  The world owes in excess of $200 trillion in debt. Unless debt can exponentially increase forever (it can’t), a reset is coming. The debt must default or be paid in deeply depreciated fiat currency units. Both options are destructive. Perhaps there is no solution to the problem of unpayable debt given existing political and financial systems.

PENSIONS:  Many reports have demonstrated that federal, state, city, and corporate pension plans are currently underfunded and becoming more underfunded each year. Ask the Chicago Police! Given that bonds and stocks are at or near all-time highs the underfunding will worsen during the next recession/correction/crash. Perhaps the pension crisis is unsolvable with existing political and financial systems.

AFGHANISTAN: The war has persisted for a decade and a half. Afghanistan has been called the “graveyard of empires.” The war is costly and accomplishes what?  When is it appropriate to declare victory and go home?

GANGS IN CALIFORNIA:  Reports indicate that the City of Sacramento will pay gangs to remain peaceful. Are other options so bad that the City will subsidize gangs?

WHAT IF NO SOLUTIONS EXIST?

Problems with no easy solutions are always costly. More spending creates larger deficits, which means more borrowing and more debt. Each existing dollar (euro, yen, pound) is devalued and currencies purchase less as debt increases. Prices rise. Butter no longer costs $0.37 per pound as it did in the 1930s. Gasoline no longer costs $0.25 per gallon as it did in the 1960s. The DOW has exceeded 22,000, unlike its peak of 1,000 about 50 years ago.

CONCLUSIONS:  Unsolvable problems exist. They will be costly.