How NOT to Invest in the Gold Market

Investor psychology is an interesting phenomenon to study. Despite the obviously negative implications, a large percentage of investors have a tendency to buy high and sell low. When the price has been rising and everyone is bullish, they decide to jump in near a top. When prices are dropping sharply and everyone is selling, they get fearful and decide to exit their positions near the bottom.

Herd mentality, or mob mentality, describes how people are influenced by their peers to adopt certain behaviors, follow trends, and/or purchase items.

Investors like making money, but hate losing money a lot more. The good feeling of a 50% gain is not nearly as intense as the bad felling of a 50% loss. This is why when there is a large drop and money is lost (on paper), investors are shy about buying more and freeze up at exactly the moment they should be buying. Still feeling the sting of a decline, investors rush to exit their positions for fear of losing more, regardless of the fundamental and technical factors. 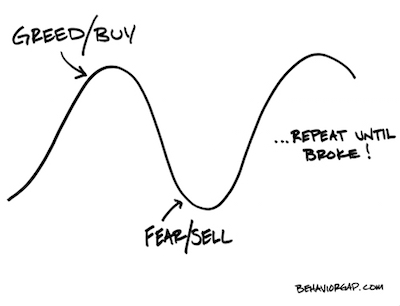 Human emotions have a huge impact on the markets, distort prices and create opportunities. In poker, players that do not allow their emotions to get the best of them (avoiding tilt) are almost always going to outperform emotional players. It is the same in the investing world. The more you are able to invest as a rational, fact-based, data-based investor and less as an emotional being, the more success you are likely to experience. This means being able to go against the herd, avoiding any feelings of discomfort from not going with the crowd and aligning with your peers.

Another interesting phenomenon I have observed with gold investors is emotional paralysis. Rather than emotions encouraging them to buy at tops and sell near bottoms, their emotions keep them out of the market entirely. Their fear always comes up with a reason not to participate and forces them to stay on the sidelines at precisely the wrong times. 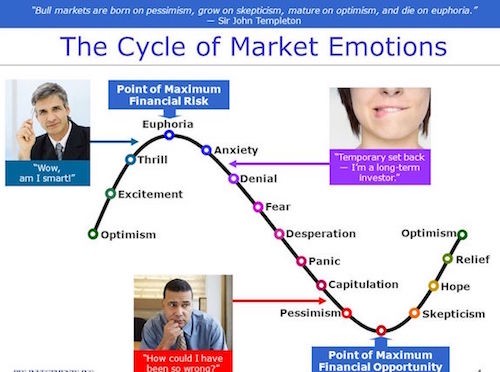 For example, many investors feared that gold would drop below $1,000 and maybe fall as low as the $700 price point that people like Harry Dent were predicting. So, those investors did not buy when the price started showing signs of bottoming around $1,050 to $1,100. When the price began moving higher in January, they still watched from the sidelines, waiting for some definitive confirmation that prices would continue climbing higher.

Soon, gold climbed 10% higher, but their fear convinced them it was just a dead-cat bounce. Then gold climbed roughly 20% and silver nearly 30%. Many mining stocks doubled, yet these investors remained on the sidelines. But they did it for a different reason. Now it wasn’t because they feared gold would drop to $700, but because they feared that they had missed the move higher and that the gold price couldn’t possibly continue climbing.

But prices did continue to move higher, with gold eventually climbing above $1,300 and silver above $18. Quality mining stocks provided leveraged gains, with several miners rocketing 200% to 300% since the start of 2016.

Fearful investors missed this entire move and lamented their inaction from the sideline. They now commented that if only precious metals would pull back, they would be able to buy on the dip and get better prices.

These levels proved to be a short-term top and prices have now pulled back considerably with gold at $1,220 and silver at $16.20. The correction that fearful investors had been wishing for has occurred, yet they still will not buy. Why not? Because gold and silver could continue lower and short-term sentiment appears bearish.

And when gold prices finally bounce, they will once again fear it could be the dreaded dead-cat bounce? So they wait for prices to continue higher, which often happens very rapidly. By the time they finally work up the nerve to buy, prices are back where they were when they were considering buying but wanted to wait for the dip. You know, the dip that just occurred in front of their eyes? This is investor paralysis in a nutshell.

Buying the Dip in Gold

Tuesday was undeniably brutal for gold investors. Some of our favorite mining stocks were down 10% or more in a single day. There is a bit of blood in the streets and it could certainly get worse. Timing short-term movements in such a volatile and manipulated/leveraged market is nearly impossible. So, what is a gold investor to do?

As a veteran of multiple gold bull and bear markets, I try to keep my emotions in check and avoid panic selling. At Gold Stock Bull, we booked profits on a few profitable positions a couple of weeks ago. But we are holding core positions and looking to add new positions on this dip.

I know that I will not be able to time the bottom perfectly, so I buy in tranches. I may put 1/3 of my available cash to work this week, 1/3 next week and 1/3 the following week. Using the approach I reduce the risk that I will mis-time my new purchases while also increasing the odds that I pick up some shares at an intermediate bottom.

I also try to maintain perspective by remembering that although we have given back some gains this week in our remaining position, many of these stocks are still up over 100% year to date. Fearful investors can only see the day’s losses and focus on the short-term. They are feeling the pain of the loss and losing perspective on the long-term investment strategy and trajectory for the gold price.

I’ve had a few subscribers ask if my confidence in the medium and long-term bullish outlook for precious metals has been shaken.

It has not. These types of pullbacks are a healthy and normal part of any new uptrend. I don’t believe the FED will be able to hike interest rates in June. They might do so by the end of 2016, but even then it will only be a move of 25 basis points. Anything more and they risk throwing the equity, bond and real estates markets into a tailspin. The FED knows this, but they like to keep the markets thinking that the economy might be healthy enough to raise rates significantly. It is not. 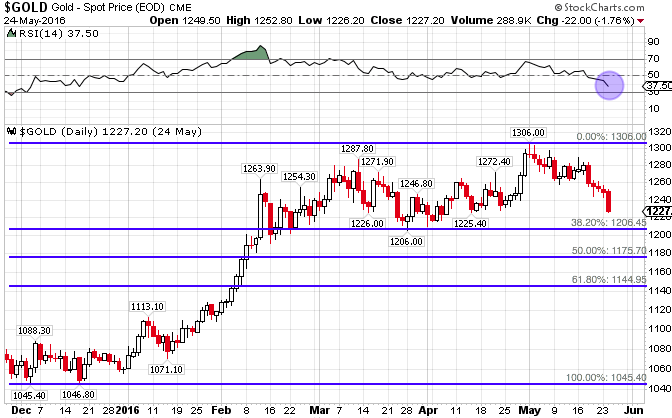 When the FED fails to raise rates in June, the market will realize that precious metals were incorrectly sold off in anticipation of this phantom rate hike. There will be an upward revaluation of gold and silver prices. This bounce will be even more pronounced in mining stocks, which have been offering leverage of 3X the move in the underlying metals this year. They may pull back 20-30% during this correction, but are likely to rocket to new highs in the second half of the year.

So, I believe it is wise to buy this dip in tranches with the expectation that both gold and silver will make new highs during the back half of the year. The FED meets on June 14-15 and I would be very surprised if they were able to raise rates. But we should also keep in mind that a 25 basis point increase is fairly insignificant in the grand scheme of things. And even if they raise rates, gold has a fairly strong history of advancing alongside interest rates.

It is usually the fear of rising rates that can hurt the gold market much more than the actual movement of rates higher. This was evident as the gold price finally rocketed higher just after the FED announced the first rate hike in December. The market didn’t care. If anything, the bounce in gold and silver prices showed that market participants were relieved of the constant speculation and indecision over interest rates.

I think the same thing is likely to happen again, should we see another rate hike. And if the FED balks, I would hope investors would start to realize that the rate hike game is just a psychological strategy aimed at manipulating investors and not honest policy decision. Which raises the larger point of why we have a small group of bankers fixing rates rather than allowing the free markets to naturally find the proper equilibrium. But that is a whole separate article.

Since the beginning of this advance in precious metals in late December, we’ve had two relatively short and shallow corrections. This once has been a bit more severe, but I believe it will turn out to be a buying opportunity. To maintain some semblance of sanity, gold investors are encouraged to take a long-term view and not stress the daily or weekly volatility inherent in this market. Buying near multi-year lows, just above the cost of production, is not likely to be a bad move.

In summary, here is how NOT to invest in gold:

Of course, this is all easier said than done. But hopefully if you are part of the ‘buy high, sell low’ crowd, this will encourage some reflection on your investment strategy and the dominance emotions have over your investment decisions. If you want to follow when we are buying or selling, which stocks we hold and the steps we are taking to maximize profits, click here to become a Gold Stock Bull Premium Member.

It is less than $1 day and we offer a 30-day money-back guarantee. If you don’t find value in the service, just ask for a full refund and keep all of our stock picks and special reports for free!