How to Invest in Agriculture

World food prices reached their highest level ever recorded in January and are set to keep rising for months, the UN food agency said on Thursday, warning that the hardest-hit countries could face turmoil. Investing in the agriculture sector can help capitalize farms and fertilizer producers, increase food supplies and generate some pretty hefty profits in the process. If your portfolio does not have exposure to the agriculture sector, what are you waiting for?

In its latest survey, the Food and Agriculture Organization said its index which monitors monthly price changes for a variety of staples averaged 231 points in January — the highest level since records began in 1990. This is driven by increasing demand from developing nations with growing populations and also from severe weather conditions in agricultural areas of China, Russia and elsewhere. Lastly, it is being driven by quantitative easing and inflationary policies by governments and central banks worldwide. This confluence of forces has pushed food prices to record highs and the prices are likely to continue much higher, a theme repeatedly warned by legendary investor Jim Rogers over the past few years.

The first and most widely known method is using the PowerShares DB Commodity Index Tracking Fund (NYSE: DBA). However, it is my least favorite option. First off, the fund has underperformed other methods discussed below. But there are also moral and ethical implications to investing in this fund. It is based on the Deutsche Bank Liquid Commodity Index Diversified Agriculture Excess Return™ and is a rules-based index composed of futures contracts on key food products such as wheat, corn, soybeans and sugar.

While the futures markets can often be helpful in price discovery, they can also serve to artificially inflate prices of their underlying commodities, particularly when investors use leverage to stake out much larger positions than their actual investment warrants. If these speculations translate to higher food prices, it obviously has a negative consequence to thousands of the world’s poorest people, especially in regions where over 50% of income goes towards food. This will not factor into the equation for all investors, but it makes DBA less attractive to me personally.

Another popular vehicle for gaining exposure to the agriculture sector is the Market Vectors Agribusiness ETF (NYSE:MOO). This ETF replicates as closely as possible the price and yield performance of the DAXglobal Agribusiness Index (DXAG). DXAG is a modified market capitalization-weighted index consisting of publicly traded companies engaged in the agriculture business that are traded on global exchanges. DXAG provides exposure to companies worldwide that derive at least 50% of their revenues from agriculture business and have a market capitalization exceeding $150 million. DXAG comprises five major sub-sectors, including agriproduct and livestock operations, agricultural chemicals and equipment, and ethanol/biodiesel.

The top four holdings of the MOO ETF are listed below. You will get diversification from this ETF, but many investors may prefer to pick and choose amongst some of these top holdings. Additionally, while I generally feel better about investing in companies that support the agriculture business than futures contracts on the actual food, the #3 holding should give conscious investors cause for concern.

Monsanto has to be one of the most unethical and shady companies operating today. They have been creating genetically-modified seeds with questionable safety and strong-arming farmers into using only their seeds, which have a built-in function where the resulting crops will not create new seeds for the next harvest seasons. You don’t have to take my word for it, the dirty details on Monsanto are documented in Food Inc, The Future of Food, The World According to Monsanto and various books and online resources.

About 93% of world potash consumption is used in fertilizers. Potash is important for agriculture because it improves water retention, yield, nutrient value, taste, color, texture and disease resistance of food crops. It has wide application to fruit and vegetables, rice, wheat and other grains, sugar, corn, soybeans, palm oil and cotton, all of which benefit from the nutrient’s quality enhancing properties.

One of the companies held by the MOO ETF listed above is Potash Corp (POT). The company is the world’s largest potash producer and the second and third largest producer of nitrogen and phosphate, three primary crop nutrients used to produce fertilizer. The stock is up 73% in the last six months alone, but I believe the share price is likely to continue much higher.

There are also a number of up-and-coming junior potash miners that provide a greater risk/reward profile. One of my favorites is Allana Potash(CVE: AAA or ALLRF), which I recommended to premium members at $0.76, just before it climbed nearly 200% in just two months. I wrote a free article last month entitled “Top Agriculture Pick for 2011 – Allana Potash,” which goes into detail behind the company and their project in Ethiopia.

Other junior potash miners include Encanto Potash (CVE: EPO) and Western Potash (TSE: WPX), although I still believe Allana Potash has the greatest upside potential and will be attractive on any dip to $1.50 or lower.

A less known method to invest in agriculture and one of my favorite is the Sprott Resource Corp (TSE: SCP or SCPZF), run by well-known precious metals investor and fund manager Eric Sprott. In addition to agriculture, the company has exposure to gold, energy and uranium, making it a diversified play.

In addition to these current investments, which have all appreciated significantly, Sprott has one completed investment in PBS Coals, which they bought for US$55 million and sold for CAN$240.7 million. If this type of track record continues, an investment is Sprott Resource Corp should prove very lucrative to your portfolio.

The agriculture part of this play that we are focusing on comes from both Stonegate Agricom (TSE: ST) and One Earth Farms. Stonegate is in the fertilizer business and is currently focused on the development of two potentially world-class, long-life phosphate deposits, the Mantaro Phosphate Project located in Peru and the Paris Hills Phosphate project located in Idaho. Stonegate is confident that the two deposits have sufficient size and grade and are in the right locations to become strategic, cost-effective sources of phosphate supply for major fertilizer producers. The Company intends to conduct definition and exploration drilling to confirm and expand estimates of NI 43-101 compliant mineral resources and reserves in the deposits and then complete feasibility studies leading to a decision to proceed with extracting and processing of phosphate and both of their properties have proven historical merit. This far Sprott’s option agreement totaling $53,000 has turned into a mark-to-market gain of over $100 million in just a few short years. Stonegate’s stock is up 160% in the last six months.

One Earth Farms has synergistic cattle and grain operations. Its real goal is to become a fully integrated farm operation and change the typical farming model. Instead of the farmer buying retail and selling wholesale, One Earth has scaled to be able to buy wholesale and is working on a model that will allow the company to capture some of the retail margin by partnering with food processors or retail outlets. There are very few corporate farms in which to invest around the world and with rapidly rising food prices, an improved business model and backing by Sprott, One Earth seems on track for great success. The company is currently privately owned and does not trade on any exchange, so buying Sprott Resource Corp is your only option, other than private placement if you qualify, to get exposure to One Earth.

One Earth Farms is, in our minds, the only way you can invest in Canadian farming in a large way. That’s because it is in partnership with the First Nations groups of Canada, which are federally regulated and permitted to allow public companies and foreigners to lease land. Typically, non-First Nations lands in Manitoba and Saskatchewan are restricted under provincial law from public company ownership or leasing or foreign participation.

I think that One Earth Farms is a company that ultimately will be highly valued and coveted by three different types of investors. First, large pension funds might find it very desirable for the inflation protection it could provide pension fund holders. Also, I think that the sovereign wealth funds and the Ag ministries of the world that are trying to get food security for their nations would find this to be very strategic. Lastly, we feel it would be valued by ordinary institutional and retail investors if it were publicly listed.

As the population continues to grow rapidly past the 7 Billion mark, governments worldwide continue printing and debasing their currencies and weather conditions remain volatile and ill-suited for healthy harvest, food prices are likely to continue much higher. If you would like to receive my monthly newsletter and stay abreast of which agriculture investments I am buying and selling, click here to become a Premium Member.

As a premium member, you will also get access to our “Guide to Purchasing Income-Producing Farmland,” which details strategies for profiting from inflation with agricultural land. 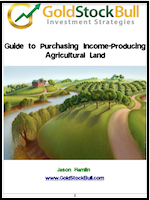