How to Invest in Rare Earth Metals

The following is an excerpt from the Gold Stock Bull Newsletter, which is available to Premium Members along with access to the GSB Portfolio and email trading alerts that are sent out any time we buy or sell. To become a Premium Member and receive full access, click here.

I haven’t been nearly as excited about the investment opportunities in a new sector as I am about rare earth metals at the current moment. Demand for rare metals has been exploding and few new mines are coming online in this geographically-concentrated sector. 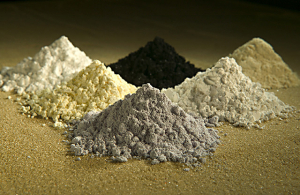 Rare earth elements or rare earth metals are a collection of seventeen chemical elements in the periodic table, namely scandium, yttrium, and the fifteen lanthanoids. The use of rare earth elements in modern technology has increased dramatically over the past years. For example, dysprosium has gained significant importance for its use in the construction of hybrid car motors. Unfortunately, this new demand has strained supply, and there is growing concern that the world may soon face a shortage of the materials. This is where the investment opportunity unfolds.

The story of rare earth metals is mostly one of China producing and exporting while Japan, America and everyone else is importing. Rare earth metals are vital to new technologies such as iPhones and flat screen televisions, green energy technology such as wind, solar and geothermal and critical to the future of hybrid and electric cars. Rare Earth Elements and Heavy Rare Earths are a strategic choke point held in China’s hands as they produce 95% of REEs. Lately China has been squeezing that choke point, which could lead to declining worldwide supply and skyrocketing prices. This has Western governments worried, as the rare earth metals are also key to high-tech military applications. An article from the Telegraph reports on draft plans in China to restrict exports of rare earths:

“Beijing is drawing up plans to prohibit or restrict exports of rare earth metals that are produced only in China and play a vital role in cutting edge technology, from hybrid cars and catalytic converters, to superconductors, and precision-guided weapons. A draft report by China’s Ministry of Industry and Information Technology has called for a total ban on foreign shipments of terbium, dysprosium, yttrium, thulium, and lutetium. Other metals such as neodymium, europium, cerium, and lanthanum will be restricted to a combined export quota of 35,000 tonnes a year, far below global needs.”

Of course, there are two sides to every story as pointed out in this article regarding China and its plans to restrict export of rare earth metals.

Rare Earth Metals have held up well during the financial crisis, as they aren’t exchange traded commodities and aren’t subject to speculative trading like gold, silver and other metals. This removes much of the manipulation concern that is pervasive throughout the precious metals investment community and documented exhaustively by GATA. With REEs there is no more fretting over investment banks holding short positions that are greater than all of the gold or silver produced in a year or the IMF attempting to suppress prices by leasing gold that they don’t own. Whether or not you buy into the manipulation argument, rare earth metals offer relief from this form of unfair play. The pricing is largely determined by supply/demand fundamentals in the free market, which are strong for rare metals and expected to only get stronger.

Rare Earth Metals have been getting an increasing amount of attention from the press lately, with the NY Times international business editor discussing REEs on “World Focus.” The video is titled “China Rides Green Revolution, Limiting Export of Rare Metals,” and can be viewed below.

My favorite play in this sector is Avalon Rare Metals (TSE: AVL or PINK: AVARF). Their project at Thor Lake in Canada has global importance with its ability to offer NAFTA access to rare earth metals for decades to come. As Western nations move to reduce dependence on foreign oil from unfriendly countries, I believe there will be a significant increase in demand for the rare earth metals used in electric cars, wind turbines and thin film solar cells. This should benefit Avalon substantially and be reflected in their share price in the months and years ahead.

Avalon has returned very high-grade drill results and their Thor Lake deposit has high concentrations of heavy rare earth elements, nearly double the typical concentration. Click here for an audio interview with Don Bubar, Director, President and CEO, of Avalon. You get immediate confidence that Avalon’s top executive knows the industry, is modest in his assumptions, has a plan to production and is a competent hand at the wheel of this company.

Canada’s CBC News also did an expose on Avalon Rare Metals recently, which I encourage you to view below or by clicking here.

In addition, Avalon produced a very interesting and informational video on the uses of rare metals in technology today. Avalon’s flagship project at Thor Lake was also featured by APTN Economic Changes in a “greener way of doing business.”

You will notice that despite the recent run up in Avalon’s share price, these videos only have a few hundred views, suggesting that mainstream investors are still not aboard the rare earth metals train. In my opinion, there is still huge upside potential in this sector and in companies such as Avalon in particular. Let’s take a look at their stock chart to get an idea of just how strong recent performance has been. 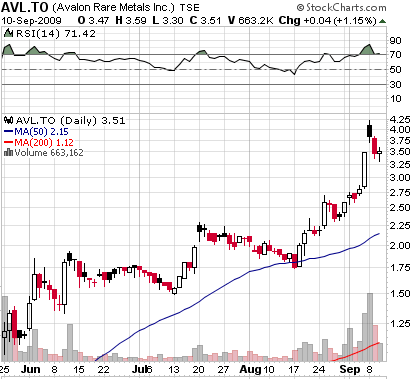 Avalon has no doubt had an impressive run over the past few months, more than tripling in price. The charts show extremely volatile trading with a series of sharp gains followed by longer declines that tend to give back about 50% of the gain. But in the last two series of advances, the unwinding after the run up has been very brief and consistently led to higher highs. Still Avalon appears overbought at the moment and I would like to see the stock price correct to the $3.00 level before establishing a new position.

We notified premium subscribers about Avalon last month and originally bought shares at $2.30 and sold at $2.76 for a gain of 20% in less than two weeks. While I was anticipating a pull back, the stock price continued higher another 40% or so before finally experiencing some profit taking. We are currently waiting for a the stock to enter our buying range in anticipation of further strength into the end of 2009.

While Avalon is our preferred way to benefit from higher rare metals prices, there are a few other companies worth consideration:

A final word of caution: While it might be true that mainstream investors have yet to jump aboard the rare metals bandwagon, prices for many of these explorers have shot up dramatically in recent weeks. Prices could continue higher as the story of rare earth metals is disseminated and more investors jump in, but some are already calling this sector “The Next Big Investment Bubble.”

As we have learned in the past, bubbles tend to pop much more quickly than they were inflated, leaving the latecomers holding the bag and swimming in red. Demand is also predicated to some degree on a continued economic recovery. If the bottom drops out of the stock market again, which I expect will happen within the next year, rare earth prices could come under pressure.

So it is wise to proceed with caution, use stop orders to limit losses and book profits after big runs. Only time will tell if rare earth metals are indeed the next big thing or just another over-hyped fad.

Disclosure: I own shares of Avalon Rare Metals and Western Lithium. I never receive compensation to write about companies as I find it unethical and there is a clear conflict of interest in doing so. I believe in the companies that I profile and usually have my own money riding on their success.

If you would like to receive our investment insights before they are published to a larger audience, sign up for our premium membership. You will be able to view the Gold Stock Bull Portfolio in real time, receive email trading alerts whenever we buy or sell and receive the monthly newsletter (click for sample). The GSB Portfolio is up 125% since the start of 2009, with a record of 28 profitable trades and 16 losing trades. Join Now!