Is It Time to Buy the Dip in Bitcoin? 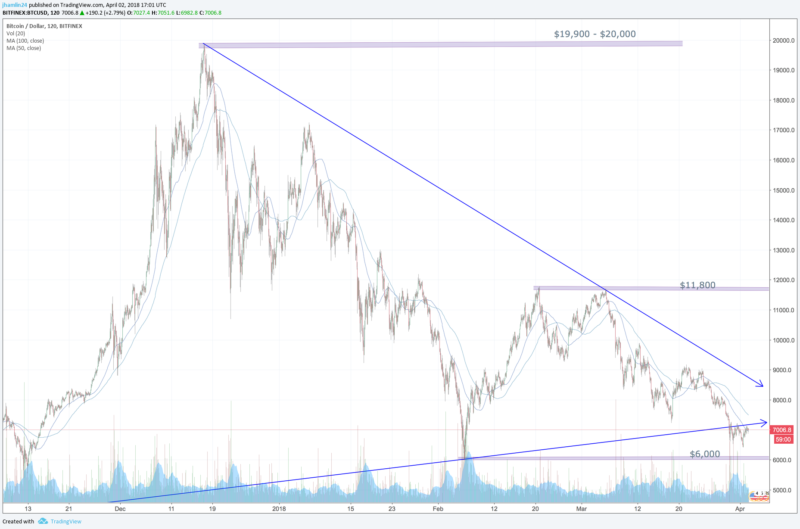 The main drivers of this price decline have been:

Tax season will be over in two weeks and most cryptocurrency traders that sold to raise funds for taxes are likely done selling. The Mt Gox trustee may be done selling for the time being, as he raised enough fiat to satisfy the bankruptcy demands. The ban on advertisements created short-term FUD (fear, uncertainty and doubt), but shouldn’t have too large of an impact on prices moving forward. To the extent that the ad ban helps to weed out the fraud, it could actually benefit the cryptocurrency market as a whole.

Large banks are parasitic legacy institutions on their way out, so this type of fighting against crypto should come as no surprise. They realize the threat that crypto and blockchain poses to their business models and profitability. Cryptocurrency innovation has given people an alternative to dealing with large financial institutions with a history of corruption, fraud and squeezing every last penny they can from their customers. Remember, we are talking about the too-big-to-fail institutions that took wild gambles on derivative instruments, caused the 2008/09 financial crash that devastated millions of middle-class and poor around the globe, and then received the largest taxpayer bailout in history when their bets soured.

They did this despite receiving favorable treatment from the government, having access to unlimited near-zero money from the central bank and all while paying their executives exorbitant compensation packages. Despite the financial damage and several instances of fraud and criminal activity, banking executives escaped any prosecution. So, it should come as no surprise that people would look for alternatives to using these banking establishments.

The excessive speculation is largely gone from the markets now, following the correction of nearly 70%. The latecomers that jumped on the bandwagon after seeing bitcoin on their favorite financial program have likely sold and cursed off this market for the volatility and losses they suffered. I believe we are back to mainly strong hands that bought at much lower prices or bought for ideological reasons and aren’t likely to sell. This is precisely when we tend to see bottoms and I expect a sharp rebound in cryptocurrency prices following tax season.

Negative news usually sends investments lower and positive news usually pushes prices higher. But in the case of the cryptocurrency correction of 2018, it occurred despite a flurry of mostly bullish news. Sure, there will always be regulators somewhere in the world making threatening comments or trying their best to maintain control of their citizenry, but overall the sector has received favorable news in 2018.

U.S. regulators signaled they will largely be taking a hands-off approach other than going after initial coin offerings (ICOs) that are scams. The white house stated crypto regulations are not coming anytime soon. Congress issued a bullish report on the benefits of blockchain and CFTC employees were granted permission to trade cryptos.

Bitcoin has largely solved its scaling issue, with Segwit/Lightning implementation resulting in nearly instant transactions for pennies. New cryptocurrencies have created technologies that surpass the transactions per second possible with Visa/Mastercard.

There are multiple Bitcoin ETFs seeking approval, which is likely to be bullish as it opens the doors to institutional investors and would generate real demand for coins, unlike the futures markets. One need only look at what happened to the gold price following the introduction of the first gold-backed ETF to get an idea of what might happen to the Bitcoin price. Coinbase is also launching a crypto index fund, which is likely to attract new investors into the space.

Despite banning crypto ads in order to weed out scams, Twitter’s CEO stated that he believes Bitcoin will be the world’s sole currency. Ford is looking to crypto payments between vehicles to encourage better driving and reduce traffic congestion. IBM announced more blockchain projects in the works.

Bank of America and JPMorgan Chase admitted in their annual reports that cryptocurrency is a threat to their business. A Goldman Sachs funded company bought crypto exchange Poloniex for $400m and HSBC is embracing crypto via piloting live blockchain payments.

It is estimated that 5% of people in the United States own any cryptocurrency and less than 2% globally. These numbers might have dropped during the correction of the past few months, but is still gives some perspective on how early we are in the adoption phase. Technologies are pushing forward and real-world use cases come out everyday, but blockchain development and the full potential of cryptocurrency is just getting started. 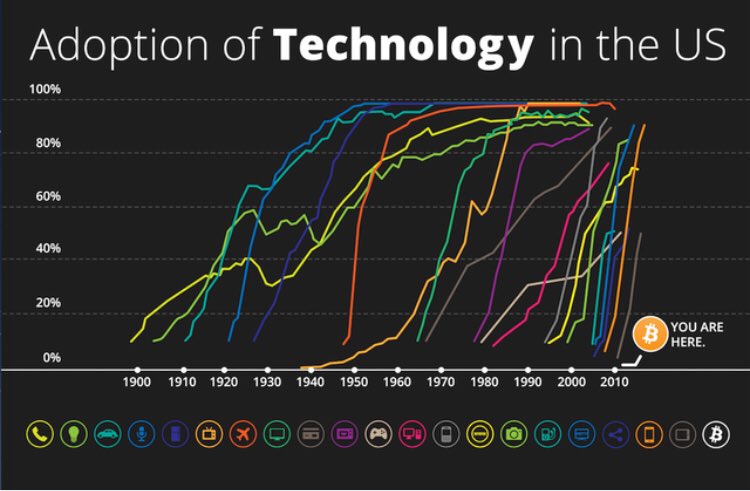 It should also be noted that this is not the first time the market has undergone a correction of this magnitude. There was a 90% correction in the back half of 2011 and a 70% correction in late 2012 and a 85% pullback during the bear market of 2014. In every case, the market rebounded and went on to make new highs. 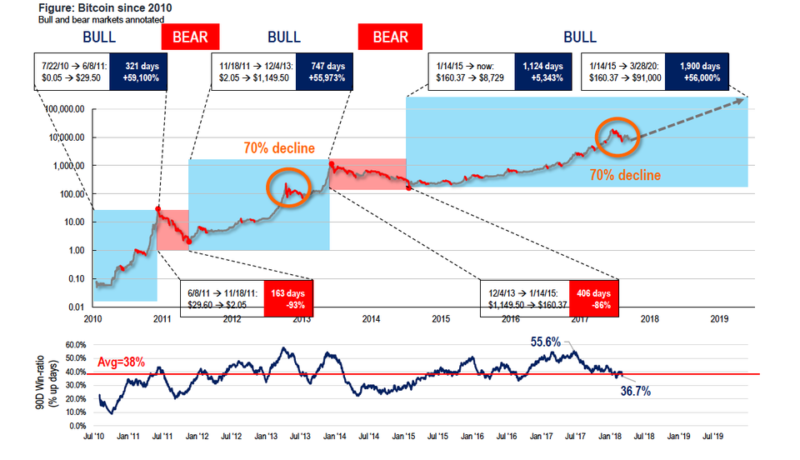 And while few people dispute the power of blockchain, many are unsure about bitcoin or other cryptocurrencies to be used as currency. But bitcoin is truly a better form of money than other alternatives. It is limited in quantity, decentralized, transparent and resistant to fraud, allows the free movement of funds around the world in a nearly instant fashion or pennies. It is free-market money that is voluntarily adopted and its value cannot be inflated away like fiat central bank money. It is not created out of debt like most money, has no interest owed on it and does not inherently create an uneven playing field and result in vast wealth inequality like fiat money. It works for the benefit of all that use it, not just a select group that used coercion to gain control of the printing press. It is more efficient to use, has lower fees for merchant and consumers and does not require trust in third parties.

I still like precious metals as a store of value, but they do not work well for everyday transactions or transferring funds across borders. Gold is not easily divisible in everyday applications and silver is not easy to store or transport. So, I think it is smart to have an allocation of both cryptocurrencies and precious metals. They are both superior to using paper money created by a nefarious centralized bank, out of debt, with interest attached, guaranteed to lose value over time and used specifically for the centralization of wealth in power in the world.

So, is it time to buy the dip in bitcoin? I believe strongly that  year from now anything under $10,000 for bitcoin will seem cheap and we will look back at this period as an excellent buying opportunity. But in the near term, the technical chart suggests that a bit more patience is warranted. Bitcoin needs to climb back above $7,250 and into the long-term trend channel to turn bullish in the near term. A test of $6,000 may still be in the cards and a likely double bottom reversal off this price level.

But in the long run, I remain convinced that the price of bitcoin is going significantly higher. I am targeting $40,000 within the next 12 months and would not be surprised to see bitcoin eclipse $100,000 at some point during 2020. The technology is here to stay, it is a better form of money, adoption and real world use cases are growing, news flow has been mostly bullish and there are a number of positive catalysts on the horizon. 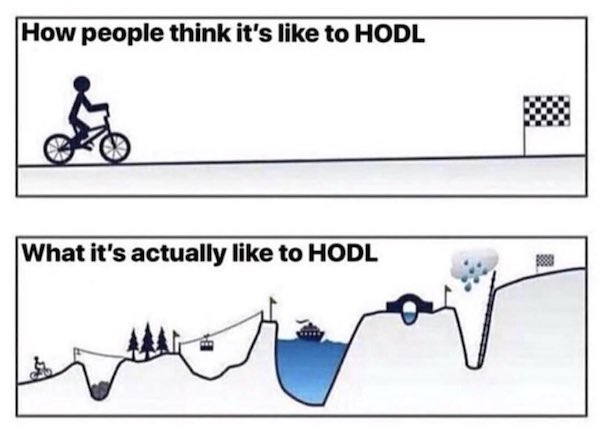 Anyone that thought it would be an easy ride in this emerging space has been taught a tough lesson. The volatility is significant and enough to shake most investors out of their positions. But it requires a certain fortitude to be able to hold through the turbulence and buy the dips. Remember, you want to buy when sentiment has turned negative and there is blood in the streets. In my view, this is precisely the opportunity we are being presented in the cryptocurrency markets at the current time. It is hard to see through the negative clouds circling above this market, but I believe it is only a matter of time before sentiment shifts and prices start rising again.

Of course, this is just my personal opinion and I have no crystal ball. Please perform your own due diligence and invest accordingly. If you want to receive our research into both the cryptocurrency and precious metals markets, you can subscribe here. New subscribers can take 50% off the trial price by using the coupon code “trial50″ during checkout.