Is the Death of the Paper Gold Market Near?

Paul Mylchreest believes that the death of the paper gold market may be near and that a run on Western gold vault’s is imminent. The following comments are from a recent presentation by Mr. Mylchreest and I thought they were important enough to reprint here.

The London bullion market “is running into a problem and is facing the biggest challenge since it collapsed from an insufficient supply of physical gold in March 1968.”

Intuitively, we think that central banks might have lent/leased gold to maintain the status quo and mask what is technically a default. If there is no gold float, there is nothing supporting more than US$200 Billion of trading every day in unallocated (paper) gold instruments which accounts for more than 95% of gold trading in London.

The convention of trading unallocated gold has been based on a fractional reserve system. It works as long as gold buyers retain confidence that the banks could deliver physical gold if demanded, but our analysis suggests that they could not.

Seeing the Achilles Heel of London’s gold market, China’s Shanghai Gold Exchange (SGE) launched a Yuan-denominated physical gold benchmark gold contract on April 19, 2016. Examining the SGE’s white paper, it’s clear that China acknowledges that its introduction should lead to a more realistic price for physical gold and that its strategy is to shift price discovery in the gold market from London to Asia.

For years, the typical pushback on investing in gold by western investors was that it had no yield. In a bizarre twist of investing, more than US$7 Trillion of bonds now have negative yields thanks to unconventional monetary policies like ZIRP/NIRP, and gold investing can be justified on a yield basis. Unlike every other financial asset, including sovereign bonds, physical gold has no counterparty risk.

The vast majority of trading in today’s gold market is in paper “facsimiles” which purport to be gold bullion, or be readily exchangeable into gold bullion, when they are not. In this category we include:

The traded amount of ‘paper linked to gold’ exceeds by far the actual supply of physical gold on the LBMA by a factor of 92 to 1.

The extreme paper/physical ratio acts to the detriment of investors in the underlying physical bullion and gold mining companies since the price is divorced from supply and demand for the actual metal. Because gold facsimiles are paper instruments, banks and others trading in the gold market have been able to add “gold supply” in an almost elastic fashion when investors increase net gold exposure via these types of instruments.

If we look at the net positions in COMEX gold futures of the Commercials (mainly banks) during the bull market from 2001-11, you can see how on the three occasions when the Net Com-mercials stopped increasing their net short position into a rising market, the gold price went parabolic. 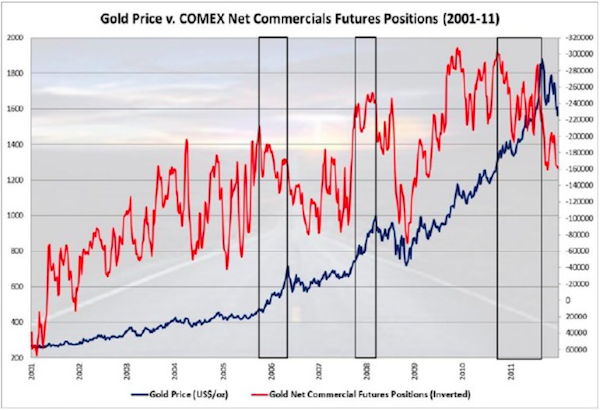 The scale of the current battle being fought by the Commercials to contain the recent price rise is only too obvious. This is the biggest battle seen in the gold market for nearly 5 years. 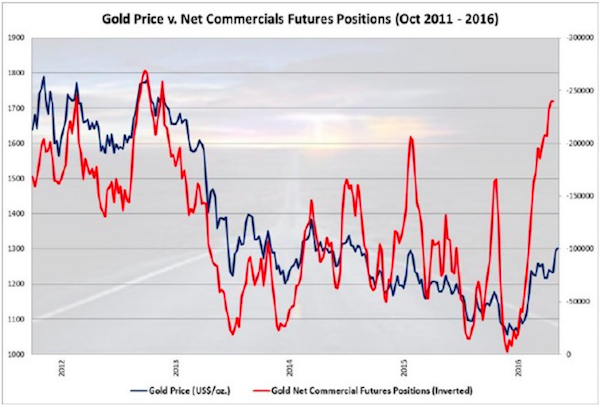 Having shown how the supply of paper gold contracts has dominated price discovery in the gold market, the status quo can only be maintained for as long as those investors who wish to take delivery of physical gold can be accommodated. Otherwise, the whole illusion will become obvious…

This takes us to the critical pre-condtion for the orderly functioning of the gold market…an adequate “float” of physical gold in London.

Given the 92:1 imbalance between paper/physical, a shift in the balance in gold trading from paper instruments towards physical could quickly destabilise the market. This is especially true when there is an average of more than US$200bn of trading in unallocated gold every day.

They launched a yuan-denominated benchmark price for PHYSICAL GOLD. The settlement process centrally cleared.  It’s an exchange unlike London and the price is for physically delivered 1 kilo 99.99 bars which is quoted in Yuan per gram. Delivery can take place at any of the SGE’s registered vaults in 36 cies with selement T+2.

There are some stark contrasts with London where the se lement process is not centrally cleared, settlement is by book entry rather than in physical metal (unless allocation is specifically requested) and the contracts are for 99.5% 400oz. “bars.”

In London, the twice daily LBMA prices are fixed at 10.30am and 15.30pm. Because of the eight hour time difference, the Shanghai benchmark prices will front run the London prices. This could be a critical point going forward and give the SGE an edge in the price discovery process.

This was Simon Mikhailovich of Tocqueville Bullion Reserve commenng to the Epoch Times last year about the new Shanghai contract:

“China is the largest producer and consumer of gold in the world. SGE…has ranked as the world’s largest physical gold exchange for nine consecutive years…”

While the London market is a fraconal reserve system…

“The SGE is the world’s largest spot gold exchange, with all trades denominated in renminbi and backed by physical gold held in SGE accounts.”

In 2015, aggregate withdrawals during the year were 2,597 tonnes, which was equivalent to more than 80% of all of the gold mined worldwide during the year.

An increase in the current tiny allocaon of the vast pools of western capital into physical gold would have a disproporonate impact on the market.

So, is the death of the paper gold market imminent?

It seems obvious that a Yuan-denominated gold price fix on a truly physical exchange is superior to the highly-leveraged speculative exchanges in the U.S. and UK.  I don’t think we will see a sudden default of the Western paper gold exchanges, but that seems to be the current trajectory. When you add in the recent admission of gold and silver price manipulation by Deutsche Bank, and their promise to rat out other banking co-conspirators, we have increased hope that precious metals will soon have free market price discovery.

If we are indeed nearing the death of the paper gold market and end of the price manipulation, this could be the last opportunity to buy precious metals at artificially-discounted prices. After a huge move during the first four months of the year, gold and silver are currently experiencing profit-taking, with prices pulling back.

At Gold Stock Bull, we believe it is wise to buy these dips while others are selling. After a 4-year correction, the recent bounce from deeply oversold levels is convincing. While we can’t rule out the potential of one more sharp decline driven by leveraged paper selling, we believe gold and silver prices are likely to continue heading higher over the next 12 months. We have now seen multiple months of higher highs and higher lows on the technical charts, which increases the odds that prices have indeed bottomed.

Mining stocks have been offering incredible leverage of 3.5X the underlying move in the metals so far this year. We have been generating significant profits for subscribers and will be using the current dip to add new positions to the GSB portfolio in May. To get instant access to the portfolio, trade alerts and newsletter, click the image below. 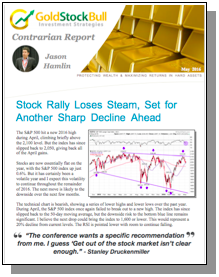