Legalization Likely to Boost Prospects of Cannabis Stocks in Canada

Legal cannabis is clearly one of the most lucrative industries in the world right now for global investors. In 2017, the sales of legal marijuana jumped by 33 percent to $9.7bn in North American market alone and because of tax cuts in America, these numbers should continue to grow. Cannabis stocks or marijuana stocks stand to benefit greatly from this growing trend.

According to ArcView, a cannabis research agency, which partnered with BDS Analytics to assess the market for legal marijuana, sales in the North American market will reach $24.5bn by 2021, representing a spectacular CAGR (compounded annual growth rate) of 28 percent.

What is fueling the interest of global investors currently is the political support that legal cannabis industry is receiving. What was once treated as a social taboo topic, legalization of marijuana is now finding overwhelming support from both people and the politicians, as shown in the results of various US polls, including CBS News, Fox News, Gallup, Pew Research, and Quinnipiac University polls

It was amazing it was ever illegal. Marijuana never caused anyone to harm their families or drive terribly like alcohol does all over the country all the time.

Given the high likelihood that Canada would soon legalize the sales and distribution of recreational weed to people above the age of 18 has led to an unprecedented surge in investor interest in this sector. Legalization in Canada might become a reality as early as this summer, which would make it the first developed nation in the world to have done so. Investors are setting their sights on the fact that legalization would open the floodgates overnight to the tune of at least $5bn in annual sales.

When you put all the pieces together, it provides a fairly clear picture of why cannabis stocks have been practically unstoppable through 2016 and 2017. 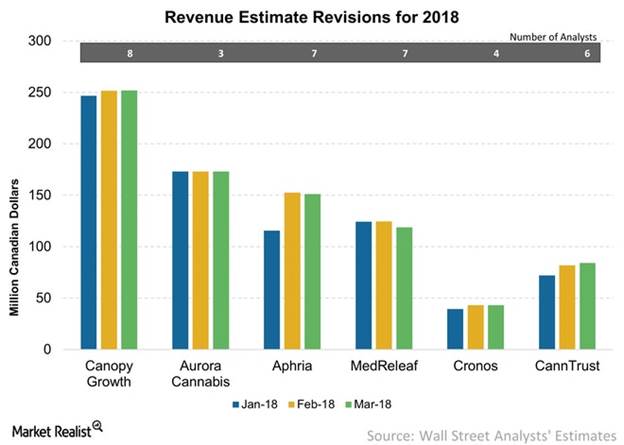 It is interesting to note that the fastest growing cannabis stock of the first quarter is a company that is not involved in weed cultivation. Kush Bottles is a small cap cannabis stock, and the company manufactures pop-top bottles and containers for weed growers. Kush also provides branding solutions to growers.

Kush price grew 22 percent at a time when virtually all grower stocks have been going down. This happened probably because of the new packaging guidelines outlined by Health Canada. The guidelines say that following the passage of Cannabis Act, tamper-evident and child-resistant packaging will be mandatory, and it should also provide an appropriate health warning.

The guideline essentially requires customization in packaging, an area where Kush Bottles is a specialist. Furthermore, the company has reported a year-over-year growth in sales of 258 percent in its Q1 fiscal report, and is already profitable when Canada’s demand for recreational cannabis has yet to kick in.

The largest cannabis stock in terms of market cap, Canopy Growth Corp. managed to buck the decline trends during the first quarter, and registered a jump of 10 percent. Strong investor optimism appears to be driving the growth of this stock. 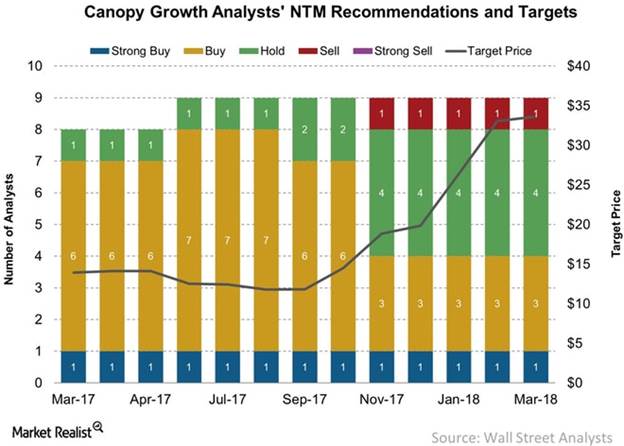 In terms of yearly production potential, partnerships and acquisitions, no other grower comes close to Canopy Growth. The company has as many as seven production facilities at present, spanning 665,000 sq. ft. It is additionally developing and constructing greenhouses in British Columbia on a land of 3.7 million sq. ft.

While the company has not revealed its yearly production potential, analysts estimate that it could be well on its way to produce over 300,000 kg, which will make the biggest domestic grower in Canada. Canopy’s brand “Tweed” is among the most recognized marijuana brands, which is backed by a solid distribution channel.

The company has multiple retail outlets to sell its product, apart from an online sales platform. Canopy has sold 9.9 percent equity stake to Constellation Brands (a leader in spirits) for $190m. This might give the company access to Constellation’s marketing prowess as well as its distribution network.

Aphria Inc. has been one of the troubled stocks this year. Furthermore, the company’s recent acquisition has been generating negative press, which is hurting the stock price. Press reports have claimed that many of Aphria’s top executives, including the CEO Vic Neufeld, had a shareholding in Nuuvera Inc. (the company it has acquired), but they did not publicly disclose those positions.

While technically this is not a violation of the OSC regulations, it is being perceived as an example of the company trying to stretch the legal borderline. Aphria came under financial pressure in 2017 following its US investments in cannabis.

The investors’ issue with the Nuuvera deal is that they are seeing it as overpriced. When you pay more than $800m for a rather minor and unknown player in the business, it is bound to raise eyebrows.

Aphria stock is now down nearly 40 percent year-to-date, and the stock price still trades at 80 times the sales. The price may still have a potential downside, but could see technical support around the current level. 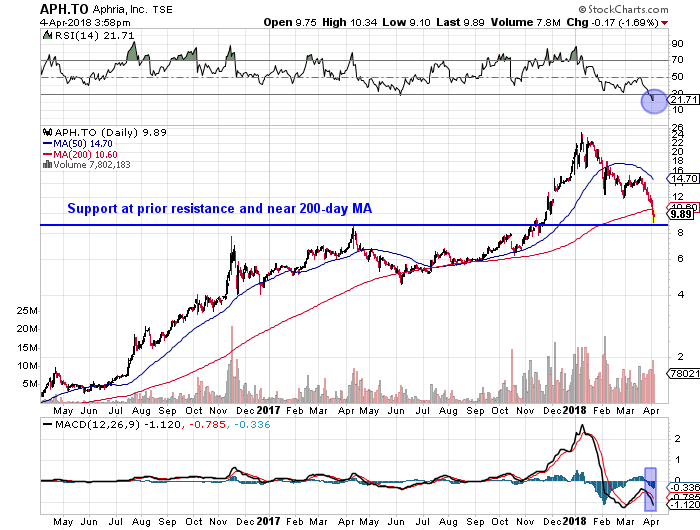 Things have brightened up for the pot industry around the world, and there is a worldwide shift from the days of locking up dealers to public support and legislation for cannabis legalization. According to the Chicago research firm Brightfield Group, the legal weed industry is estimated to generate annual sales of $31.4bn by 2021. This is better than this money going to degenerates and gangsters.

Canada first permitted legal access for medical marijuana way back in 1999. However, it took another decade and a half for the government to change the regulations and make it easier for businesses to enter the cannabis market. Taking a cue from Canada’s affirmative action, at least 20 other countries and 29 states in the US have followed suited.

Now the world is poised to accept legalized recreational cannabis. In the US, 9 states and DC have taken positive steps already. Canada in 2018 is set to become the first country to legalize recreational pot after Uruguay in 2017. Canada already has the biggest number of “cannabis unicorns” (publicly traded corporations worth at least $1bn each). The stock exchanges in Canada host more than 85 cannabis companies, having a combined market cap of C$30bn.

Medical marijuana businesses across the US that follow local and state laws shall remain protected from federal drug agents and the beleaguered US Attorney General Jeff Sessions. This is ensured under a provision in a new legislation.

The policy since 2014 has been that the US Department of Justice cannot spend money to interfere with the enforcement of state-wise medical marijuana laws. However, the continuance of this policy came under a cloud when Sessions asked Congress to end this policy and a vote on the issue was blocked by House leaders.

That hiccup is cleared now by the Congress until the remaining part of the Fiscal Year 2018. In fact, some of the Congressmen want to go a step further than the present medical marijuana protections by adding a major provision that would protect all state cannabis laws, including the ones that permit its recreational use, from federal interference.

The brickwork for the investing opportunity in cannabis in Canada was laid down in April 2017 with bill C-45 (popularly known as the “Cannabis Act”), which was tabled in the Senate to pave the way for legalization of recreational cannabis in Canada.

The bill is likely to become law this summer. With at least $5bn potential annual sales to begin with, early investors have an opportunity to generate exceptional returns in 2018, as long as they make well-analyzed and objective choices germane to Canadian cannabis stocks.

We hold 3 cannabis stocks in the GSB portfolio and have generated profits of 580%, 245% and 67% since buying shares. Now that the market has corrected sharply, we are looking to increase exposure on this dip. Many quality names in the industry are selling at very low multiples given their margins and growth trajectory. In particular, we are targeting and up-and-coming producer that has flown under the radar of most investors. They are currently in the process of building one of the largest and most high-tech greenhouses anywhere to service both the Canadian and Californian markets.

Get all of our stock picks, model portfolio, weekly updates and the top-rated monthly newsletter by subscribing today for just $97! For a limited time, new subscribers can take 50% off the trial price by using the coupon code “trial50″ during checkout. Click here for instant access!